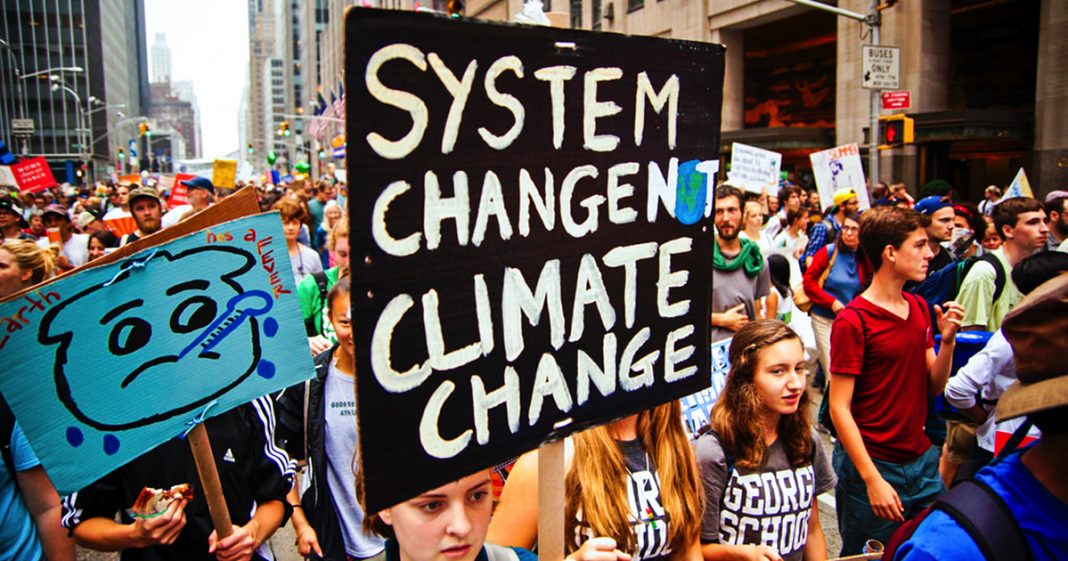 Have you noticed that Republicans love to use terms like “government overreach” and “job-killing regulations?” Ring of Fire’s Sam Seder and Farron Cousins talk about how conservative politicians are using these types of terms to cause fear in their voters in hopes to stifle action on Climate Change.

Sam: Farron, this week, President Trump was in Europe, at one point visiting with the pope and then at the G7 summit. Of course, we know that one of the things that came up with the pope in particular, and then also with the G7 summit via the French and others, was an attempt to get President Trump to commit to staying in the Paris Accords. As you know, Farron, the Paris Accords are not in any way binding on the United States or Trump, or anybody frankly. It’s simply an agreement, and it’s one that just simply signals that we’re going on make an effort to do this.

It has benchmarks, but none of it is binding. It’s not a formal agreement in that sense. It hasn’t been signed off like a treaty. It basically just says we are going to try and reach certain benchmarks. Benchmarks, frankly, that were not terribly aggressive. We’ve almost come close … We’re certainly going to get there just on our normal trajectory at this point. But it signals to other countries like China and like India and then other countries around the world that we’re going to take this seriously, too. It’s very important in that regard.

It remains to be seen, but there’s this broader question that I know you touched on in your piece about how is it that the climate does not seem important to Republicans?

Farron: It’s a really interesting question, and one I’ve thought about for a long time because when we look at polls, really over the last year, we know that a majority of registered Republicans, small majority but a majority nonetheless, understand that climate change is real and that human beings are making it worse. A very large majorities obviously of Democrats and independents feel that way. Yet, at the same time, the majority of the Republicans sitting in Congress right now do not agree with the scientific consensus that climate change is real.

So you have this question of why is it that you understand something, but you vote for somebody who says that this is wrong? What I’ve found through my research with this and spending years, really, working on this is that it really just boils down to fear, and how Republicans process fear in their brain, and how Republican politicians use that to manipulate them and to really just kind of boil it down into the most basic parts.

So it switches the fear. Instead of being fearful of what’s going to happen to the climate, which is unfortunately a little bit more of a far-off threat, not that far-off but further off than the threat of not being able to feed your family next month because you lose your job. It’s an irrational fear. It is a fear that is not backed by any of the scientific evidence that shows us that these environmental regulations not only create more jobs than could possibly be lost by regulations, which is minimal, but they also create a net economic gain for these communities. So these regulations actually create more jobs, they create economic revenue.

Everybody wins in this situation except maybe a coal CEO who has to pay a few extra dollars a year to comply, but that part of the conversation is left out. It’s a little more difficult to explain, and that’s why these voters consistently will go against their own best interests. To be honest, this same scenario plays itself out with a lot of different issues as well.

Sam: I want to dig into this a little bit. Just as a sort of tangentially, your point about regulations ending up driving innovation, we’ve seen this time and time again, whether it’s with the raising of café standards. We’ve seen it creates innovation with auto makers. Even the famed horrific, oppressive regulations involving light bulbs. The reason why we now have a whole new class of LED bulbs that are significantly better is because of these regulations. People are finding them to be more effective and lasting longer. The price has now gone down, et cetera, et cetera. Those are just two examples that come to mind because we heard so much about how oppressive the light bulb regulations were going to be. All right.

If the argument is that Republicans are able as politicians to convince their voters that, to the extent that their voters believe that climate change is real and is manmade and is a concern, the argument to these voters is that concern is dwarfed by how oppressive and how much of a danger the solutions are going to be to you. So for them, the question of climate is their fears, it’s basically a remote, not just possibility, but it’s remote both in terms of the future and in terms of how directly it affects me the voter, whereas you’re saying that the regulations would inhibit their economic growth and perhaps hurt their families.

But let me ask you this. I remember once sitting on a panel on some cable show with Christine Todd Whitman who made the point, and this was three or four years ago, so the story’s always changing a little bit, but at that time, the popular refrain was that, well, liberals are so pushy about it and so self-righteous about it that it forces Republicans to act irrational about it. If you find yourself and you’re a grownup and you’re making that argument, and you’re making it on behalf of other grownups, I think you should be pretty embarrassed for yourself and those other grownups.

But I do think that there’s something to the idea that being a climate change denialist or believing that the concerns are overblown has become just another cultural signifier like guns, like God, like heartland values or whatever they want to call it. All of that, I think, has just become, it’s just an identity issue for them. That ‘I just wear this because I’m on Team Red,’ so if tomorrow Donald Trump came out on said, ‘We found out that it was real,’ then it would be reversed. I can’t help but think that’s the case, that it has really just become one of those sort of like, we’re in the club together.

But, look, let’s take a quick break. When we come back, I want you to address that, and we got some other things to talk about, too, that I know you’ve been working on. We’re going to take a quick break. I’m Sam Seder. This is Ring of Fire Radio. I’m here with Farron Cousins of ringoffireradio.com.