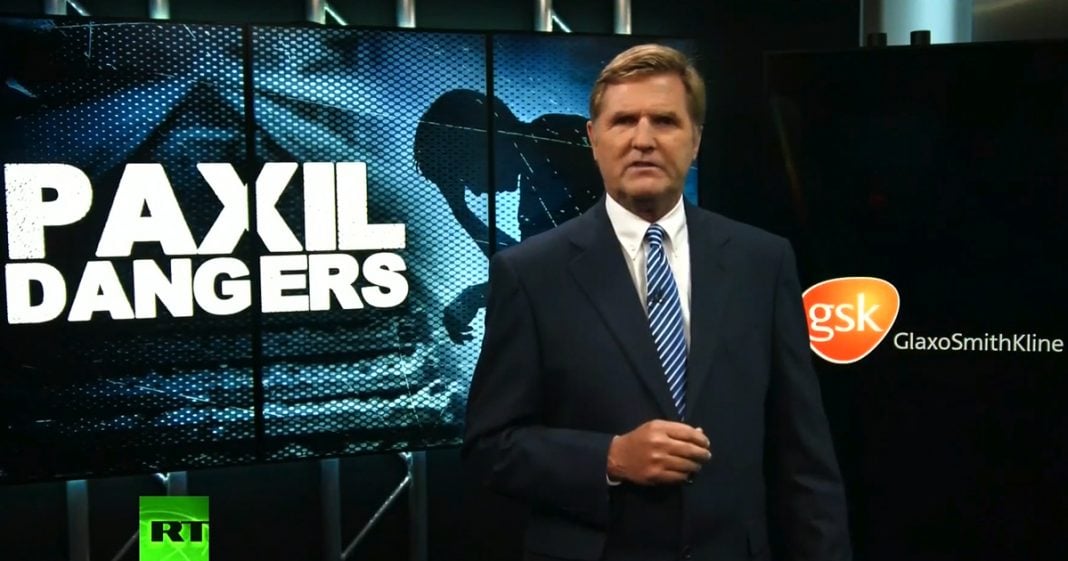 Via America’s Lawyer: Mike Papantonio discusses the case of Stewart Dolin, a man who committed suicide after taking a generic version of the antidepressant Paxil. Then Mike Papantonio speaks with attorney, Michael Baum, about what the maker of the drug, GlaxoSmithKline, knew about the increased suicide risks associated with the drug.

Papantonio: According to The National Institute of Mental Health, in 2015 an estimated 16 million Americans experienced at least one major depressive episode. That’s almost 7% of the population over the age of 18. But Big Pharma doesn’t see that number as 15 million people who are suffering, they look at it as 15 million people they can sell pills to every single month.

There are dozens of different anti-depressants on the market today, with each drug company trying to capture as many of those 15 million patients as possible. And while anti-depressants have shown great promise in treating depression, many of them now carry warnings of an increased risk of suicide. That’s what happened with Stewart Dolin, a Chicago attorney who committed suicide by jumping in front of a train after taking the generic version of the anti-depressant Paxil. Mr. Dolin had only been taking this medication for 5 days when he committed suicide.

Glaxo Smith Kline, the maker of Paxil, had known for years that its medication increased the risk of suicide in patients, and for the longest time they attempted to cover up these dangers to keep their profits flowing. Paroxetine, one of the active ingredients in Paxil, had been studied by GSK since at least 1989 when the company first developed the medication and submitted their application to the FDA. According to some of the earliest studies produced by GSK, Paxil actually showed a decrease in suicidal thoughts and actions compared to placebo groups or at least, that’s the way the company presented it.

As it turns out, GSK was actually manipulating their own data to show an increased risk of suicide and suicide attempts among placebos that didn’t exist in the way it was presented. And again, GSK did this to convince the FDA that its anti-depressant was safe. An internal email from the company from 1999 showed that the studies had been manipulated to count placebo suicide attempts that should not have been counted at all. The internal email also laid out the many ways that GSK was twisting data for their FDA approval.

In 2004, the FDA ordered GSK to include a black box warning for its drug showing an increase in risk of suicide in young users, but it didn’t specifically mention patients over the age of 24. In April of 2006, nearly 7 years after GSK’s own internal documents showed that the company knew it was misrepresenting its findings, GSK finally decided to re-analyze’ its data and found that yes, Paxil does in fact cause a statistically significant increase in suicidal thoughts and actions in adults with Major Depressive Disorder and yet the product label was still not updated to reflect this fact.

That brings us back to the case of Stewart Dolin. Had Glaxo properly warned doctors and patients, and even the FDA, about the dangers they understood 20 years ago, Mr. Dolin might still be alive today. Joining me now to talk about the dangers of Paxil, is attorney, Michael Baum, one of the lawyers who represented the widow of Stewart Dolin in court. Michael, start by telling us about the early studies from Glaxo about what they knew about the safety of Paxil. Give us a rundown, if you would.

Papantonio: Michael, that should have been enough to put them on notice right then that something’s not right.

Michael Baum: Yes. They had 42 suicide attempts that they’d listed and that was about a 3% rate at the time. That should have been viewed as a frequent adverse event. But they reported as if it wasn’t and said it wasn’t a significant risk. They said that people who are depressed tend to commit suicide or have suicide attempts as a problem. They conveyed the impression that it wasn’t an important risk to consider for labeling purposes.

Papantonio: The way it appears you tried this case is that you used their own documents against them. You used their own internal documents and you said this is what they had in their file cabinet while they were lying to the FDA. How did the company present this data to the FDA? Did the FDA bother to even question their findings? What’s your take on that?

Michael Baum: The FDA gave them a pass. In 1990, there was a study by Teicher and Cole that put the world on alert that there might be suicidal behavior and suicidal thoughts associated with antidepressants and the serotonin reuptake inhibitor, new type of antidepressants. The FDA asked all the manufacturers like GSK to go through their studies and compile their suicide data. GSK did that. When they did it, they did not identify that those events had occurred in the pretrial period and the run-in period as having occurred before the trials began. They treated them as if they happened during the trial. That washed out about a nine times greater rate of suicidal behavior among adults.

Papantonio: I’ve tried plenty of these cases and I’m always fascinated by what we find in documents. So many times, the jury actually gets to see the mindset of the company by way of the documents that you produce. What did you find from the documents in this case about what they knew, the dangers of Paxil, and how do you think that impacted the jury in this incredible result that you were able to get? What documents stick out in your mind as far as it showed really the culpability of this company? What’s your thought?

Michael Baum: I’d say there’s three or four that do that. The one I was just getting ready to tell you about is the suicide report they gave to the FDA that reported as if that it reduced suicidal behavior by including events that occurred during the run-in phase and counting them as if they were placebo events to balance out the 42 suicide attempts and the five suicides that occurred on Paxil.

By making that risk look lower or non-existent, they actually published papers in 1995 saying that it reduced suicidal behavior and suicidal thoughts, when it was the opposite. That’s what they gave to their marketing people. We got one of their marketing documents saying, ‘Hey, use this study that reports this data that said it will reduce suicidal behavior to give to all of your doctors.’ That’s a pretty damning document because all those numbers were false.

Papantonio: What you’re describing is just run-of-the-mill fraud. I mean, that’s what you’re describing. There’s nothing dressed up about it because it’s a pharmaceutical company and they got the numbers wrong. This is absolutely black-letter fraud. How much impact did that have on the jury when they see this is a company selling this product they know is going to kill people and they’re committing fraud in the process? What’s your take?

Michael Baum: I think that many of the jurors were very upset about it. We weren’t actually allowed to interview them afterwards. We don’t know exactly what their take was. I can tell you from reading their body language, and the way they reacted to the documents, and the way that GSK’s lawyers tried to minimize them, they weren’t buying it. They bought what the document said. There were the GSK’s own documents.

The one document you referred to earlier in 1999, where internally one of the guys says, ‘Hey, we’ve been counting these pre-baseline, pretrial events as if they were post-trial events. We actually published an article about that. Well, that’s not actually true because we have an elevated rate of suicidal behavior. We need to fix that.’ They didn’t fix it. That’s a pretty document for them.

Papantonio: Michael, tell us about the case you handled for Wendy Dolin, the widow of Stewart. We’ve got about a minute and a half. Just give me a thumbnail sketch about that case, would you?

Michael Baum: This is a guy who had a great life. A really good guy, well-loved by all his friends, his wife, his kids, was making about a million dollars a year, was well-respected in his field, was well-respected within his law firm. Had everything going for him, but he was in the mergers and acquisitions and security side of Reed Smith, which is, you know, a very high-profile law firm.

During the financial collapse in 2008, 2009, it wasn’t good for mergers and acquisitions. They were going through a rough time. He personally pulled through it, but was having some anxiety during the time, was a little depressed about how things were going, but he was having his best year ever. His doctor thought, ‘Oh, you know, let’s give you some Paxil to get you through this.’ He put him on Paxil. A week later he jumped in front of a train. This is a guy that had everything going for him.

Papantonio: The jury came back and they looked at this entire story and concluded what? What was the award in this case?

Michael Baum: The jury found that Paxil, the defective Paxil label caused Stewart Dolin’s death and awarded the family $3 million for the wrongful death. The things that are to takeaway that are important from that is it was generic Paxil and they found that the brand manufacturer, GSK, was liable for having not made the changes to the label about the adult suicidality that they knew about.

Papantonio: Okay. Michael, great job. You’re a fine lawyer. One of the best on the West Coast. I’ve got to commend you. This is a tough case. I followed it. I know how tough it was. Thanks for being out there.