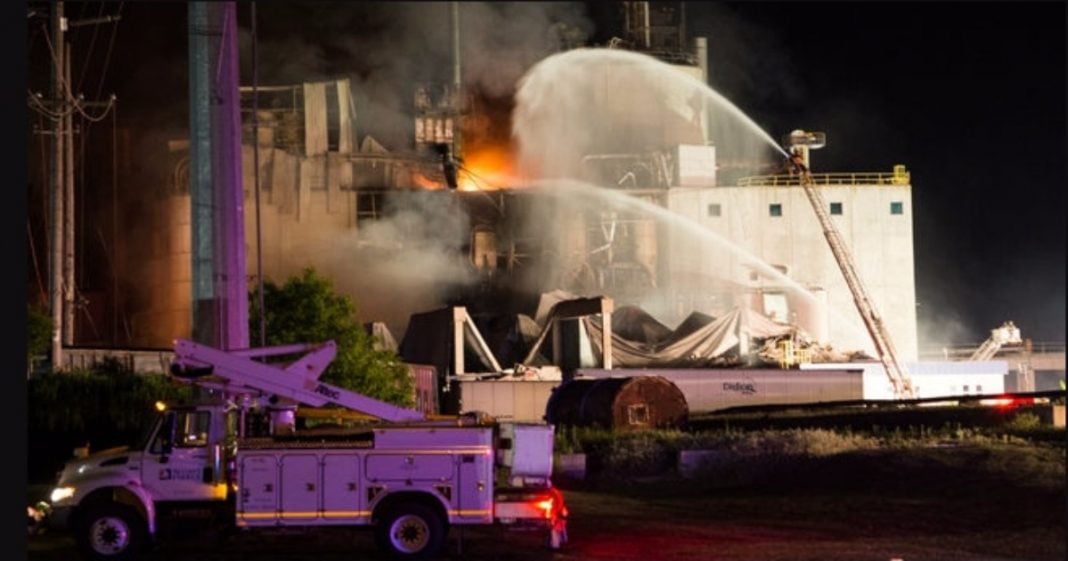 A Wisconsin mill which processes corn products exploded on Wednesday overnight, injuring most of the workers present at the facility and killing one.

The Didion corn mill, located in Cambria, Wisconsin, exploded unexpectedly at around 11 at night, injuring 11 of the 16 employees present at the facility. One of the employees was killed in the blast, while two remain missing in the wake of the incident.

UW Hospital confirmed to Channel 3000 that five of the employees were currently patients there, being treated for their wounds.

The explosion occurred in the portion of the plant which processes ethanol, a highly flammable fuel source. In the wake of the explosion, firemen arrived on the scene and attempted to battle the still burning fires at the facility to rescue people still inside.

One dead, 14 injured, and two still missing after a large explosion at the Didion Corn Mill Plant in Cambria. The cause is still unknown. pic.twitter.com/byXfeF7SdZ

Though the majority of those inside were rescued or able to escape on their own, two are still missing.

Nayeli Hernandez, who has worked at the plant for over three years, told News 3 a group of her friends were trapped inside the building after the explosion. She said two of them are out safe, but two are still missing.

“I got a phone call from my brother. I called a coworker who is another lab tech. They were trapped inside. A big explosion happened, then everything just collapsed,” Hernandez said.

Mill President Riley Didion says the company is still not sure about what could have caused the explosion, and they are investigating the issue.

According to OSHA records uncovered by WISCTV News 3 reporter Chris Gothner, Didion Milling had previously been cited for “serious” safety violations as recently as 2011. Since 2007, Didion had received 12 violations.

Explosions related to ethanol are not uncommon, though the majority of such explosions usually occur as the energy source is being transported via trains.

In March of this year, a train hauling 100 cars full of ethanol derailed in Iowa. 27 of the cars left the track and eight of those ruptured and caught fire. Three of the cars spilled into a nearby water source, releasing 1,600 gallons of ethanol into the water.

Ethanol is considered to be far more safe than other liquid energy sources like oil, especially in transport, but the explosion at this Wisconsin mill is a reminder that ethanol must be handled just as carefully if we are to guarantee that alternative energy sources do not come at the same human cost as more traditional methods.