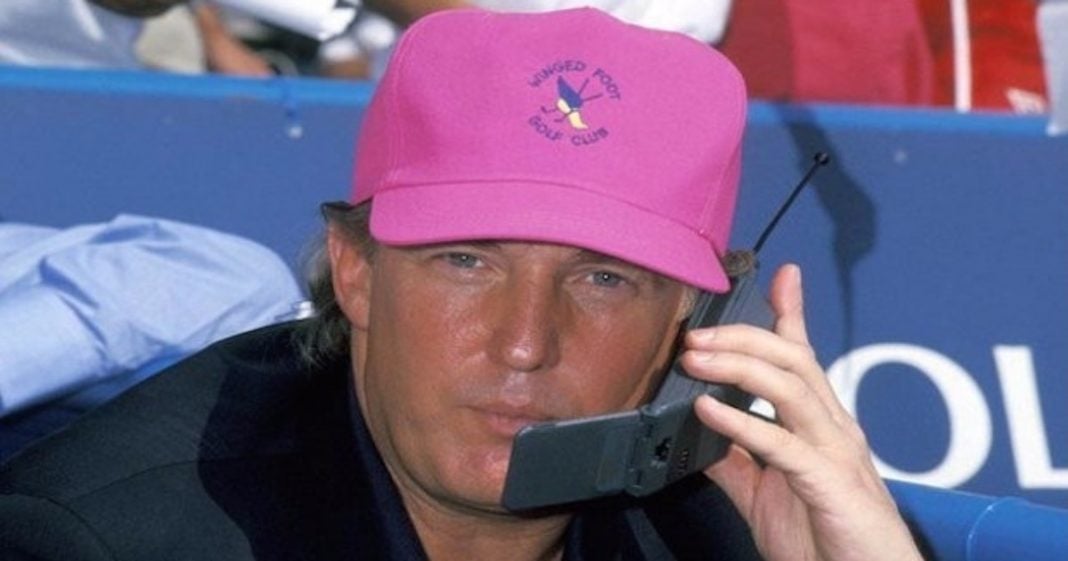 During Trump’s 9-day international tour in which he visited the home of the world’s three major religions, rubbed a glowing orb, was jilted by his wife, and made a big money deal with Saudi Arabia, the POTUS also reportedly tried to trade phone numbers with fellow world leaders at NATO.

On Tuesday, it was reported by the Associated Press that Trump had attempted to hand out his personal cell phone number to world leaders, urging them to contact him directly, bypassing the usual decorum and ceremony involved in such conversations.

Of course, the wish for a personal, private connection to these world leader makes one fear that Trump is up to no good, but what seems more likely is that he is merely trying to conduct business as usual, the way he did when he was a billionaire business man. The breach of decorum, though clearly outside of the norm before Trump, was perfectly in line with his past behavior and the way he does business.

President Donald Trump’s career before becoming leader of the free world involved, most of all, strong personal relationships. It was through these relationships that Trump was able to pull off major deals and bring powerful men and women into his fold.

For Trump, the business of business isn’t just in making a deal, but in making a deal with a friend, something that has helped him to great success in the past. Unfortunately, Trump has learned throughout his short tenure as POTUS that such personal relationships are not always possible, nor advantageous in the White House as they are in the business world.

Many suggest that the nation should be run like a business, but Trump has found that when it comes to working with world leaders and even members of his own White House, fostering a personal relationship is more likely to cause ridicule and alienation than to produce an amenable deal.

In a scathing article published in the New York Times, sources say that former FBI Director James Comey was forced to repeatedly fend off attempts at friendship from the President. From hugs to impromptu phone calls just to chat, Comey was repeatedly forced to put space between himself and the President, space that Trump clearly didn’t want.

In Comey’s case, to be “friends” with the President meant that he was unfit to investigate the POTUS, an action that Trump was clearly pursuing. In one public instance, Comey attempted to blend into the curtains behind him at a White House event in the hopes of evading Trump’s attention, but was instead summoned and pulled into a friendly hug.

“Comey said that as he was walking across the room he was determined that there wasn’t going to be a hug,” Mr. Wittes said. “It was bad enough there was going to be a handshake. And Comey has long arms so Comey said he pre-emptively reached out for a handshake and grabbed the president’s hand. But Trump pulled him into an embrace and Comey didn’t reciprocate. If you look at the video, it’s one person shaking hands and another hugging.”

World leaders abroad are not so inclined to tread carefully, and some, like Angela Merkel and Emmanuel Macron, have outright snubbed the President publicly. For these leaders, a Trump phone number is not just inappropriate, it’s insulting.

Regardless of Trump’s past business dealings, his efforts to bypass diplomacy and procedure to speak privately with world leaders is troubling. It is not only tradition for world leaders to speak publicly, but for transcripts of those conversations to be provided to the press and public at-large. If Putin calls Trump on his cell phone, how can the U.S. have any idea about what information is shared?

With so many questions about the Trump administration’s honesty and accountability, the idea that Trump may be speaking privately with leaders, both enemy and ally, is deeply troubling and cannot be allowed to continue.