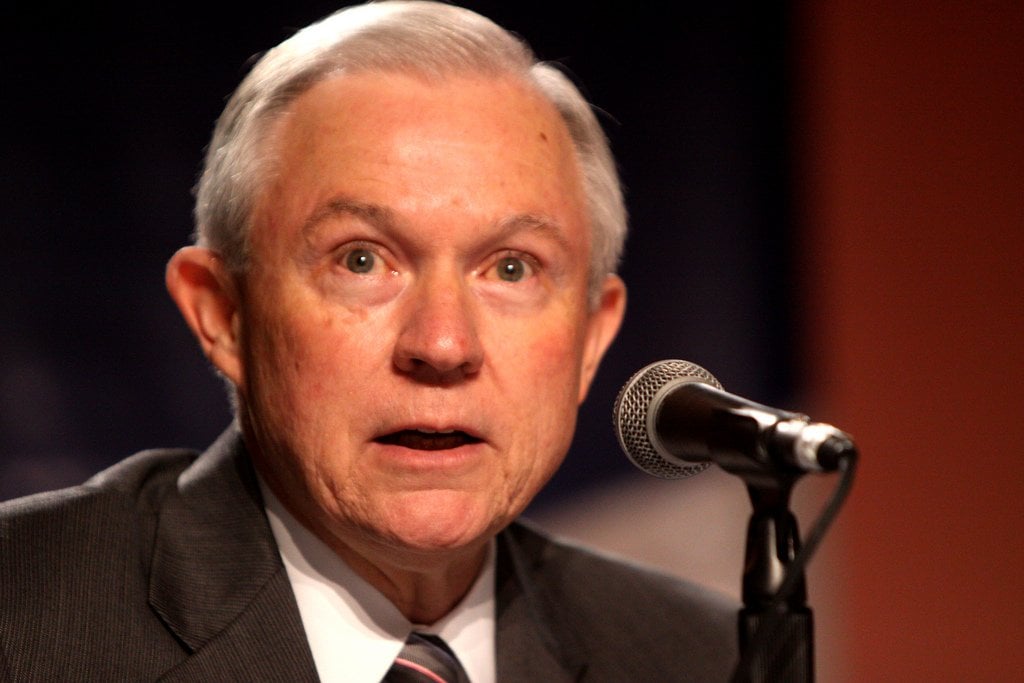 Attorney General Jefferson Beauregard Sessions, III has been busy beating his chest, vowing to fill already overcrowded U.S. private, for-profit prisons (a dubious industry to which he has indirect ties) – mostly with small-time drug offenders and people of color.

He has rescinded all of the Obama Administration’s directives giving prosecutors more leeway to push for more lenient sentences, particularly for low-level drug offenders. Sessions, who by rights should be removed from office and disbarred, is demanding the most draconian punishments for natural people for the slightest misdemeanors – but for corporate “people” involved in murder and grand larceny, a slap on the wrist will be sufficient, thank you very much.

Last week, Session’s Department of so-called “Justice” announced that it would not seek prosecution of Citigroup’s Mexican subsidiary, Banamex – despite overwhelming evidence that the bank was involved in laundering money across the U.S.-Mexico border to the tune of over $9 billion from 2007 to 2012.

Instead, Banamex USA has “admitted to criminal violations by willfully failing to maintain an effective anti-money-laundering [policy],” while parent company Citigroup will pay a $97.4 million fine (an insignificant fraction of the company’s nearly $1.8 trillion in assets) for violating the Bank Secrecy Act.

Needless to say, not one executive will be going to private prisons – or any other lockup facility. This is despite the fact that Citigroup employees had reason to believe money laundering was taking place – and failed to take action as required by law.

According to evidence presented to the DoJ, Banamex USA processed over $8.8 billion in money transfers from the U.S. to Mexico over a five-year period. Those transactions generated more than 18,000 alerts – yet Citigroup investigated fewer than ten of the cases and filed only nine reports. The company’s excuse: its compliance unit had only two staff members available to carry out the investigations.

This, from a global banking conglomerate that took in almost $70 billion in revenue last year.

It’s not the first time Citigroup has gotten in trouble over its Mexican operation. In 2015, the California Department of Business Oversight imposed a $40 million penalty on Banamex USA because of its failure to comply with federal anti-money laundering programs. The year before, Citigroup reported $15 million in fraud connected to a security services company operated by Banamex for the protection of its board members and their families. The company had been submitting false expense claims and offering its services to third parties.

Citigroup is in the process of closing down its Banamex operation, which is scheduled to cease operation on June 30th. Still, in light of these repeat offenses and Citigroup’s inability to control its corporate offspring, it is significant that Sessions’ Department of “Justice” is letting it off so lightly at the same time it is determined to destroy the lives of natural humans for possessing a few grams of narcotics. Keep in mind that money laundering is connected to mass murder, terrorism and global drug and illegal weapons trade.

That alone should tell you all about Sessions’ priorities and how much he values human life.

It isn’t the only time Sessions has kissed corporate butt since being given the job. Last Friday, Esquire posted a story about a military veteran who had his home foreclosed while on his third combat tour. The veteran, Sergeant Jacob McGreevey USMC, sued the mortgage company under the Servicemembers Civil Relief Act.

The corrupt mortgage company, PHH, had already been in trouble with the Consumer Finance Protection Bureau (CFPB) over a kickback scheme with its servicers. Sessions came to the rescue – on behalf of PHH and against Sergeant McGreevy. Sessions went to bat for PHH on a previous occasion when that company attempted to sue the CFPB, claiming its structure was “unconstitutional.”

If you had any doubts about who is pulling the strings in Washington D.C., Sessions’ recent actions should dispel those once and for all. To this hypocritical, racist redneck, minor infractions by human beings deserve the harshest penalties available – but felonies by corporations rate barely a slap on the wrist. This is a major reason why lawyers are now turning to civil litigation in order to hold these financial institutions accountable – because the criminal justice system under the Trump Administration certainly won’t.