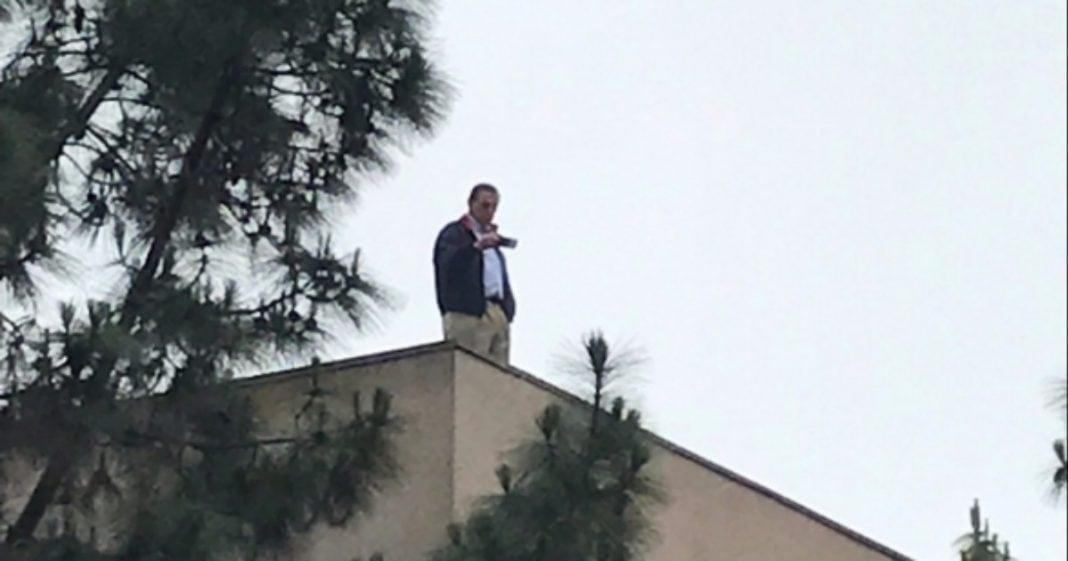 On Tuesday afternoon, Congressman Darrell Issa responded to the inquiries of his constituents in a unique way – by hiding out on the roof of his District office in California.

The Republican Congressman hid out on the roof of his office on Tuesday in response to a group of angry voters who appeared at his office hoping to share their gripes with the elected official who has refused to hold a Town Hall in recent months.

The hundreds of protesters who waited outside Issa’s office were promptly ignored by Issa who chose to hang out on the roof of his building taking photos rather than listen to what the people below wanted.

Several hundred in front of @DarrellIssa‘s office this AM. Issa came out for 5 minutes but refused to engage with those across the street. pic.twitter.com/z6XEw1FPLy

Issa is just one of many Republican lawmakers who have in recent months held incredibly restrictive Town Halls or refused to schedule them at all.

In Issa’s case, the Rep. held a town hall of sorts in March with a particularly sneaky feature. By giving sympathetic voters “early access” to the event, Issa was able to fill the venue’s limited seating with voters who were happy to see Issa, keeping out those who had legitimate grievances. Issa sent postcards announcing the event directly to constituents in particularly Republican-friend neighborhoods in an attempt to block any disgruntled Democrats from attending.

By employing such sneaky tactics, Issa left angry constituents no other recourse than to show up at his office to express their anger.

Other Senators and Congresspeople have chosen to skip their town halls as well, and in some cases, angry constituents have resorted to holding official-free Town Halls.

The lack of accountability being displayed in the Republican party as of late is staggering. From congressional candidates who assault reporters to elected officials who are driven to the roof to hide from the people who pay their paychecks, the culture of the Republican party is degraded beyond repair.

Fortunately, a Democratic opponent seeking Issa’s seat in 2018 is hoping to capitalize off of the bad press from Issa’s behavior. While the photos of Issa on the roof circulated, Mike Levin simply stated, “Yes, this is really @DarrellIssa on the roof of his district office building. Too afraid to come speak with assembled constituents below.”

Yes, this is really @DarrellIssa on the roof of his district office building. Too afraid to come speak with assembled constituents below. pic.twitter.com/wCYRjO8Ev8