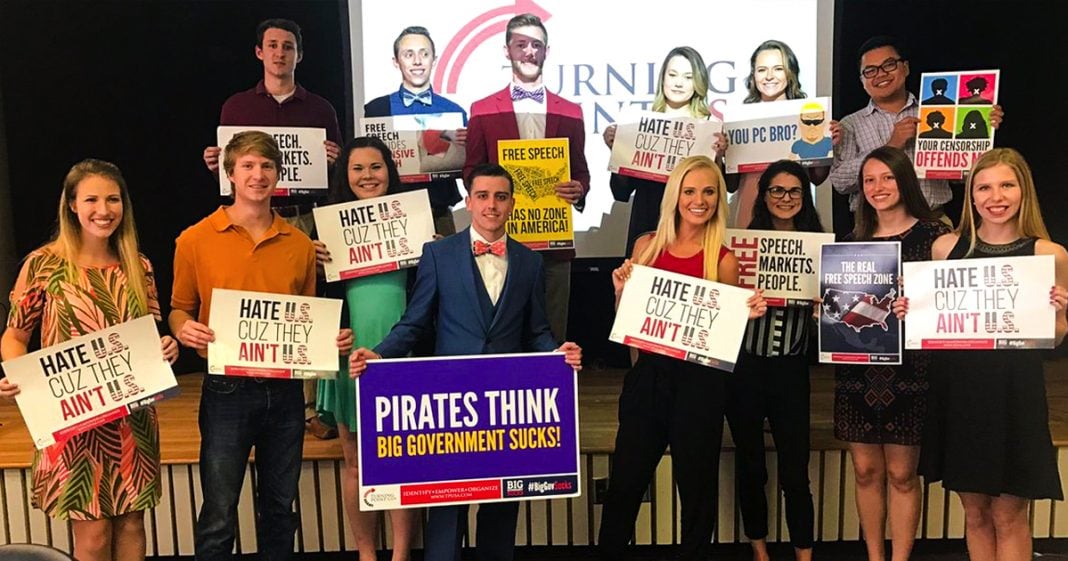 Conservative college students feel like they are losing the battle when it comes to ideology in higher education. Investigative journalist, Michael Vasquez, joins Ring of Fire’s Sam Seder to talk about a counter movement to get right- wing college students elected into student government positions led by the group Turning Point USA.

Sam: Mike, the biggest I guess story that we have generally heard in the news is about I guess presumably liberal college students, or maybe a little bit more to the left of liberal, but broadly speaking, liberal college students becoming very PC, and denying, if we were to take the news reports seriously, hundreds and hundreds of people opportunities to speak at universities. It is all George Soros-funded, and some type of great conspiracy.

The reality is that to the extent that there’s some type of outside influence in organing students, it seems that conservatives have built quite a machine.

Michael: I think machine is probably the appropriate word here in terms of what Turning Point USA and Charlie Kirk specifically, this up and coming conservative superstar. What he has built is a national operation that is active. They say that they have a presence in more than 1000 college campuses around the country. They’ve done a lot of things, from inviting controversial speakers like Milo Yiannopoulos to campus to being involved in the larger free speech debate on campus.

The interesting thing that we found is that they have a very heavy hand when it comes to student government elections. They’ve been extremely aggressive in terms of recruiting student government candidates, helping their campaigns through funding of various means. It could be anything from $7000 or $8000 worth of campaign T-shirts to providing get out the vote staffers. They’ll actually provide staffers to walk around campus and round up voters, if you will.

Sam: We’ve got to back up a little bit, because in some respects, this is mind-blowing. It sounds almost like a screenplay. First start off. Tell us who Charlie Kirk is.

Michael: Charlie Kirk is a 23-year-old conservative superstar. He started this, his organization, Turning Point USA, which legally speaking is a 501(c)3 nonprofit, a couple of years back instead of going to college. Basically, he was 18 years old, and he was able to convince some deep-pocketed GOP donors to get behind him early on. If you’re a regular Fox News viewer, you know who Charlie Kirk is. He’s on Fox News quite often, and he has become one of the go-to voices on Fox News to provide the millennial perspective, if you will, on what’s happening on college campuses.

I believe about five years ago, his organization, Turning Point, their budget was maybe about $52,000 or so. Last year, they had $5.5 million to spend. One of the things that they are spending very aggressively on is student government elections.

Sam: There’s an organization out there, $5.5 million that’s spending. Do you have a sense of what percentage of that 5.5 million annual budget they have goes to student elections? Just saying it sounds bizarre.

Michael: It does sound a little bizarre. The short answer there is no. The tricky thing with Turning Point is that even though their involvement in student elections is quite clear, and at this point rather obvious, there have been some cases that were documented by student media such as Ohio State University and the University of Oregon. There were some controversies in those elections involving Turning Point, because oftentimes when students find out that Turning Point is secretly backing some candidates, there’s quite a lot of pushback from students.

Even with all of that, and then there were plenty of other examples that I was able to find through my own reporting, but when we asked Turning Point point-blank about this, they basically flat out denied that they were even playing in this game, and that they were even active in the student government front. All we have to go off of is some of their comments, comments to students that were meant to be private but ended up leaking out to the public. In private conversations with students, Turning Point has mentioned that this is a top priority for them, that this is a big priority for their donors specifically.

That was something that came up over and over again as I spoke with folks who used to be affiliated with Turning Point in one way or another. They mentioned that this whole student government push, which on the surface is perhaps designed to elevate conservative voices on campus and to put conservative students in positions of leadership, former Turning Point insiders repeatedly told me that this was a top priority for the donors. Certainly Charlie Kirk is out in front and all of this, but it’s the big deep-pocketed donors here that apparently really want to score some victories on college campuses.

Sam: Is Turning Point just one? I went to a small college. I went decades ago, and I ran for student government president. I don’t know that I’ve ever mentioned that on air. I won.

Sam: Thank you. I did not have any financial backing. It wouldn’t have even occurred to me that anybody was even interested in backing me. Have elections changed, maybe on bigger schools? Are there other Turning Points? Are there people of other political ideologies that are out there seeking funds? When these candidates get approached, are they like, ‘Are you serious? Is this type of scam?’ I don’t understand how people are dropping thousands of dollars into these races on these campuses. Is it unique to Turning Point, or is it something that’s a phenomenon that’s going on?

Michael: At this point at least, it’s largely unique to Turning Point. In my discussions with folks who have been involved with student government, these are either current student government presidents or former presidents who maybe were elected last year and are basically on their way out, what was telling is, on a bipartisan basis, there were some Republicans I spoke with as well who were active in student government, there was a lot of alarm at what Turning Point is doing, because there was this fear that you could have the student voice essentially being co-opted by outside interests.

In its defense, when I spoke with Charlie Kirk, the head of Turning Point, he argued that there’s nothing to see here, that what they do is no different than, let’s say, fraternities and sororities encouraging their members to become active in student government. That does happen. You’ll have progressive groups that might, College Democrats, College Republicans, that might encourage their members to run, but there’s a big difference between saying, ‘Hey, you should think about student government,’ and actively, in the case of Turning Point, an outside entity that is actively acting as campaign manager in these races, not only pumping thousands of dollars into providing students with supplies and all sorts of things, get out the vote resources, but also helping them craft their message, designing their campaign logos, really getting in the weeds in the sense of actually running their campaigns.

That was what some of the documentation showed, that you had email exchanges back and forth where Turning Point employees would be debating what color the campaign T-shirts should be, and saying, ‘I think I like this color better than that color,’ and really running the show to a large extent. It’s unprecedented. At least that’s what student government leaders have been telling me, is that they’ve never seen anything like this before.

Sam: Do people show up on campus? Do they send Turning Point campaign commandos in? Are they college students? do people say, ‘Hey, what’s that? Why are you hanging out with this 35-year-old guy who’s walking around telling you what you should be saying in terms of what you’re going to be promising to bring to student government?’ Is it a little bit more subtle than that?

Michael: No, in some cases, that’s exactly how it happens. There are these older folks who are in their 30s, and they’re clearly not students, who will be part of the cavalry, if you will, that Turning Point sends to campuses, this get out the vote machine. One of the things that they are known for, is in many college campuses, you will vote electronically and you can vote on an iPad, if you will.

What Turning Point will supply sometimes is not just the manpower of a bunch of people who will roam the halls finding voters, but they’ll also be armed with iPads, which has a potentially coercive element to it. It’s that if I’m the Turning Point campaign worker, and I go up to a student, and I say, ‘Hey, are you interested in voting today? I’ve got the iPad in front of me if you want to vote.’ If I as a student decide to do that, the campaign worker’s looking right at me, and they’re going to espouse the virtues of the Turning Point slate of candidates, and then they’re going to watch me as I push the buttons on the iPad and vote, which could have a coercive element to it.

Certainly, at a number of campuses, students have noticed, ‘Hey, why is this old guy hanging around here? Why are these folks who are clearly not students getting involved in campaigns?’ There was a former University of Oregon student who mentioned to me how a gentleman who looked to be in his 30s came up to him during the campaign season and was pushing for the Turning Point slate of candidates. The student was just very bothered by this and said, ‘Hey, get out of my face, guy. You don’t belong here.’

Sam: I would imagine. Let’s take a break. When we come back, Mike, I want to ask you that same question but on a broader sense. Why? What is it that Turning Point A) hopes to achieve by getting Turning Point-endorsed candidates in positions of student government power, I guess, across the country? How sustainable is it? Because you can be a great politician, but you’re going to age out of college two or three, four years later. How successful have they been in electing their own people? Then lastly, we’re going to find out what Uber has to do with all of this. We’re going to take a quick break. I’m Sam Seder, Ring of Fire Radio.