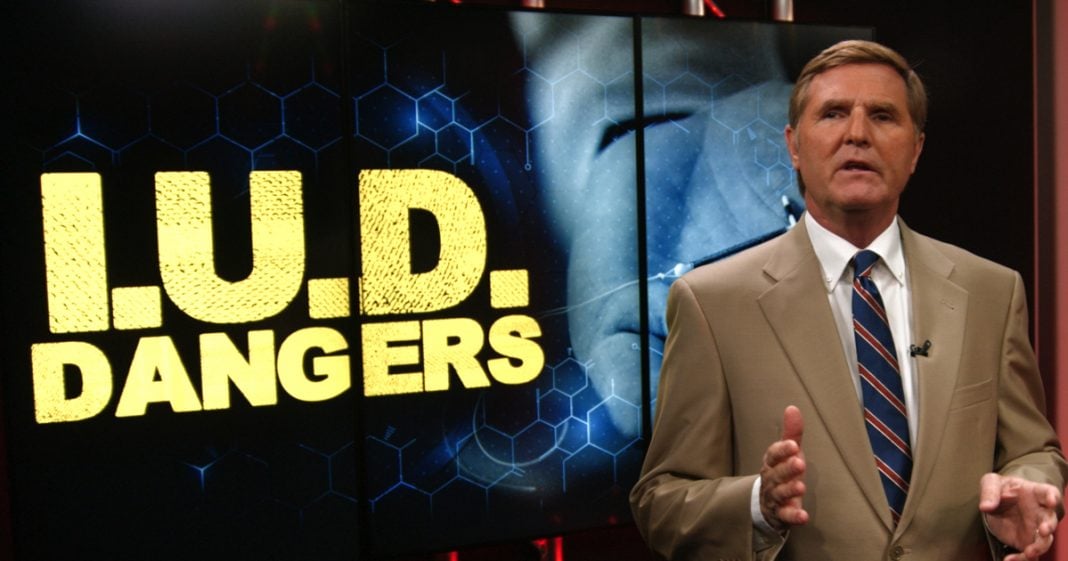 There are currently 61 million American women in their childbearing years ranging in age from 15 to 44. 62% of these women regularly use a contraceptive method, with 6.4% choosing to use an intra-uterine device or IUD to prevent pregnancy. America’s Lawyer Mike Papantonio talks about pharmaceutical giant Bayer and their huge moneymaker IUD device, Mirena.

There are currently 61 million American women in their childbearing years ranging in age from 15 to 44. 62% of these women regularly use a contraceptive method, with 6.4% choosing to use an intra-uterine device or IUD to prevent pregnancy. IUDs are small devices that are implanted into the uterus to prevent fertilized eggs from developing.

Over the last 15 years, IUDs have gone on to make up a larger and larger share of the birth control market and according to 2012 data; IUDs are the fourth most common form of birth control after condoms. IUDs have proven to be amazingly effective and convenient because they can be implanted once and will remain effective for many years without any interference. And as the market for IUDs began to grow in the early part of this century, pharmaceutical giant, Bayer, wanted to make sure that it could get a piece of the profits and introduced an IUD device in the year 2000 called Mirena.

Mirena is a chemical-coated, soft plastic IUD that proved to be a huge money-maker for Bayer. But part of the reason that this particular contraceptive was so profitable was because Bayer was deliberately over-stating the benefits of their device and not disclosing some of the rare, but very dangerous side effects.

For example, in April of 2009, the FDA had to issue a warning letter to Bayer Healthcare because its website for Mirena made a number of claims that were simply a lie, they were completely untrue. Bayer was so busy making claims that the IUD was a perfect solution for busy moms and would increase women’s sex lives while making them “look and feel” great, that it forgot to mention the device is recommended for women who have had at least one child already.

The company also declined to state that the Mirena IUD increases the risk of ectopic pregnancies — when a fertilized egg attaches to an area other than the uterus — And that of the few women that become pregnant with the Mirena IUD, half of them had an ectopic pregnancy. And they completely left out the fact that their Mirena IUD needed to be replaced every 5 years. Bayer also failed to tell women that there was a small risk that this particular IUD could either break apart or migrate after insertion, causing perforations in the uterus that would then lead to major medical emergencies.

The FDA might not have put it in these terms, but they strongly implied that Bayer was so desperate to make their sales pitch to women that they threw all of the warnings out in order to increase the sales of their alleged miracle contraceptive. But those weren’t the only problems associated with the Mirena IUD. The chemical coating on the IUD – a form of progestin – was released daily into a woman’s body while the device was implanted.

Later observational studies found out that this chemical, even after the device had been removed, had a small chance of leading to a form of hyper-masculinity in developed fetuses, resulting in improper development of the genitalia in unborn children. Further studies have also shown that Mirena increases the likelihood of breast cancer, decreased libido, ovarian cysts, and depression. They were all risks related to this product.

But again, this information was completely omitted by Bayer during their sales pitches. They saw that the IUD market was growing rapidly, and they wanted to make sure that Mirena was the name brand that women told their doctors they wanted. They wanted women to go to the doctor after seeing the advertisement, demanding this product.