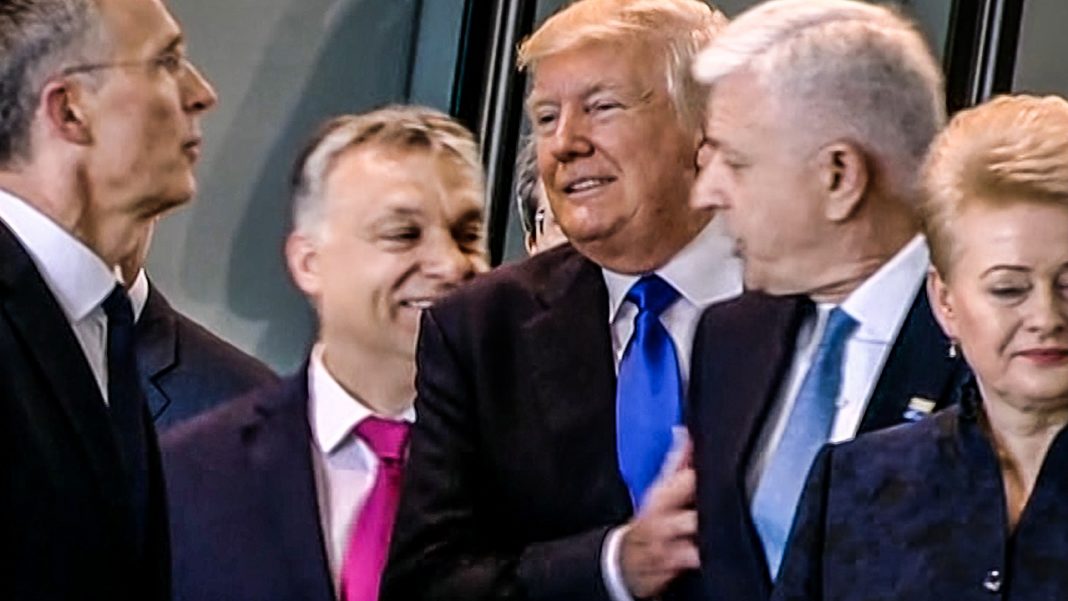 Donald Trump’s first overseas trip as President has come to a close, and it probably couldn’t have gone worse for the American public.  He shoved a leader of NATO, accused the organization’s member countries of not paying a debt that doesn’t exist, and insulted the German people.  All in all, it’s not a good look for the United States. Ring of Fire’s Farron Cousins discusses this.

Now, the billions he’s talking about is the 100 billion dollar arms sale that he made with Saudi Arabia, who experts say are helping terrorism flourish in the Middle East, so basically, he funneled a 100 billion dollars worth of arms to terrorists. Those millions of jobs he’s claiming he created, I have no idea where that claim came from because there’s nobody in this country that knows where these jobs are from or going or for, because they don’t actually exist. Donald Trump’s off his rocker on this when he just decided to add a little more to his Tweet cause he hadn’t hit the 140 character limit at this point.

But that aside, when you take a look at Donald Trump’s first overseas trip here, the entire thing from day one, literally from the moment he stepped off the airplane overseas, has been an unmitigated disaster. First and foremost, you had his wife, who on video, swathered away his hand, not once, but twice during this trip. She didn’t even want to touch him. Then, you had him in Saudi Arabia gathered around a magical glowing orb taking pictures like he’s meeting with some super villains. Then he meets with the Pope, who has to educate him about climate change, takes a picture with the man, who looks like he would rather be anywhere else on the planet then standing next to Donald Trump. You have the fact that after working for two days, he had to cancel several meetings because he was exhausted. He just couldn’t go on any more.

He tells us that Germany, while standing next German officials, is bad, very bad, according to Donald Trump. German cars are bad, we’re gonna stop bring those into the United States, while standing next to them. And, then, one of the worst things about this whole trip was when he shoved a NATO leader, so that he could be in the front row for a picture, or for the media, so everybody could see him. Shoved the guy out of the way, so people who could focus on him. Then, after that, he gives his little speech where he says that, look, a lot of you countries out here, 23 of the 28 NATO member countries, you owe a lot of money to NATO. You gotta pay up.

Here’s the thing about that NATO debt money he keeps talking about. It’s not real. It doesn’t exist. Nobody has a debt to NATO. The agreements within NATO specifically deal with how much those countries will spend on their own military to maintain their strength and help out in times of need, in times of war. When he’s talking about these people owe money, no, they’re just not spending as much on their military as other countries because they don’t have the money. Donald, nobody owes us money for NATO. Nobody owes NATO money. But, that didn’t stop our idiot-in-chief from going out there and saying these things that everybody can verify are untrue.

Throughout his entire trip, Donald Trump has embarrassed the United States. He has done nothing on this trip that should make anybody, liberal or conservative or independent, or libertarian, or Green Party. None of us should be proud of what the President has done on this trip. I mean, God, we thought things were embarrassing during George W. Bush’s tenure, like the time when he walked up to Angela Merkel and to massage her. That’s nothing compared to the embarrassment that Donald Trump has brought upon this country in just the last week.

He had been getting harangued for several months about not making a single overseas trip during his first 100 days, and after seeing what an embarrassment and a disaster his first trip was, I think now the talking point’s gonna be, please Donald, don’t ever leave the United States as a representative of this country, ever again.