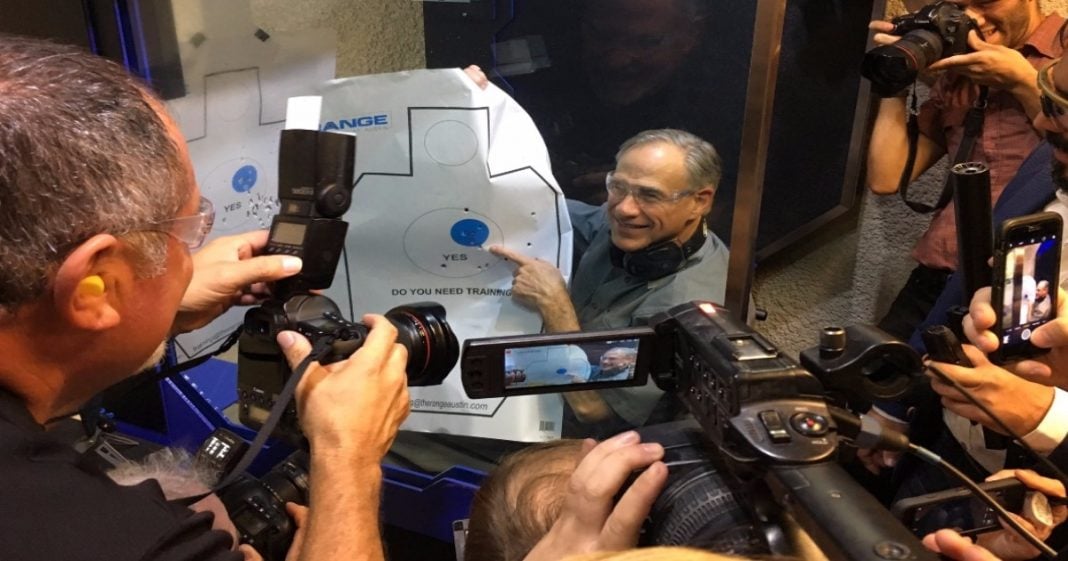 Texas Governor Greg Abbott had a bit of fun with the ongoing outrage surrounding Montana’s newest Congressman’s violent attack against a Reporter on Wednesday.

Echoing similar jokes from other elected officials regarding Greg Gianforte’s assault of a reporter, Abbott took the joke a bit further by carrying around a target practice sheet riddled with bullet holes. To cameras, Abbott said he was carrying the paper “just in case” he came upon a reporter.

“I’m gonna carry this around in case I see any reporters,” said Abbott.

"I'm gonna carry this around in case I see any reporters," @GovAbbott joked. https://t.co/ME7X8nbVx5

Abbott is certainly not the only elected official to have attempted to make a joke about Wednesday’s events, but the reality is that what happened to the Guardian’s Ben Jacobs is no laughing matter.

As many have noted since the attack, Gianforte’s actions against a reporter was a direct result of the degradation of public decorum by elected officials regarding the press, starting at the highest office in the land.

Before Trump and his rabid anti-media rhetoric took hold in America, an attack like one Gianforte perpetrated against Jacobs would have resulted in an immediate resignation. Instead, Gianforte issued a soft apology during his victory speech and will now head to the House in D.C. to serve Montana.

Unfortunately, the attack against Jacobs is just one of many oversteps against the freedom of the press we have seen in recent months. When even the White House insults and cuts off access to the press, how can we expect lower officials to respect the fourth estate?

Lobbing a joke at the media which you spend most of your time degrading is certainly not a good idea. Imagine if a member of the media had made such a remark in reference to Abbott? It would have been met with concern, an investigation, and a likely firing.

Instead, Abbott and the rest of the GOP are already laughing about the violent assault of what should be a protected class and Gianforte is headed to the House any day now.

Whatever your opinion of “the media,” we can all agree that they should be free to perform their duties in safety. Joking about shooting them does not fall under the umbrella of “safety” and Abbott should be chastised, not praised, for his in-poor-taste “joke.”