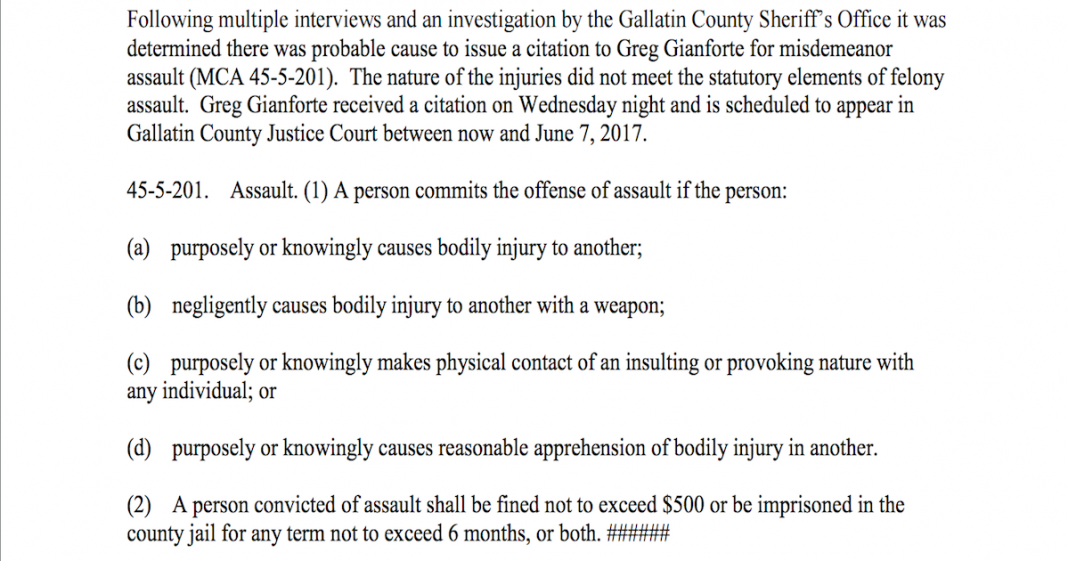 Just one night after being charged with assault, Republican Greg Gianforte defeated Rob Quist in Montana’s special election for a seat in the US House. Winning by a six percent margin, Gianforte apologized for an incident where he “body-slammed” The Guardian reporter Ben Jacobs:

“Last night I learned a lesson. And when you make a mistake, you have to own up to it.

That’s the Montana way. Last night I did make a mistake. I took an action that I cannot take back. I am not proud of what happened. I should not have responded the way that I did.

And for that I am sorry. I should not have treated the reporter that way. I am sorry Mr. Ben Jacobs. I want to apologize to the FOX News team and I am sorry to each of you for my actions.

That is not the person I am or the leader I will be for Montana. Rest assured — our work is just beginning — but it does begin with me taking responsibility for my own actions.”

On Wednesday, in front of a Fox News crew that was setting up for an interview, Jacobs confronted Gianforte about the new CBO report on the American Health Care Act. According to Fox News’ Alicia Acuna, “Gianforte grabbed Jacobs by the neck with both hands and slammed him into the ground behind him.”

Greg Gianforte just body slammed me and broke my glasses

While video cameras were not rolling, Jacobs’ audio of the confrontation is shocking:

By the time news of the incident broke, even though it was the day before the special election, Gianforte likely had already secured his victory. Almost 70 percent of votes were cast early in the race. Three Montana news publications withdrew their endorsements, and even House Speaker Paul Ryan condemned Gianforte’s actions. Though he stopped short of asking for Gianforte to step aside in the race, Rep. Ryan told reporters:

“There is no time where a physical altercation should occur with the press or just between human beings. So, that is wrong and it should not have happened.”

Jacobs called 911 and after a brief investigation, Gianforte was charged with misdemeanor assault. If convicted of the crime, Gianforte faces up to a $500 fine and/or up to six months in jail.

Oddly, one local news organization refused to cover the body-slamming incident. NBC affiliate KECI did not air the audio of the incident and refused to cooperate with NBC News in providing accounts of the assault. Laurel Staples, an anchor for KECI simply read a statement on air that said:

New York Magazine cited sources close to KECI’s news director, Julie Weindel, who told NBC News, “The person that tweeted [Jacobs] and was allegedly body slammed is a reporter for a politically biased publication.” Eventually, after Gianforte was charged with misdemeanor assault, KECI reported on the incident.

The climate surrounding the media has grown toxic. Yes, there is a distrust of the corporately owned media. Likewise, the right-wing outlets that simply make their own version of the truth are not helping matters. But, the attacks from elected (or soon-to-be) officials on the First Amendment are abhorrent.

When the President set a standard of blaming his failures on “fake news,” it is hardly shocking when a candidate took the step of chilling free speech with a physical assault on a reporter.