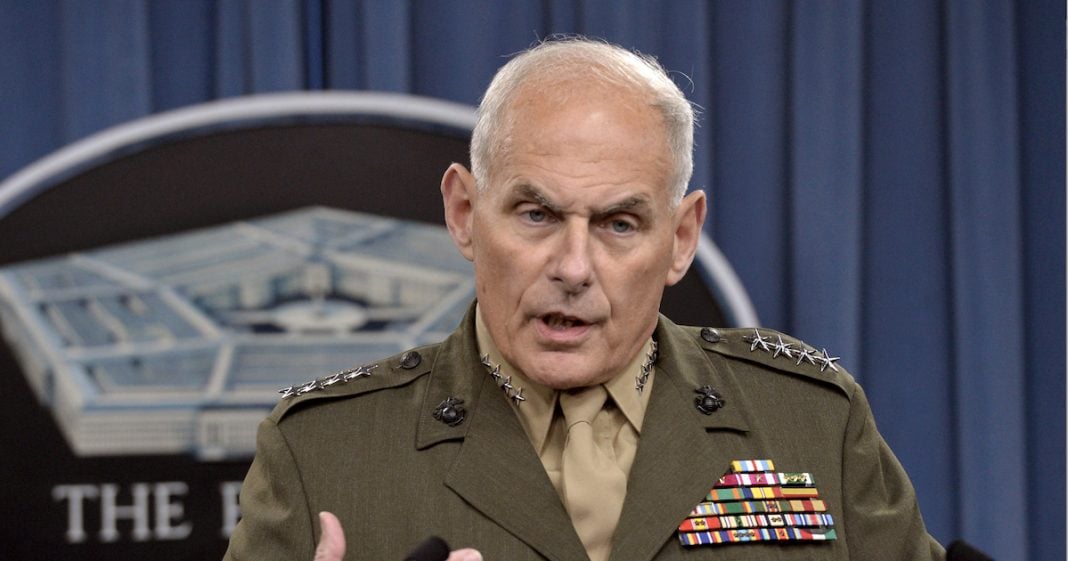 Selling the public on fear is a great way for the government to get Americans to sign off of things like the PATRIOT Act, a border wall, or even war. John Kelly, the head of the Department of Homeland Security, is hard at work attempting to justify the Trump administration’s assault on freedom.

“I was telling [Fox host] Steve [Doocy] on the way in here, if he knew what I knew about terrorism, he’d never leave the house in the morning.”

Kelly then referred to four terror attacks that occurred around the globe in the last week, including the bombing of an Ariana Grande concert in Manchester, England:

“It’s everywhere. It’s constant. It’s nonstop. The good news for us in America is we have amazing people protecting us every day. But it can happen here almost anytime.”

In addition to the Manchester attack that killed 22 and injured more than 100, ISIS has claimed responsibility for several recent attacks. On Wednesday, suicide bombers in Jakarta killed 3 police officers and injured 12 others. In Egypt Friday morning, gunmen shot at a bus full of Coptic Christians, killing at least 28. Meanwhile, the Philippine army is locked in a violent clash with the Islamic State.

While ISIS is a major global problem, the rhetoric from John Kelly has nothing to do with terrorism. President Trump is asking for $1.6 billion in the 2018 budget to go to “bricks and mortar for a wall,” according to Office of Management and Budget Director Mick Mulvaney.

Last month, Kelly went on CBS and detailed the link between the border wall and terrorism in the United States. “We have tremendous threats, whether it’s drugs, people, potential terrorists coming up from the south.”

However, as The New York Times reported in April, the risk on terrorists coming into the country via Mexico is minimal. In fact, according to NYT’s interview with George Washington University’s Seamus Hughes, we have seen instances of would-be terrorists crossing the border going south into Mexico:

Homegrown American jihadis have crossed the southern border to get out of the United States and catch a plane from Mexico, in an effort to avoid being detected on no-fly lists.

Even the Department of Homeland Security, which Kelly now heads, used to steadfastly maintain that the threat of terrorism from those crossing the Mexican border was false. In a 2014 statement, the DHS said:

“As horrible as Manchester was, my expectation is we’re going to see a lot more of that type of attack.”

Kelly says that the entire country is a potential target for terrorist activities and that there isn’t enough money to properly fund all localities. Instead, Kelly said that the aviation industry is the likely next target for terrorists. The DHS has banned large electronics from being used on flights from several foreign airports and the Trump administration has made two attempts at a so-called Muslim travel ban.

While Kelly has kept an eye on the Middle East and Mexico, he admits that he has a particularly worrisome blind spot: the United States. On CBS in April, he made the shocking claim that he was unsure on how to counter terrorists that were radicalized while in the US:

That is a scary thing to admit, considering attacks like the one in San Bernardino, at Orlando’s Pulse nightclub, and at Fort Hood were carried out by American-born terrorists. It is especially concerning when it is his job to stop such terrorist activity.

Terrorism is indeed a scary thought. Religious extremists, particularly those supporting the Islamic State do wish to do harm to Westerners. However, the loaded talk from Conservatives like John Kelly have nothing to do with actually stopping terrorism, it is simply an attempt to push the Trump agenda, of keeping foreigners out of the country. Whether they are from Mexico or from the Middle East, Trump simply does not want people immigrating to the United States and what better way to sell the American people than to paralyze them with fear.