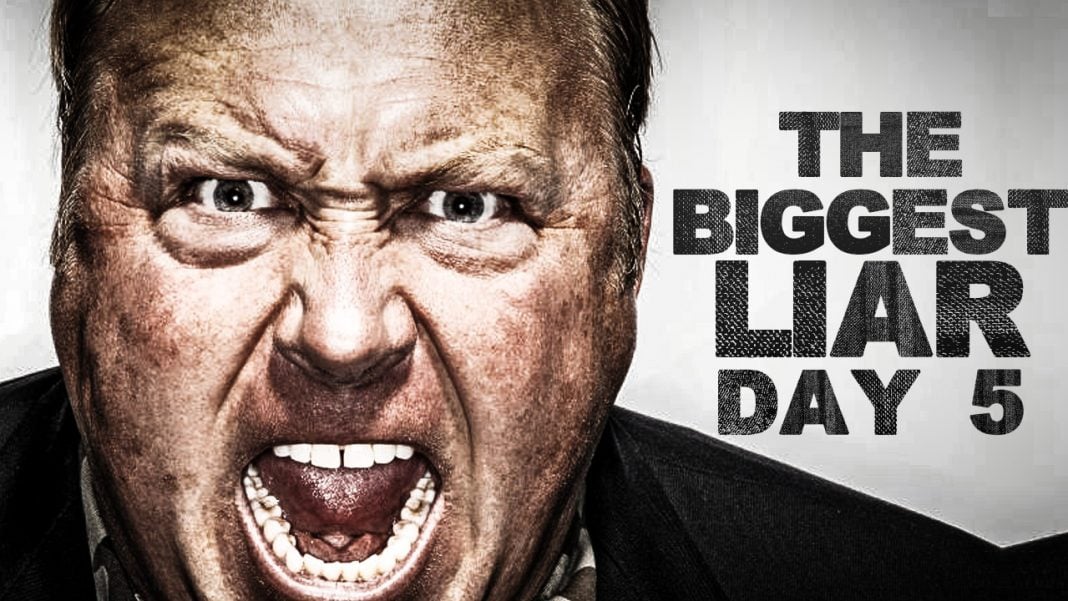 As we come to the end of Biggest Liar week on Ring of Fire, we’re looking at one of Alex Jones’s lies that almost got people killed.  That lie was the debunked Pizzagate story that claimed a sex trafficking ring was being run out of a DC pizza parlor with the help of high-ranking politicians and political strategists.  Jones actually apologized for pushing this story, a rare move for the conspiracy theorist. Ring of Fire’s Farron Cousins discusses this.

Farron: Today is our final day of Biggest Liar Week here on Ring of Fire. Our patrons on patreon.com voted, they selected Alex Jones. So, we’re going to round out Biggest Liar Week with one of Jones’ most recent lies that he adamantly pushed upon the American public, and that lie is that Pizzagate is real. Take a look at how many times Alex Jones told us that Pizzagate was real.

Jones: You want us to cover Pizzagate? We have covered it, we are covering it and all I know is, God help us, we’re in the hands of pure evil.

I love how the fake news is saying we’re fake news, and they’re specifically crapping themselves over Pizzagate, and their answer is to say it’s all fake. No, Wikileaks released this. This is in …

… leaked all the Pizzagate stuff as a checkmate, sort of them using this against our government. They’ve recruited pedophiles in the government.

Farron: For anybody who doesn’t quite know what Pizzagate is let me put it in a nutshell here. A DC pizzeria, Comet Ping Pong, was accused according to these documents released by Wikileaks and pushed, published by Breitbart and Alex Jones, that they were somehow running a child sex trafficking ring. High ranking officials within the Clinton campaign were involved in this somehow according to the conspiracy. They would go in, use coded language to order basically children for sex.

That is what Pizzagate was alleged to be. Again, published originally by Breitbart and pushed extensively by Alex Jones. This is one of the few lies that Alex Jones later had to come out and apologize for because it was incorrect on every single level. Jones issued a public apology saying that he’s sorry to the pizzeria, he’s sorry to the employees there, he’s sorry to anyone whose name he possibly defamed while spreading this nonsense conspiracy theory.

There’s a reason why Jones had to come out and apologize for this, that’s because out of all the lies he has pushed this one almost had a body count. A man, an unhinged individual who was persuaded by these conspiracy theories, decided to go to this pizzeria and shoot it up. Luckily nobody was injured during this shooting spree, but it could have just as easily gone the other way. He could have shot and killed everyone in that pizzeria.

A few days after the incident the shooter actually told police that, “Yes, I listen to Alex Jones.” So yes, this incident in this pizza place, this shooter, that is the responsibility of Alex Jones. His pushing of this conspiracy theory led this man to do that according to the man himself. That is why even though it took several weeks after that incident Jones finally came out and apologized for it.

This shows you the kind of real world consequences that the lies of people like Alex Jones have on our country. It’s one thing to go out there and push something, saying, “There’s chemicals in the water that turn people gay, the government’s doing that.” “The government’s making a weather weapon.” Those are rude, disgusting, discriminating talking points in many cases, but there’s no real entity for his listeners to hate, other than the federal government.

With Pizzagate he gave them the name of a company, he named names of employees and he told his listeners where they could find it. So any unhinged wannabe vigilante who thought he was going to go breakup a child sex ring and be a hero can go and shoot the place up.

This one was so different from some of the other conspiracy theories he’s pushed and that is why we decided to end this week on that note, talking about this particular Alex Jones lie that almost got people killed.

We want to thank everyone who participated in Biggest Liar Week, everybody who went to our Patreon page and voted. We will be doing more of these on different topics as the months, weeks go forward. If you want to take part in the next one go to patreon.com/theringoffire. Sign up to become a patron. Have your voice heard, we will listen to you and we will continue to produce the videos that you want to see.