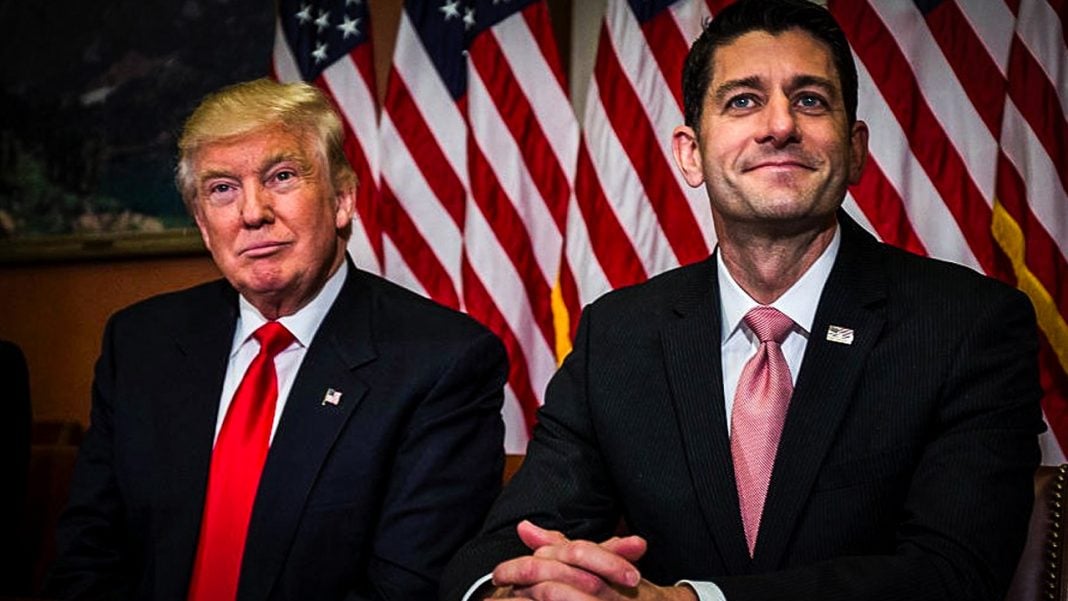 The Congressional Budget Office finally released their report of the new version of the American Healthcare Act, and according to that CBO score, 23 million Americans will lose their healthcare covering in the next few years. But that’s the story you already know about – what you likely haven’t heard is that 40 of the House Republicans who voted for this legislation own healthcare stocks and received a combined $2 million in personal profits after they voted for this disastrous piece of legislation. Ring of Fire’s Farron Cousins discusses this.

Yesterday the Congressional Budget Office released their score for the American Health Care Act, or Trumpcare, or Ryancare, or whatever you want to call it. Basically, it’s the disastrous healthcare plan put forth by Republicans in Washington, D.C. According to this CBO score, we could be looking at as many as 23 million Americans losing their healthcare coverage in the coming years, which is only a drop from the 24 million that were projected to lose their health insurance under the original draft of this legislation, so one million more people get to keep their health insurance. The CBO also pointed out that if we had never enacted the Affordable Care Act, Obamacare, if we had just let the insurance market take over and do whatever, left all those people uninsured, we would still have fewer uninsured people in the United States than we will if the Republican healthcare bill passes, which means, had we just let everything go to hell, it would still be better than this disaster of a piece of legislation that the Republicans have drafted.

Now, that’s the story that a lot of outlets have already reported on. We know the CBO score. We could’ve predicted it. We knew it was going to be horrible. Here’s a story that I’ve only seen so far in the Daily Beast. It was a Daily Beast original investigative piece where they talked about the fact that if you’re wondering why Republicans are so willing to support this piece of legislation that their constituents and the American public clearly hate, and it’s going to strip them of their health insurance, then you need to look at their financial disclosure forms. According to this Daily Beast investigation, 40 of the Republicans who voted in favor of the American Health Care Act own anywhere between 23 million and 39 million in stocks in pharmaceutical and medical device companies and other healthcare industries, anywhere between 23 and 39 million for these 49 people total, and they recently made profits, combined, between two million and six million.

If you’re wondering how these Republican politicians who represent people who hate them for stripping them of their healthcare coverage, just understand the fact that the Republicans don’t care because they’re making a huge profit off of it. Even if it raises those politicians’ healthcare premiums, I’m sure that with the combined average of $50,000 a year from these stocks, I think they can afford the increases. I think they can afford it if their health insurance goes up because they have a preexisting condition. The American public in general doesn’t have that benefit. We don’t own stocks in pharmaceutical companies. We’re not making tens of thousands of dollars every year just from those stocks, so we can’t afford these increases in health insurance prices. That’s why these people are going to lose their healthcare coverage.

Again, you look at that as the average, 50,000 on average for those 40 members every year from these stocks. These are people, some of them have invested $500,000 into stocks of companies like Merck and Pfizer and Johnson & Johnson and Bristol-Myers Squibb, and they’re willing to sell you and your health down the river for about 50 grand a year. That is how little your life is worth to these people in Washington, because had those 40 Republicans not voted in favor of this, we wouldn’t be talking about it today. We wouldn’t have a CBO score because there’d be no legislation. They sold you out for a couple thousand dollars, tens of thousands, some of them maybe even more than that.

That’s what’s important to them. That’s what this is all about. They’re trying to give back to the companies in which they own stock, and those companies, the ones I mentioned earlier, the medical device manufacturers, the pharmaceutical giants, they’re going to benefit from this legislation because their American Health Care Act actually takes away a lot of taxes and fees and penalties that the industry currently pays to the federal government. They save money; the federal government loses money; Republican politicians make money; and you lose your healthcare insurance. That is what the American Health Care Act, put forward by these Republicans in the House of Representatives, will do to this country.