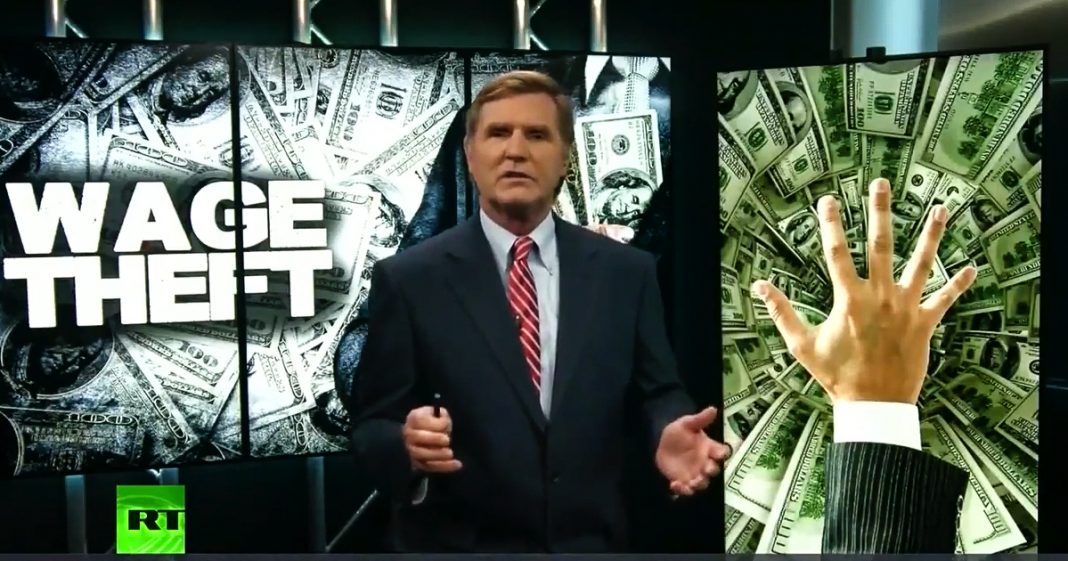 Mike Papantonio discusses the various ways corporations engage in wage theft and speaks with attorney, Brandon Bogle, about how workers can fight back against these practices.

Papantonio: Last week, President Trump signed a bill that repealed an Obama-era regulation that forced government contractors to comply with labor laws, specifically laws related to worker safety and worker pay. If a company didn’t comply with these regulations, they would lose their federal contracts. Now that this regulation is gone, federal contractors have been given a green light to engage in questionable labor practices, and the door has been opened for contractors to engage in legal forms of wage theft. Stealing!
The phrase wage theft refers to any action taken by a company that denies a worker the pay that they are entitled to. There are many different ways that these corporate schemes are carried out. The first is to simply deny workers overtime pay for any hours that are worked over the standard 40 per week. Some businesses require employees to work far beyond the typical 40-hour work week, but they don’t pay employees overtime pay, or they simply don’t pay them for the extra hours at all. This is typical of salaried employees who aren’t paid by the hour.

Another typical scam that we see businesses pull off is to re-classify employees as independent contractors. When this happens, the companies simply pay their workers a set amount, regardless of how many hours that the employee actually works. If the worker puts in more hours than they’ve been paid for, they never see the rest of the money that they’ve earned, and the corporation gets to pocket the difference.

There are also instances, particularly with the garment industry, where workers only get paid for the amount of clothing that they fold, often a few pennies per item, causing their real hourly pay rate to hover around three dollars. And here’s how bad the problem is: a three-year long study by the Department of Labor found that 85% of the garment industry in Southern California was found to be stealing wages from their employees. These were companies like TJ MAXX, ROSS, and FOREVER 21. More than 660 investigations found that more than 5,000 of these workers had lost out on over eight million dollars because of wage theft.

Across the country, the Labor Department’s Wage and Hour division managed to recover about $700,000 dollars every single day in 2015 from employers who were illegally withholding wages from their employees. The victims of wage theft are typically in low-wage industries like textiles, construction, and manufacturing, with foreign workers falling prey to predatory businesses because they are the least likely to speak up, and the least likely to be aware of labor laws.

Wage theft isn’t only limited to low-wage industries or foreign workers, and I’m joined now by attorney Brandon Bogle who handles wage and hour cases for plaintiffs who have been denied their earned income. Brandon, tell us a little bit about the bill that Donald Trump signed and how this is going to affect wages for federal contract workers?

Bogle: Yes, under the Obama administration there was a rule implemented which basically required companies who were bidding for government contract work, which uses taxpayer funds, to undergo a background check, to disclose bad corporate acts like the wage theft, other unsafe work conditions, civil rights violations, and if the government found there was such pervasive violations that it occurred then they could deny them the actual contracts. The actual background checks that were required here were fairly basic and the same background checks that general people like ourselves undergo to get a job anywhere. Now, what President Trump has implemented here today and recently has actually changed that, and now they don’t have to undergo the background checks and they cannot be denied the actual contracts for committing these bad acts.

Papantonio: Okay, let’s not dress this up. Let’s call it what it is. Trump signed a bill that now allows … Well, it’s already been going on. Corporations steal from employees. It’s theft, it’s just pure theft, it’s simply stealing from employees, and it’s not in any one area but there are some areas where the biggest violations are taken place. What are those areas that we typically see this?

Bogle: Yeah, you’re right. The violations are rampant, but unfortunately we see it predominately in areas where people are earning a low wage to begin with. We’re talking about hotel workers, construction workers, people that work at restaurants. It’s those kind of people who are really preyed on. You mentioned the garment industry, that’s another area where pervasive violations have been found. But unfortunately it runs rampant among companies that already pay low wages to begin with.

Papantonio: Okay, so you’ve got workers, you’ve got a labor market out there that’s already under pressure. I mean, people are trying to get jobs, they’re willing to take jobs for just about any kind of setting. One story that is particularly troublesome is where they’re paid three pennies for every garment that they fold and when you really do the numbers, you’re talking about $3 an hour or something like that. But I think the troublesome thing about this story is that workers are slow to respond. I mean, you almost have to shake them and say, ‘Listen, you don’t understand. Your employer just stole $100 from you this week.’ What has been your experience when it comes to dealing with clients on this issue? Why are they so slow to respond? They don’t know the law? Are they just afraid of the issue?

Bogle: I think that part of it is they don’t know the law. They don’t want to lose their job. They’re concerned about retaliation by their employer and other people just want to assume the best of their employer and want to assume also that the government is going to help them out, and we know that that’s just not true. People have to take affirmative action to protect themselves and to really take action to understand the law or to engage somebody that’s an expert in this area.

Papantonio: Tell us how businesses typically … What are some of the scams? A lot of times you’ll hear people talk about this and they won’t even understand how the scam works. They know something’s not right, and they know that they have the sense that their employer is stealing from them in a big way, but they don’t understand the scams. How do they pull off these scams? What are they?

Bogle: Yeah, you know we see it in a lot of different areas. What you typically see, though, are requiring employees to work off the clock, whether it be training sessions or time to boot up their computer that they’re not paid for, improperly classifying them as independent contractors which allows them to pay much lower amounts to people, not paying them overtime for work that they’ve clearly performed, not paying the federal minimum wage or the state minimum wage which I should note is often higher than the federal minimum wage. Or, what really is terrible is people work the 40 or 50 or 60 hours a week and what the companies will go back and do, especially if they get into the overtime, they’ll just cut those hours off of their check, and the employee doesn’t even know those hours have been cut. We see it in all of those areas, and unfortunately again, it’s a very pervasive practice among companies in this country.

Papantonio: Well, we’ve seen documents actually where you’ve seen a corporation figuring out what does this mean for the corporation. How much money can a corporation save if they cut $20 here, $50 there, and they’ve got 1000 employees? They do it every week. The numbers are staggering. We’re talking about numbers reaching into the hundreds and hundreds of millions of dollars that corporations are able to save simply by doing this, and the awful thing about it is, it’s such little small tranches. It might be $10 here, $5 there, but you take this over scale. Say for example, Walmart or one of the big box stores, when they do that the numbers are staggering as far as what they steal from the employee and put in their pocket. How widespread is this problem, though? I mean, if you were to characterize it, how widespread is it really?

Bogle: It is very widespread. I think it’s safe to say that a majority of corporations out there engage in some form of wage theft, and they do it exactly the way you stated. For these employees, it’s a death by 1000 cuts. They take a little bit here, a little bit there, and it adds up to billions and billions of dollars. The Department of Labor, just since 2009, has uncovered violations which account for billions of dollars, and again, the Department of Labor is only scratching the surface. That is only a small amount of the actual violations that occur out there, and some of these violations again, they take a few dollars here, a few dollars there, but when you’re dealing with individuals already being paid very low wages and often times making the federal minimum wages, those dollars make a difference between them being above or below the poverty line. Or, having the ability just to feed their children. This is a very big issue.

Papantonio: Okay, there’s some good news here. There’s some good news here. People like yourself that have a specialty in this, when I talk to folks, the attorneys that handle these kinds of cases, they say they’re very winnable. I mean, they’re going to win most of the time when these cases are brought. If somebody will say, ‘Okay, I’ve had enough’ and they’ll see an attorney about this, most of the time the attorney will win this case. Did I get that right or is that an overstatement?

Bogle: You’re right. Not only because this law is an area that is often times more favorable to the employee, but it’s also an area where the violations by the corporations are just so flagrant. When you dig into the documents themselves, the violations are obvious, and they cover most if not all of the people employed in the company. The violations themselves are so obvious that we are able to win a vast majority of these cases if people are just willing to stand up against their employer and do so, which is very important to do to stop the violations from continuing to occur.

Papantonio: Brandon, about a minute, one thing that I’ve seen is I’ve read about these cases and I’ve watched the work that people like you do. You’re always talking about the decline in labor union protections is one big reason this is happening. In about 30 seconds, give me your take on that would you?

Bogle: Yeah. The decline in the labor unions is a big issue for employees in this country. It’s a big problem for them and especially now when you’re entering an era with this administration that is not going to protect employees, this is a time where labor unions could be so important and their decline has been catastrophic for employees across this country, and we can only do our very best to try to change that because it’s necessary to have those kind of basic protections for employees.

Papantonio: I’m glad you’re out there. If people here about, if they’re watching this segment, if you think this is happening, see an attorney who specializes in this area. These cases are very winnable.