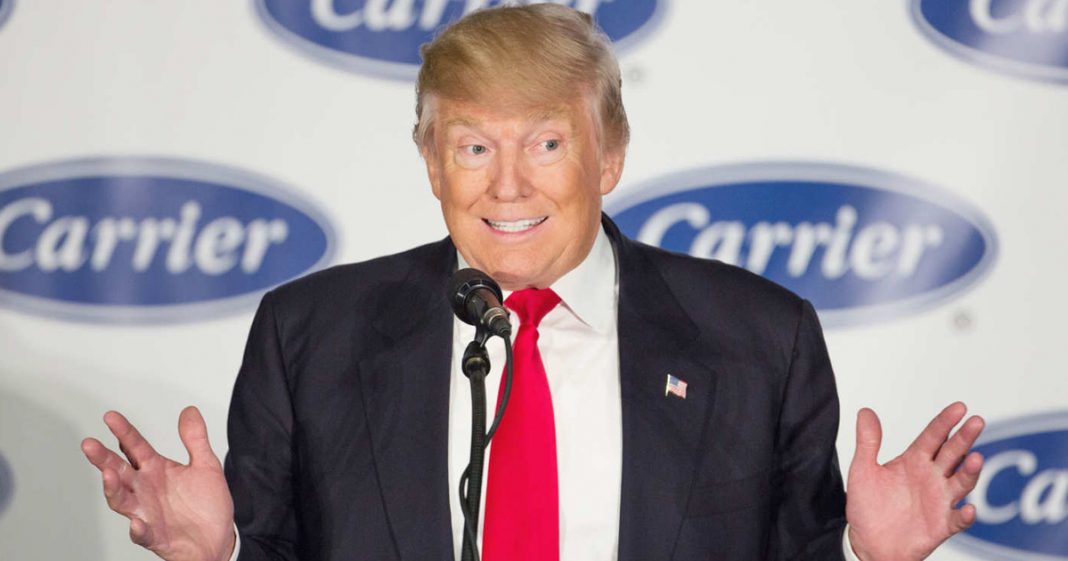 Remember how, during his campaign, Trump threatened the Carrier Corporation with a 35% tariff on its products if it outsourced its manufacturing to Mexico? Then, it turned out that the parent company, United Technologies had actually been offered a bribe in the form of a $7 million tax cut which had been negotiated by then-governor Mike Pence.

Now, despite Trump’s “promises” to save U.S. jobs, more than 600 Carrier workers in Indianapolis are being kicked to the curb as the employer they served loyally and diligently for years moves those jobs to a facility in Monterrey, Mexico. It’s less than half than the 1400 jobs Carrier had originally planned to outsource – but it is still a betrayal. Furthermore, it has exposed Trump for the lying sac à merde that he is.

During last year’s campaign, a video taken when Carrier management announced the coming layoffs went viral. Ever the opportunist, Trump jumped on the situation, attacking Hillary Clinton over her support for NAFTA and other “free trade” deals, and swore to save all the high-paying manufacturing jobs in Indianapolis. Those promises played a large part in his victory last November.

Three weeks later, he triumphantly marched into Carrier’s Indianapolis plant and proclaimed that he had made a deal to save 1,000 jobs. At the time, Pence said,

“Donald Trump did just what he said he would do. He picked up the phone [and] talked about our plans, our plans to make America more competitive, to reduce taxes, to roll back regulations, to put American jobs and American workers first again. He made the case for America. And Carrier decided to bet on a brighter future for the American people.”

Chuck Jones, who is president of Local 1999 of the United Steelworkers in Indianapolis, was not fooled. He knew back then that at least 550 of those jobs would be going south of the border. He also knew that members of his union, understandably frightened at the prospect of losing their jobs, had been completely taken in by this Father of Lies. He said,

“People went crazy for him. They thought, because of Trump, I’m going to be able to provide for my family…[but] that’s not what the numbers say.”

Then, when Jones called out him on his lies in the Washington Post, Trump responded with one of his infamous “tweets”:

“Chuck Jones, who is President of United Steelworkers 1999, has done a terrible job representing workers. No wonder companies flee country!”

“If United Steelworkers 1999 was any good, they would have kept those jobs in Indiana. Spend more time working-less time talking. Reduce dues.”

Too late, the workers who were played for chumps by con-man Trump are realizing they were sold a proverbial bill of goods. As for the Hoosier State’s tax deal with Carrier,  Jones notes,

“The taxpayers got hoaxed out of $7 million to move more than 1,250 Carrier jobs out of this country. The whole thing was a scam.”