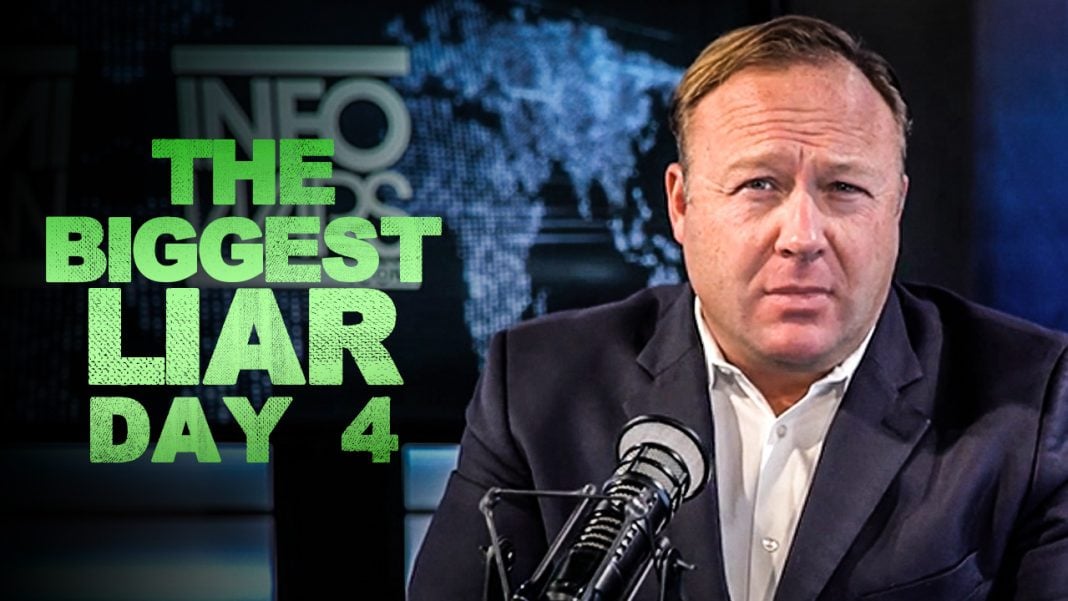 Alex Jones believes that government “weather weapons”, and not climate change, are behind some of the worst natural disasters in the United States.  By downplaying the role of climate change and promoting these conspiracy theories, he’s doing severe harm to our ability to prepare for, and work to prevent, climate-related disasters. Ring of Fire’s Farron Cousins discusses this.

It’s day four of Biggest Liar Week here on Ring of Fire. Our patrons over on patron.com voted, Alex Jones was the winner. So, here is day four, one of the biggest lies that we have seen from Alex Jones. This particular lie is one that Jones has repeated many times. He often repeats this anytime there’s any kind of natural disaster, any kind of weather disaster in the United States. That is, that the U.S. government is developing weather weapons to manipulate the weather here in the United States.

There’s various reasons Jones gives why they do this. One, population control. You send out a flood with your government weather weapon, you kill a few dozen people, you help reduce the population by a little bit. Another is to keep the farmland in check. We dry that up, cause these droughts with these government made weather weapons, we reduce the food supply. We send farms out of their way of life, according to Alex Jones. That’s somehow is something the government is wanting to do. Furthermore, you’ve got Bill Gates involved in this, according to Alex Jones.

NASA, they’re spending billions of dollars every year on weather modification. Even, according to Jones, they’re allowed to kill us in the name of weather modification. Here’s the thing, this kind of lie is particularly dangerous for the American Public. Because, it under minds the role that climate change and the activities of human beings are playing on our climate. By saying that these droughts and floods and tornadoes and hurricanes are caused by the government manipulating weather you completely take out the role that we’re playing by spewing carbon into the atmosphere at an unprecedented rate, by eroding our shorelines, by dumping chemicals in rivers. You’re reducing the importance of cleaning up our own mess by instead blaming someone else.

It’s what a child would do and Jones clearly has the mindset and the mentality of a child. He wants to blame anyone but himself and his listeners. He’s playing on his listeners fears. Jones may or may not believe these things according to his own lawyer he absolutely does not but he knows that he has attracted an audience of weak minded individuals who will believe these things. He puts clips up on screen, you know websites that look, you know, not something you or I would go to but I’m sure his followers see it, “Well, it’s online. It’s there. It’s true.” That is the damage that Alex Jones causes.

Rather than attacking the real issue like climate change, he’s saying that the government is manipulating weather so don’t worry about how much you destroy the environment because the government’s out there making these weather storms, making these natural disasters, making these catastrophes that are killing people. It’s not you, it’s not that gas guzzling SUV you drive, it’s not the toxic chemicals that your companies are dumping into the air and water. You know, killing farm land. It’s none of that. According to Alex Jones, the answer is always, when there’s someone to blame, it’s the federal government.