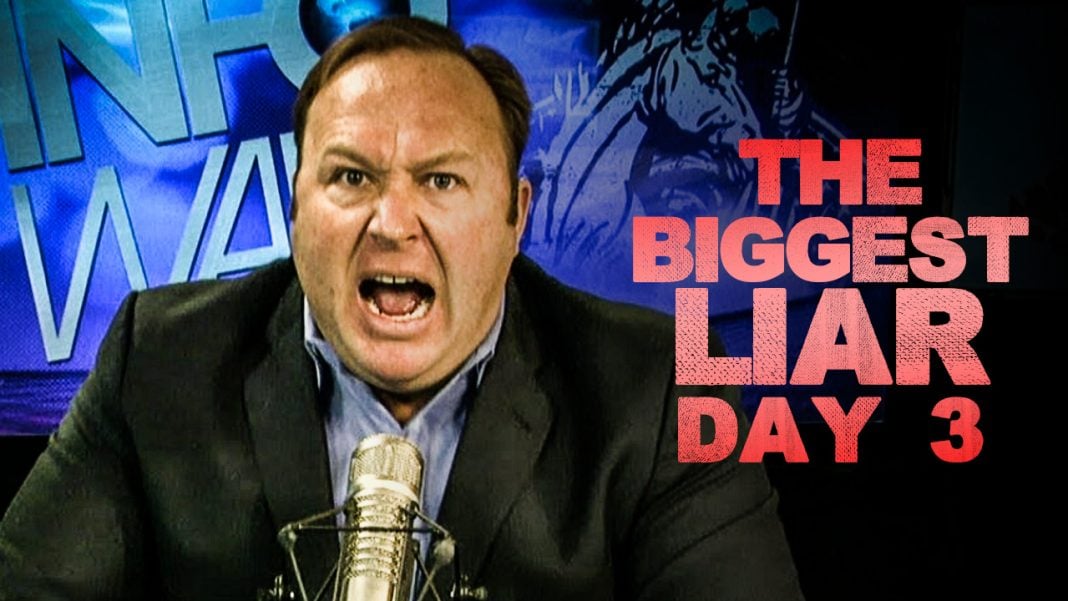 Not long after the attack an Arianda Grande concert in Manchester, Alex Jones made a video where he blamed so-called “liberal trendies” for the attack, saying that their constant cries for open borders caused this disaster. Ring of Fire’s Farron Cousins discusses this.

Cousins: It’s day three of Biggest Liar Week here at Ring of Fire. Our patrons on Patreon.com voted and they selected Alex Jones. So, here is lie number three of Alex Jones’ biggest lies and this lie actually happened to come out this week. In response to the terrorist attacks in Manchester at an Ariana Grande concert, Alex Jones immediately hopped in front of a camera and delivered this message to his viewers.

Jones: In less than 24 hours after President Trump finishes that speech, a big bomb goes off at a pop star’s rock concert, bombing a bunch of liberal trendies. The same people, God love them, on average who are promoting open borders, bringing Islamists in.

Cousins: Liberal trendies. You know, the victims of this attack, the people who were killed, they’re to blame, according to Alex Jones. Now, that might not necessarily be a lie, per se, but it is a disgusting comment that warrants some dissection here. Now, he did lie when he say that all these people were … Or some of them were liberal trendies. I don’t even think that’s a real thing. We’re not talking about the United States here. This is Manchester. A whole different set of policies, political parties, political beliefs. You can’t lump everybody into some kind of category because you don’t like them.

Second of all, some of the victims were as young as eight years old and they are dead. I don’t think those eight-year-old children were making policy. I don’t think they were out there protesting to have open borders. Furthermore, moving on in the lie, open borders is not what caused this terrorist attack. Psychopaths, who have no regard for human life, are what caused this attack. Those are the people who carried it out.

Donald Trump classified them as evil losers, but that really isn’t the case. Saying somebody is a loser or a winner, all you’re doing is antagonizing them. That doesn’t get to the root of the problem. These people have psychopathic tendencies, they believe in something that’s not real, and they’re willing to kill for it. They have bastardized their own religion to the point that they believe things that aren’t true and that’s why they’re doing this. But to people like Donald Trump, to people like Alex Jones, it doesn’t matter. Anytime you can tie it back to some kind of alleged liberal policy, they’re going to do that.

We have seen Republicans plenty of times in the past, at any given opportunity, go into victim blame mode. Well, this is your fault. Recently, we heard someone on Fox News say that the victims on 9/11, the people in the plane crash, they should have done more to fight back. Why’d they just let this happen? This is what Republicans do and Alex Jones is pulling it off beautifully. Because he’s convincing his listeners that liberal policies will get you killed. That’s what’s at the heart of this and that’s why this is one of the biggest lies we have heard from Jones in recent history.

This lie also happened to come the same week that Alex Jones’ organization, Infowars, received White House press credentials. Now, this liar and his conspiracy theory laden organization is in there, in the White House press pool, spreading their propaganda, taking the words of the President, twisting those around, and sending them out there to their hate-filled, confused viewers. That’s what Jones did with this Ariana Grande concert terrorist attack and it’s what he’s going to do as many times as he can, any time something like this happens. Blame it on the liberals, blame it on the victims, and ignore the fact that we’re fighting a war against psychopaths that clearly we don’t know how to win at this moment.