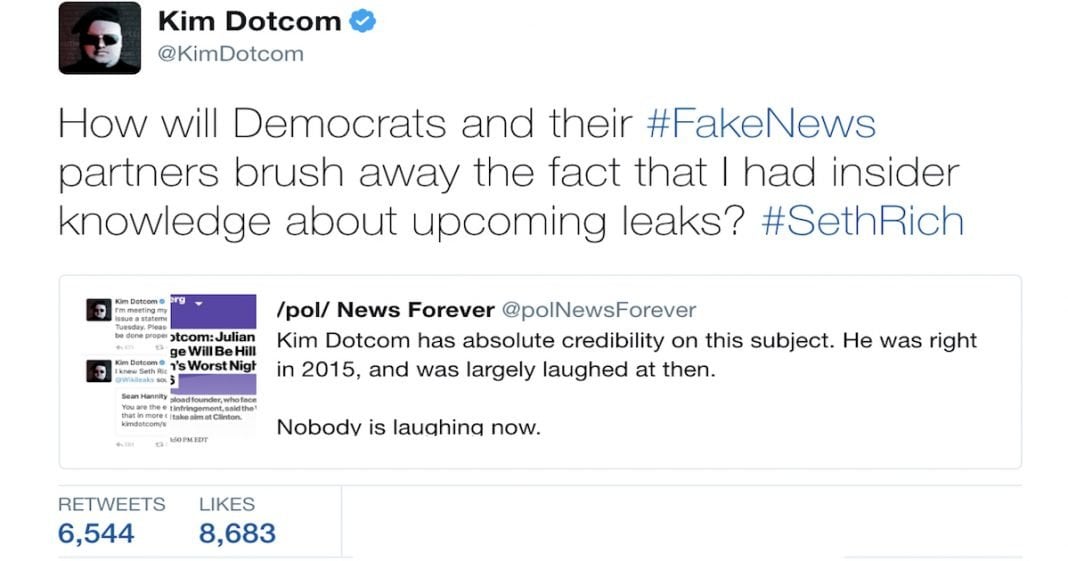 The Washington Post calls it a conspiracy theory. Right wing outlets think it is a massive cover-up. WikiLeaks offers just enough in the way of suspicion to sell intrigue. Fake news, hackers, and a murdered DNC staffer have all added up to an incredibly mysterious story regarding Seth Rich and it seems that both sides are claiming to have the absolute truth.

Seth Rich was the Voter Expansion Data Director for the Democratic National Committee ahead of the November 2016 election. Rich was working on voter rights issues and was tasked with making it easier for voters to find their polling locations. However, he was gunned down in the early hours of July 10th, 2016, just a block from his Washington, DC home.

Using gunfire location technology called SureShot, police were alerted to shots fired in the Bloomingdale are of DC at 4:19am. Rich was found with two gunshots to his back. Although he was conscious and breathing when police arrived, he soon died in the hospital.

The band on his watch was partially torn, but nothing else was taken. He still had his cellphone and the contents of his wallet were intact. Though, robberies in the area had seen an increase. So, police said that perhaps Rich was the victim of a botched robbery, but offered few other details.

In the absence of publicly available evidence, the internet buzzed with salacious stories about Rich being murdered in some sort of DNC cover-up. Right-wing message boards and Twitter threads theorized that Rich was headed, in the early morning hours, to meet with the FBI to expose corruption within the Democratic Party.

Adding fuel to the speculation, Julian Assange, the editor of WikiLeaks, hinted in an interview that Seth Rich may have been a source for the publication and WikiLeaks even added a $20,000 reward for information in the Rich case. However, WikiLeaks stopped short of confirming Rich as a source.

Our original and only statement on the murder of US Democratic National Committee staffer Seth Rich. #DNCLeak pic.twitter.com/Qsjfyb696p

Rich’s parents were quick to chastise those that were spreading the speculative information. Through their family spokesman, Brad Bauman, the Rich family said:

“Some are attempting to politicize this horrible tragedy, and in their attempts to do so are actually causing more harm than good and impeding on the ability for law enforcement to properly do their job. For the sake of finding Seth’s killer, and for the sake of giving the family the space they need at this terrible time, they are asking for the public to refrain from pushing unproven and harmful theories about Seth’s murder.”

However, Heavy has reported that Bauman has his own skin in the game. Shooting down DNC controversies is quite literally his career:

For their part, sources within the DNC’s own internal investigation of the WikiLeaks scandal told Newsweek that they found no evidence that Seth Rich was involved in the sophisticated hack. Instead, they turned to a familiar foe: “Every indication is this was a remote attack from a foreign government – the Russians.”

Still, rumors regarding the case have persisted, coming to a head on May 15th, 2017. FOX 5 DC cited private investigator Rod Wheeler in a report that said Seth Rich had contacted WikiLeaks before his murder. Wheeler, a paid source for Fox News, was hired by the Rich family, courtesy of a contribution and recommendation from billionaire conservative commentator Ed Butowsky.  He told reporters that he had sources at the FBI that linked Seth Rich to WikiLeaks.

The story exploded when Julian Assange retweeted the FOX 5 DC story, leading some to believe it was a confirmation of the story. 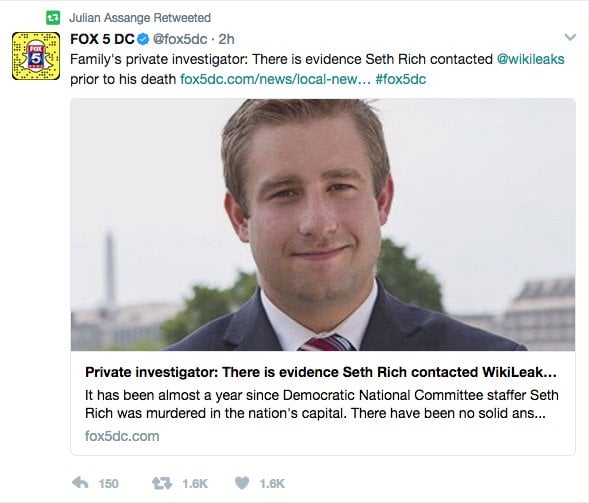 Though, within two days of breaking the story, FOX 5 DC issued a retraction, saying that Wheeler could not confirm that his information came from FBI sources. Wheeler said that his statement was a “miscommunication.”

Meanwhile, conservative pundits like Sean Hannity and Newt Gingrich have continued to push the story of Seth Rich. They believe that connecting Rich to the WikiLeaks release of the DNC emails will directly contradict the narrative that the Russian government hacked John Podesta’s email account. It would certainly absolve the Trump campaign of their alleged collusion with Russia in the matter.

Congress, investigate Seth Rich Murder! @JulianAssange made comments u need to listen to! If Seth was wiki source, no Trump/Russia collusion https://t.co/QPHZwypU34

On Monday, even more attention was brought to the case as controversial internet entrepreneur Kim Dotcom fanned the conspiracy flames.

If Congress includes #SethRich case into their Russia probe I’ll give written testimony with evidence that Seth Rich was @Wikileaks source.

Dotcom is a close friend of Assange and claims to have been connected to the leak of the DNC emails, along with Seth Rich. Along with those allegations, Dotcom has said that Rich maintained a pro-Bernie Sanders twitter account, @Pandas4Bernie. Many believe that this would provide enough of a motive for Rich to expose the DNC’s efforts to subvert the Sanders campaign in the Democratic primary. Dotcom is expected to release a full statement on Tuesday, after meeting with his legal team.

It must be pointed out that Dotcom is currently fighting efforts by the US Department of Justice to extradite him on charges of copyright infringement, stemming from his now-defunct file-sharing website, Megaupload.

Additionally, conservative news outlet WorldNetDaily has reported that police have never officially interviewed anyone from the bar where Seth Rich was last seen alive and that surveillance video from that night was never requested by law enforcement. WorldNetDaily is hardly an unbiased publication, but their report is gaining steam with those that believe a cover-up is afoot.

Of course, even Russia has also sought to capitalize on the situation. The Russian Embassy in the UK tweeted: “#WikiLeaks informer Seth Rich murdered in US but MSM was so busy accusing Russian hackers to take notice.”

#WikiLeaks informer Seth Rich murdered in US but ?? MSM was so busy accusing Russian hackers to take notice. pic.twitter.com/0XVezTyfHM

To say that the story is a mess is an understatement. The corporate left-leaning media has been quick to dismiss any story that suggests that Seth Rich was the victim of anything other than a failed robbery attempt. For the conservative media, Seth Rich was most certainly a pawn in the DNC email scandal, painting the Clinton campaign as murderous thugs and simultaneously clearing Trump of colluding with Russia to interfere in the election.

While the media is bizarrely trying the case out in the court of public opinion, along clearly defined battle lines, police have given very few public details in the investigation. This is a murder investigation, an ongoing one. Information and indeed misinformation is continuing to streamed out through the media, yet we are no closer to the truth today than we were in July of last year.

Still, clicks are building up on websites over the story. The corporate media on the left is eager to shoot down any new information that comes out as a fringe belief designed to distract from Donald Trump’s corruption. Their main source is a former DNC crisis consultant, far from an independent entity.

For the right-wing outlets, Rich’s murder is THE smoking gun, proving once and for all that the Democrats will stoop to any level to win. Though, they are hanging their hat on an unreliable Fox News contributor and vague statements from Assange and Dotcom.

In this newly pioneered world of shameless media, truth is a fleeting concept. What news you believe depends greatly on your political persuasion. Whether it is a Presidential decree, a new scandal in the White House, or even the murder of a DNC staffer, we already know what the various sides of the press are going to report and we can count on the fact that very little of it will be a complete story.

People no longer want to challenge their beliefs, they simply click on the story that plays to their own bias, ignoring all other sources. Of course, the media is more than happy to serve up a distorted truth. For Seth Rich, we know very little. It is a messy and incomplete story. However, the media has filled in the blanks and the public is eating it up with a veracious appetite. The circumstances of a young man’s murder should not depend on your chosen political party. Unfortunately, that is what the world has become.