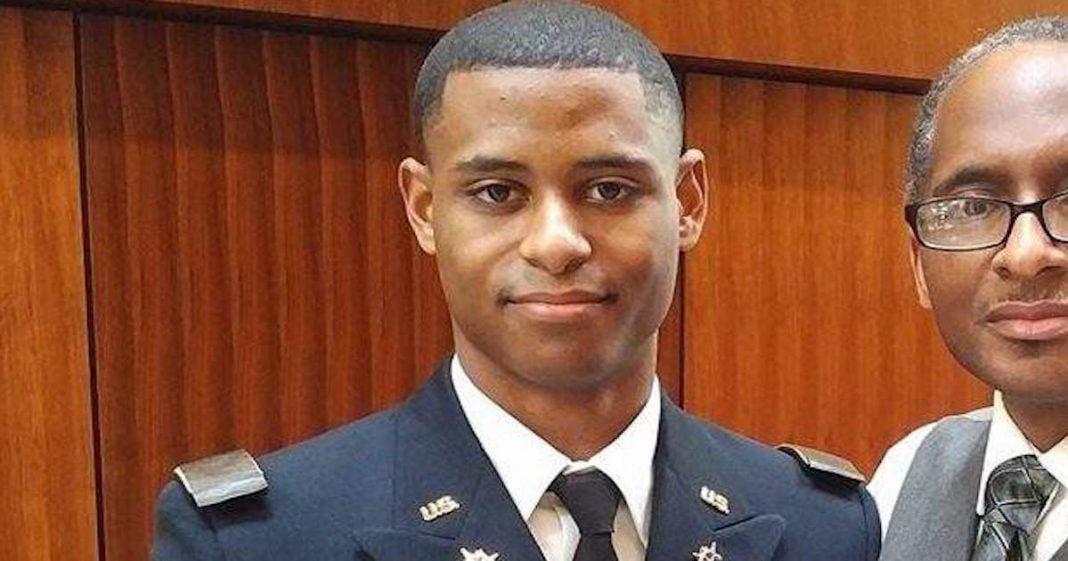 Richard Collins III, a black 23-year-old college student, was just commissioned as a second Lieutenant in the Army after completing an ROTC program and was set to graduate from Bowie State University this week. However, as Collins was waiting for an Uber outside of a dorm building at the University of Maryland along with two other students around 3am Saturday morning, he was stabbed once in the chest and subsequently died.

The suspect, Sean Urbanski, a white student at the University of Maryland, was extremely intoxicated when he approached the group on the sidewalk. According to the police report, Urbanski was “yelling, perhaps screaming,” before telling the group: “Step left, step left if you know what’s best for you.” Collins responded “no.” Using a folding knife, Urbanski then stabbed Collins once in the chest. Collins was transported to a nearby hospital, where he was pronounced dead. Urbanski was arrested near the scene and was charged with first-degree murder.

University Police initially did not believe that the attack was racially motivated, but on Sunday they were alerted to Urbanski’s social media activities. Ubranski belonged to a Facebook group entitled “Alt-Reich Nation,” which contained racist posts and memes. Now, police have asked for the FBI’s help in investigating whether or not the murder could be considered a hate crime. The page has recently been deleted.

“When I look at the information that’s contained on that website, suffice it to say that it’s despicable, it shows extreme bias against women, Latinos, persons of Jewish faith and especially African-Americans.”

The University of Maryland President Wallace D. Loh said in a statement:

“We must all do more to nurture a climate — on campus and beyond — where we stand against hate, we fight against hate crimes, and we reaffirm the values that define us a university and as a democracy. As we search for answers to this senseless crime, please continue to keep the family and friends of Lt. Collins, and the BSU community, in your thoughts and prayers. We all grieve together for a promising life ended far too early.”

The incident occurred as the Maryland campus has dealt with a rash of racist incidents. The Baltimore Sun reported on two such incidents:

“A noose was found in a fraternity house earlier this month, and posters promoting nationalism were found on campus earlier this year.”

The University of Maryland honored Collins with a moment of silence during their commencement ceremonies on Sunday. Bowie State plans on honoring Collins on Tuesday, during their graduation. Collins was to graduate from Bowie State with a degree in business administration.