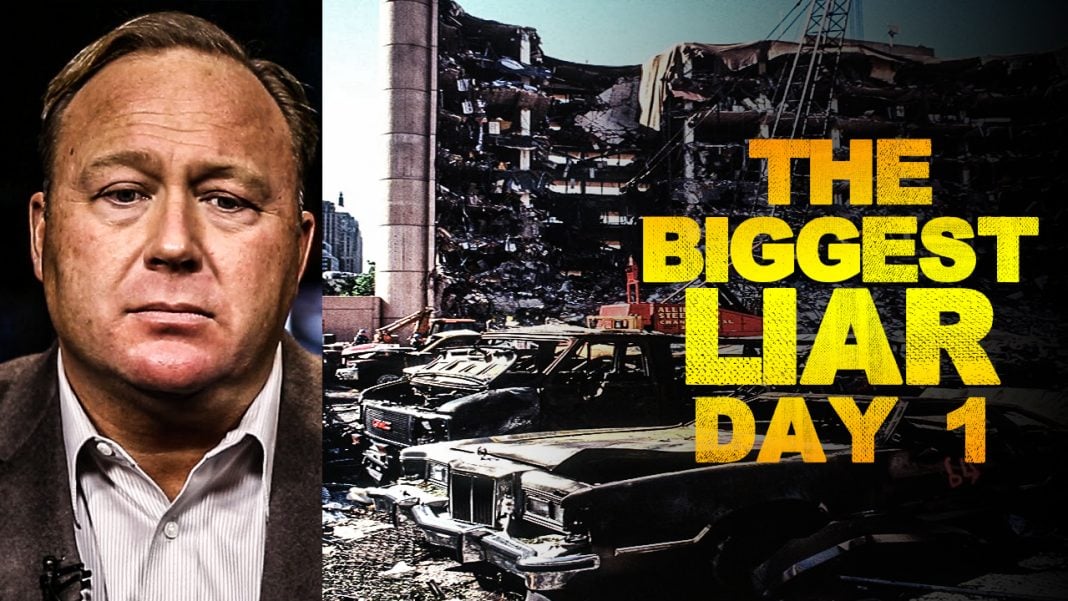 Our Patrons voted, and they’ve told us that Alex Jones is the biggest liar in the world of politics and media today.  So today, we’ll look at one of his oldest lies, and that is that the Oklahoma City bombings were actually carried out by the federal government to help put the brakes on the “states’ rights movement,” or so Jones says. Ring of Fire’s Farron Cousins discusses this.

Farron: It’s Biggest Liar Week here on Ring of Fire. Our patrons from patreon.com/TheRingofFire voted, and according to those votes, overwhelmingly, Alex Jones, host of Infowars is the biggest liar in politics and media today. So this week we’re going to go through, we’re going to count down five of Alex Jones’ biggest lies throughout his career. Today, we’re going to focus on number five, one of the very first, very big lies that Alex Jones told upon getting his own radio show, and that is that it was the federal government who was behind the 1995 Oklahoma City bombing. Take a look at a clip Alex Jones did recently where he explained this lie again.

Now, I’ve made three films on Oklahoma City. I’ve interviewed the police officers that survived, the families of police officers that we’re tortured to death by the Justice Department and killed. I have covered every facet of it. I’m not going to spend all day on this. I’m just going to tell you. If you’re a new listener and you don’t know what a self-inflicted wound is, what a false flag is, Hitler blew up, firebombed his own Reichstag, [inaudible 00:01:53] for being elected, February 27, 1933. Nuremberg didn’t even declassify it till about a decade ago, it was released, because the government didn’t even want you knowing how governments operate because they do it so much too.

Hitler firebombed the capital and then basically declared martial law. The rest is history. You know what happened. He launched false flags in Operation Himmler in Gleiwitz and other areas to blame Poland for attacking German military bases. You don’t think Hitler just invaded Poland and told Germans because he felt like it. He blew up his own military bases. That’s declassified. That came out after WWII. That’s what a false flag is. We’ve never had one so open and shut as Oklahoma City.

Farron: That clip was fairly recent, but this lie actually began shortly after Alex Jones launched his radio show in the late ’90s. He was telling people that the Oklahoma City bombing was basically a false flag operation carried out by the US government in order, according to Alex Jones, to squash the states’ right movement.

Now, obviously that’s not true. Timothy McVeigh bombed the Alfred P. Murrah Federal Building in Oklahoma City, and he did it because he hated the government. He was borderline, one of the ‘sovereign citizens,’ those far-right extremist groups that had been taught for a long time by right-wing talking heads that the federal government is bad, and that’s why he did this. It wasn’t because of some kind of states’ right movement that the government was trying to squash. This was about a man, a lunatic, trying to squash the federal government.

What this lie did was it basically undermined the deaths of 168 people. 168 people died when that building was bombed. Alex Jones is basically peeing on their graves is about the only way you can describe it when he said that this was a government operation. That is so disgusting to the families of the people who died and to the people who died, to their memory. We had more than 600 other people who were injured in this, people who live with the horrifying memories of that day forever.

What this lie really did, the reason this was so damaging is because this was one of the first times in American media where we had a national voice, somebody who up to that point had been considered relatively sane, this was before Jones was a huge conspiracy theorist, convincing or trying to convince millions of Americans that the government does things like this. This is how they operate. He poisoned and polluted the public discourse from that point forward in a way that right-wing talking heads could never have hoped for. It continues to this day. Like I said, the clip you just saw, that was fairly recent. That wasn’t from the late ’90s. This is a lie that Jones has been peddling for almost 20 years, and he’s going to continue doing this.

Again, this was one of the first times that we saw a mainstream outlet, such as Alex Jones, promote such a blatant and false and disgusting narrative about the government being behind an attack on US soil. Jones has not stopped. If anything, that particular lie is what set in motion what Alex Jones has become today, because, again, before this there wasn’t necessarily this stigma of crazy associated with Alex Jones. You had to build up to it. This lie that the federal government was behind the Oklahoma City Federal Building bombing is what put Alex Jones on the map. It set in motion a chain of events of lying, misdirecting the public, and creating these lavish conspiracy theories that poison the minds of American citizens. But that Oklahoma City bombing lie from Jones put all of this in motion, something that’s still in motion 20 years later.

Why did it do it? He did it to cover up the fact or protect the fact that Timothy McVeigh was a far right-wing extremist. Again, we have too many of those today. We have Cliven Bundy and his family. We have the sovereign citizen movement. We still have white supremacists out there who espouse this far right conspiracy theory ideology promoted by people like Alex Jones. Again, it all starts somewhere, and for Alex Jones it started with that Oklahoma City bombing lie all the way back in the late ’90s.