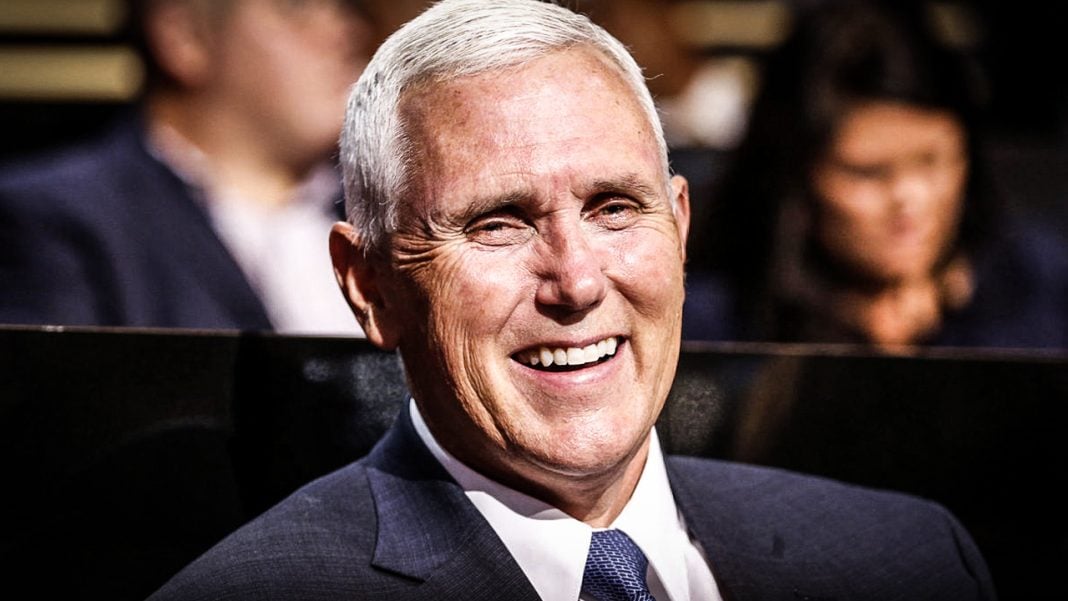 According to reports, Mike Pence has now launched a new Political Action Committee to raise money, a move that is typically only done by people seeking re-election. Since Pence isn’t the main candidate on a Trump-Pence ticket, this move is highly suspicious, and indicates that Pence might think he’ll be running the next election with Trump. Ring of Fire’s Farron Cousins discusses this.

We’ve been hearing a lot of talk about impeachment recently, mostly from democrats, but there are actually some republican politicians who are starting to jump on the impeachment train. After all, the evidence is becoming overwhelming that Donald Trump was involved in obstruction of justice. On top of that, polls show that the majority of Americans support impeaching Donald Trump. To be honest, there is one person in the Trump administration who is desperately hoping that that happens. That person is Mike Pence.

According to a report by CBS News, Mike Pence has already set up a political action committee. A move that is typically only done by people who are running for office or who plan to run for office. I know what some people are thinking. Maybe he’s just preparing for the 2020 re-election bid, but that’s not the case, because we already have those super PACS put in place for the make American great again campaign for Trump and Pence. Why would Pence need his own political action committee? What does he know? What does he suspect that maybe the rest of us don’t see?

While we can only speculate at this point, my opinion is Mike Pence understands that Donald Trump’s not going to be around in 2020. At least not eligible to run for presidency, basically. So he’s already gearing up this political action committee, according to a spokesperson, was set in motion a long time ago. Maybe that’s the base, but again, that doesn’t mean that Pence didn’t suspect Trump would get impeached or resign from office before the end of his first term. What this political action committee can do is pay for legal fees, which Mike Pence probably is going to get involved in all these scandals as well, so he’s going to need a good lawyer. It also pays for campaign travel. Again, something that when he’s running with Trump is actually covered by the other political action committees that are set up.

The only reason Mike Pence would need this current political action committee that he has created, is if he wants to run for president without Donald Trump. He wants to be the main guy on the ticket, or he is expecting to experience massive legal fees in the coming future and needs to raise money quickly so he can hire the best of the best attorneys to defend him from going to prison. Either one of those, to be honest, is a pretty stark reality for us to be faced with, because either the vice president thinks that he’s going to be running for president in 2020, which is not going to be good for this country. Mike Pence is a guy who could fly under the radar enough to possibly win. Or he understands that this entire administration is going down. He’s going down with them and so he’s got to start lawyering up as quickly as possible.

Personally, I hope it’s to pay for legal fees. I don’t want to see Mike Pence as our president. I don’t want to see Mike Pence run for president. He’s the kind of guy who is a classical conservative. Very hard core and extreme with the religious right. We’ve seen what happens when presidents align themselves with this religious movement and then run for president. They typically win. George W. Bush, Ronald Reagan did it. George H. W. Bush. John McCain didn’t. Mitt Romney didn’t. We saw what happened to them. In fact, I believe that that is why Mike Pence was chosen as Donald Trump’s running mate, to shore up that religious conservative base and to bring in somebody who had a little bit more experience than Donald Trump.

Either way, this political action committee story from CBS News, that Mike Pence has started here, is a much bigger story than people realize. Mike Pence senses something right around the corner. The only question we have to figure out is what is behind that corner.