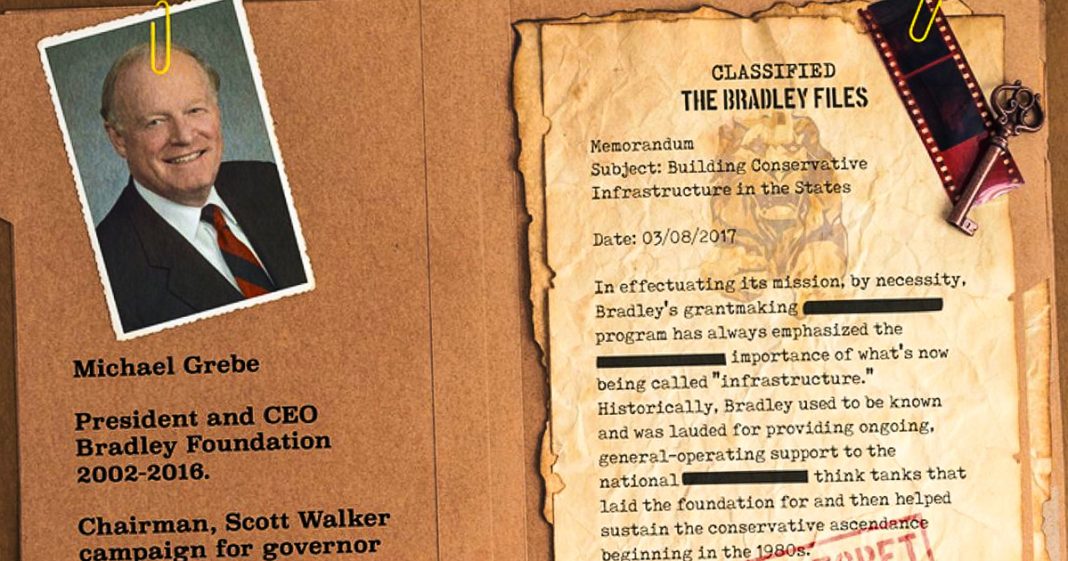 It’s no secret that the right has been trying to dismantle unions for decades, but recent documents uncovered by The Center for Media and Democracy have shown just how groups like The Bradley Foundation bankroll efforts to defund and eliminate unions. Mary Bottari, from PR Watch, joins Ring of Fire’s Sam Seder to discuss these secret documents.

Mary: The Milwaukee based Lynde and Harry Bradley Foundation is sort of a little known institution for people outside of the state. If you’ve heard of them at all, you’ve heard of them perhaps because they’re big backers of the school voucher movement, the school choice movement, that they were essential to getting the first school choice laws passed in Wisconsin many moons ago, and they also helped expand it to cover religious schools to that taxpayer money here in the state of Wisconsin can go to both private and religious schools in the form of vouchers.

We now have this very huge document dump and document trove of behind the scenes grant giving at the Bradley Foundation and we find out that not only were they essential to building a huge right wing infrastructure in the state of Wisconsin but they talk about it that way, they talk about it in terms of building an infrastructure and that infrastructure includes respected dynamic leadership, which we like to just call those ALEC politicians, folks that come out of the American Legislative Exchange Council with cookie cutter corporate backed bills.

They also fund think tanks, they fund investigating journalism which is really sort of more of attack dog media, they fund opposition research, that’s an interesting funding category. They fund legal components to backup all the activities that are going on and the list goes on and on. They have this infrastructure that they’ve built in Wisconsin of all these aspects and of course their big success story, and they talk about it that way, was the passage of Act 10, which is Scott Walker’s union busting bill which sparked mass protests in 2011 and 2012.

Sam: And we should say, the privatization schemes essentially coming out of Milwaukee in terms of those schools came under some scrutiny when Betsy DeVos got, if I’m not mistaken, when she was up for secretary of education because she had a hand in that as well didn’t she?

Mary: Yes, the documents show that Bradley Foundation worked hand in hand with the DeVos groups to fund certain key operatives and key lawyers in this whole school choice movement, including a fellow named Clint Bullock out of state of California who’s now a Supreme Court Justice there. But he led a lot of the litigation involving school choice from state to state. The Bradley Foundation is also interested in going after Blaine Amendments, which is a technical term for those constitutional provisions in states that prevent tax payer money to going to religious institutions. They’re still very active on this front of school choice, which in some sense you would expect.

It’s been a signature issue of theirs, they’ve been promoting it left, right and center, but what we found out by pulling back the curtain is that their agenda is really much, much broader than that. They want to “neutralize teacher’s unions” because they see them as an opposition element to this agenda. It’s very true that public school teachers are really alarmed when corporations come up with cash for kids schemes and want to privatize public education, so they have been pushing back on this privatization agenda.

But more than that, they’re not just going after teacher’s unions, they’re going after all sorts of unions. They call it, they want to “de-fund big labor” in order to de-fund a pillar of the left. Their real agenda behind the scenes is a much more aggressive agenda with partisan overtones, what is labor? Labor is the on the ground army of the Democratic party. If you de-fund labor what are you doing? You’re trying to cripple the Democratic party in state after state. One of the more interesting pieces of material that Bradley has created is a little video where they keep talking about, ‘We want to keep our Great Lakes blue and our states Red,’ and really these 56,000 documents opened a window into that agenda.

Sam: Who is Lynde and Harry Bradley? Who are these people?

Mary: Who are these people? Well most people don’t now them because they have passed on. They were inventors back in the early 1900’s, they started the Allen-Bradley company which was really instrumental in creating early electronics pieces like resistors that could be used in machines and factories across the United States. Their wealth of the Allen-Bradley corporation came from government contracts, they boomed after World War One, they boomed after World War Two because these electronic products were essential to the war effort. The brothers were quite conservative, Harry was a John Bircher in the early days, he made the John Birch spokes folks to come speak to his workers at the Allen-Bradley factory, so really a very conservative person.

They created a charitable institution in 1942, which was transformed into the Bradley Foundation in 1985 when the Allen-Bradley company was sold to Rockwell International and it went from being a tiny foundation to a giant, 290 million foundation. Today it’s almost 900 million dollar foundation and is one of the most important right wing funders in the nation that most people don’t know about.

Sam: Wow, and where do they get their money?

Sam: I see, so they just have an ongoing pile of money that continues to earn interest and whatnot?

Mary: Well they sold the company to Rockwell, it’s sort of a part of Rockwell International. Now the foundation is separate and independent and it’s a 900 million dollar institution.

Sam: Wow. They are expanding both their presence across nationally. Where … I know you can’t tell us, but I have to ask, where did these documents come from?

Mary: Well it’s a big mystery where these documents came from. The Milwaukee Journal Sentinel wrote a whole big piece about it, but it came to our attention because in October of 2016 the Bradley Foundation put out a press release saying that they had been hacked and it became quickly apparent … There’s various analysts on all sorts of cyber security newspapers and news letters and all these places believe that the hack was related to the hacker who hacked the DNC. They thought it had some of the same signature elements of the hacker who hacked the DNC. It’s a mystery why this hacker would have hacked the Bradley Foundation, but these materials were put into the public arena and we were interested in the policy that the materials revealed. We’ve been taking a look at some of the Bradley institution’s policies that we’ve been backing, including going from state to state to state to de-fund labor unions, but there’s other policy items here as well.

Sam: I want to talk about those other policy items and I want to talk about their attacks on, or I should say their promotion of climate change denial. But lastly, let me just ask you this before we take the break, were these guys hacked while Scott Walker was still in the primary? Or was this well after that?

Mary: They became publicly available. I don’t know the details of any of this, but they became publicly available in October of 2016. Amongst the many things that the Bradley Foundation does is it does invest in policy related to foreign affairs, it does invest in policy related to Russia, it does invest in policy related to cyber security. Also, the foundation’s head, Michael Grebe is an extremely prominent person, an extremely prominent Republican here in the state of Wisconsin, he used to be the Chief Attorney of the Republican National Committee and he was Walker’s campaign chairman. He was a head of a philanthropic foundation and Walker’s campaign chairman for many, many, many years and he gave up his seat at the RNC convention in order to protest the nomination of Trump. There’s a lot of interconnections here and perhaps some of those facts explain the hack.

Sam: All right, well we’re gonna take a break and when we come back we will turn our attention to those projects that the Bradley Foundation intends to engage in outside of Wisconsin, including a tax on public sector unions, including funding of climate change denialists and a lot more. We gotta take a quick break, we’ll be right back with Mary Botarri from PRWatch.org. We’ll be right back after this.