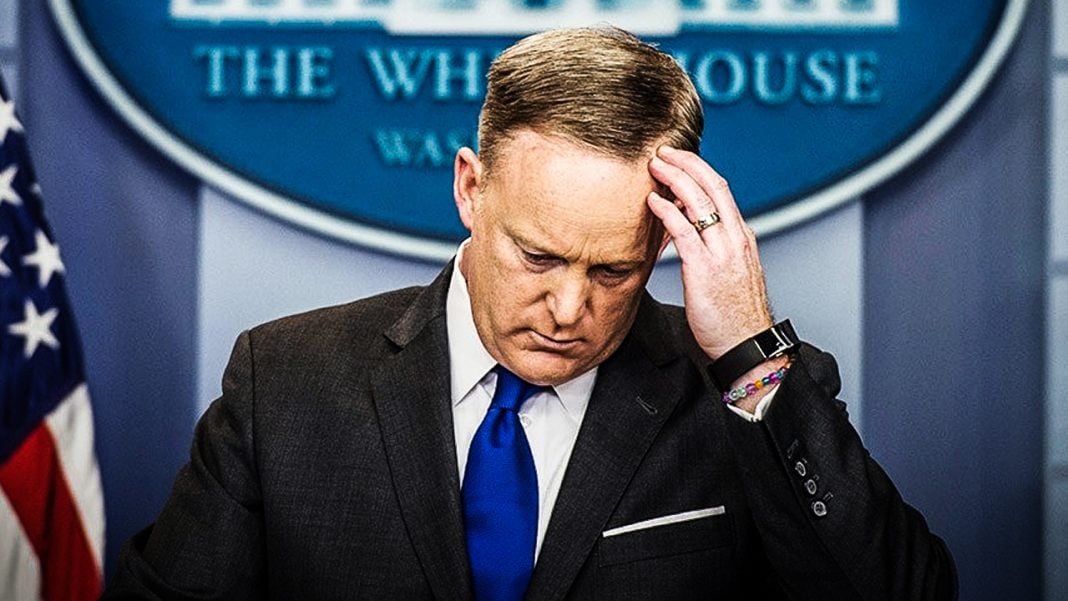 The New York Post is reporting that the White House is going to scale back on its daily press briefings, offering fewer chances for the press to ask questions about what’s happening in the Administration.  Could Sean Spicer’s job be on the line?  Let’s hope so. Ring of Fire’s Farron Cousins discusses this.

Sean Spicer’s days as White House Press Secretary certainly appear to be numbered at this point. According to a report in the New York Post, once Donald Trump returns from his trip going to Saudi Arabia, possibly the Vatican, they had actually wanted to cancel that, and then culminating with a meeting with NATO leaders, Donald Trump is expected to return from that trip and make some dramatic changes to his communications team. One of those changes, according to the Post, according to POLITICO as well, is that Sean Spicer may no longer be the fact that we see every day at those White House press briefings.

In fact, according to these reports, we might not even be getting daily White House press briefings anymore. This is something Donald Trump has hinted at on Twitter several times. He’s mentioned it in person. He doesn’t like these daily briefings. He doesn’t like to have to take time out of the day for his people to go out and do their actual job. He doesn’t like reporters asking questions about what’s happening, but more importantly, according to these reports, he is beyond angry about how horrible his communications team has performed in the wake of all of the recent scandal surrounding the Trump Administration.

A week ago, he was heard in the halls of the White House screaming, cursing. A few days before that when the Comey memo came out, we had members of the communications team, Bannon and Spicer and Huckabee Sanders, behind a closed door where reporters could clearly hear them screaming at one another. So yeah, you know what, I get it. I understand why Donald Trump probably isn’t super happy with his communications team, but at the same time, this all flows from the top. If they don’t know what’s going on, it’s not necessarily their fault. That’s your fault, Donald Trump.

The solution to this situation, as much as I hate the guy, isn’t to get rid of Sean Spicer. Maybe it’s to coach him a little bit. Maybe fill him in occasionally on what’s going on. We’ve seen from reports in the past that most of the time Sean Spicer has no idea what’s going on in the White House, doesn’t know what Donald Trump is doing, and more importantly, doesn’t even know physically where he is. And yet you expect him to go out and answer those kinds of questions for reporters and then you get mad when he says something completely ridiculous.

Now I know Sean Spicer has said plenty of stupid things that have nothing to do with Donald Trump. The whole Assad being worse than Hitler thing was pretty bad, but a lot of the screw ups of Sean Spicer can be placed squarely on Donald Trump’s shoulders.

But, if these reports are to be believed, when he returns from his trip Sean Spicer might have a bit of a different role in the White House. He might be in charge of written communication. He might be in charge of more of the behind the scenes stuff and Sarah Huckabee Sanders will then become the face of the White House. And to be honest, Sean Spicer probably deserves that break. I know I have no sympathy for the guy, but at the same time, you have to admit it’s probably not easy going out there every single day, facing people that you know you’re going to have to lie to and tell them things that you personally know are not true. He needs a little bit of a break, but again, it’s hard to have any sympathy for this guy at this point.