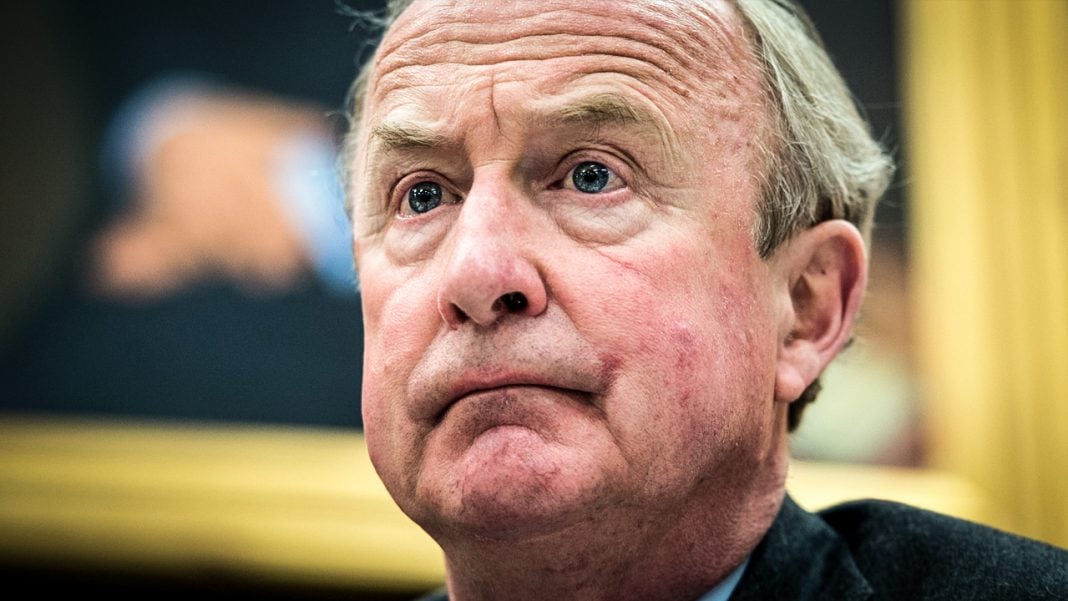 Republican Rodney Frelinghuysen was furious over a woman’s political activities and involvement, and when he found out that her employer just happened to be one of his biggest donors, he decided to write a personal letter to the employer in an attempt to intimidate the activist.  Frelinghuysen prevailed, and the employee/activist resigned from her job due to his harassment. Ring of Fire’s Farron Cousins discusses this.

You’ve probably never heard of Republican Rodney Frelinghuysen who, for this point forward, I will simply call Rodney. Recently Rodney got a little angry at a progressive activist in his home state of New Jersey. So, he did what every rational Republican would do, and he found out where this woman worked. It turned out she worked for a bank, and the owner of that bank just happened to be a huge campaign donor for Rodney Frelinghuysen. As a result, Rodney decides to pen a letter to the owner of this bank explaining, basically, what a horrible person this woman, this progressive activist, is because she engages in this atrocious behavior, according to Representative Rodney there.

This woman ended up, after Rodney sent this letter, she resigned. She was vice president at this bank. Not the vice president, but a vice president of a certain branch. Probably a very good paying job. Probably one that she has worked at for a very long time, worked her way up that ladder. She had to resign because of bullying from a congressman, a sitting, United States, member of the House of Representatives. Is that what we’ve come to in the United States today? Where a sitting member of the House of Representatives can get pissed off at somebody and write a letter to their employer … He was trying to get her fired. Let’s be completely honest. He was trying to get her fired. She wasn’t going to let them have that kind of satisfaction. She didn’t want to keep a job at workplace where she knew she would be bullied from that point forward, so she resigned because of this congressman. Gave up her livelihood because of this congressman’s anger and his immaturity. That’s what we’re talking about here. That’s what this story is really about.

Now, hopefully, the woman involved here, and I’m not going to say her name because I don’t want to draw any more negative attention to her, depending on who’s watching this video. She has a very strong case for harassment should she choose to take Representative Rodney Frelinghuysen to court. I hope to god she does. I hope that she has already filed a lawsuit against him for this form of harassment which is unacceptable for a sitting member of congress. Hell, it’s unacceptable for any member of the human race living in the United States. We’re better than this folks, or at least we used to be. I know we’re not anymore, but at one point in our history we were, and it wasn’t that long ago.

Now, because of the bully-in-chief, Donald Trump, Republicans in the House and Senate feel perfectly fine acting the same way. What kind of message is this sending to kids all over this country? I mean, we’re already seeing it trickle down into grownups, alleged grownups, like Representative Rodney here. This is the behavior of a bully child, and it comes from the top. Donald Trump gets away with it, so why won’t this Republican try it? Hell, now we did, and he was successful. Who’s next?

Republicans like to talk about trickle down theory. Well, guess what? The bully mentality is trickling down. That’s not something that we want to see in the United States. That’s not something that we need any more of. We don’t need a bunch of Republicans walking around thinking they’re people like Donald Trump, and they can just bully everyone until they get their way. That’s not how this country has worked in the past, and it’s damn sure not how it’s going to continue to work in the future. Hopefully, when the day comes that we finally get some evidence to impeach Donald Trump, it’s going to send a message to people like Rodney Frelinghuysen that you cannot bully your way through life, because eventually you will face these negative consequences. The same kind of consequences that you have inflicted upon people throughout your entire career.