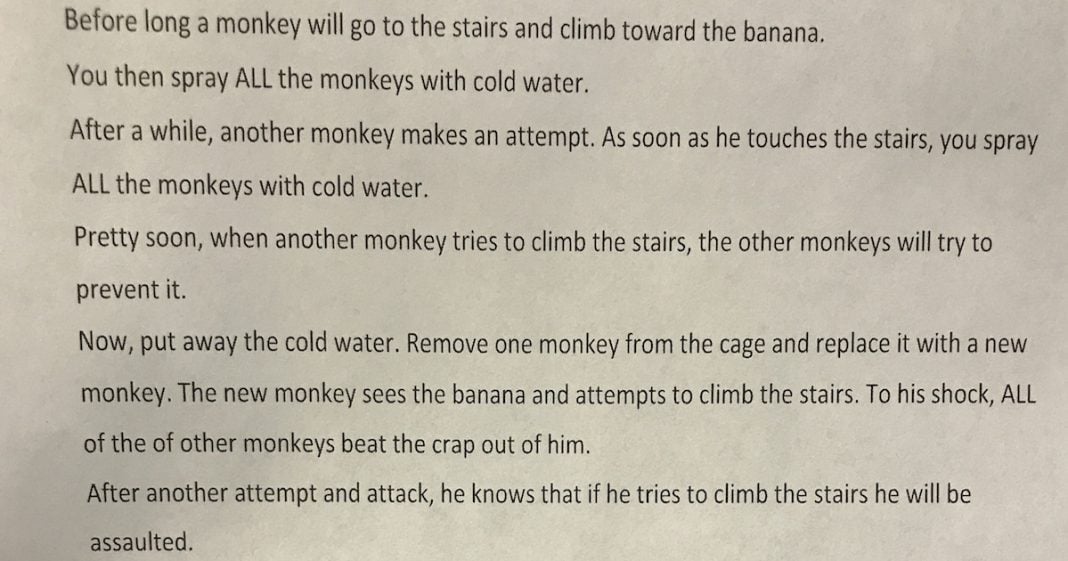 This week, Alabama Republican Representative Lynn Greer forwarded an email from a constituent to fellow lawmakers that seemingly compared African-Americans to monkeys. The email was circulated as black lawmakers tried to fight unfair redistricting practices being taken by both the House and Senate.

The email carried the subject line “POLITICS Psychology” and described an experiment in which caged monkeys are discouraged from attempting to reach a banana by spraying them with cold water. The caged monkeys and those who subsequently replace them will eventually accept that the banana cannot be obtained, “[b]ecause,” the email explains, “in their minds, that is the way it has always been!”

The email concludes by saying:

“This is how today’s House and Senate operates, and this is why from time to time, ALL of the monkeys need to be REPLACED AT THE SAME TIME!

DISCLAIMER: This is meant as no disrespect to monkeys. ***”

The Legislative Black Caucus held a press conference on Wednesday to condemn the email. Representative John Rogers said that spraying the monkeys with cold water was reminiscent of fire hoses being used on civil rights activists in 1963. Rep. Rogers said, “I haven’t seen this kind of disrespect in my entire life.”

The chairman of the House Black Caucus, Rep. John Knight said of the email:

“There is no place in the State House for this type of emails to be circulated. We resent it and we will not tolerate it. Our voices have not been heard, and we have been subjected to the most racial insult that I’ve ever seen.

“Being a veteran of the Vietnam War, being a citizen of the United States, being a resident of Alabama, it is unacceptable, and we will not continue to take this kind of action.”

Rep. Greer claims that he had no racial intent when he forwarded the email. He released a flimsy excuse disguised as a statement that read:

“The case study in the email that I forwarded has existed for decades, and a simple Internet search shows that the story is based upon actual psychological experiments that were conducted by in the 1920s. The body of the email has been reprinted – word for word – in several magazines, textbooks, and journals, such as ‘Psychology Today,’ and it even has its own Wikipedia page.

A constituent sent me the email, which has been distributed nationally and compares the experiment to today’s political climate in the U.S. Congress, not the Alabama Legislature.  The last paragraph of the email implies that ALL incumbents, whether Republican or Democrat, should be replaced.

Without comment or edits on my part, I forwarded the email to various members who might have an interest, and, as a result, it has been taken out of context and given a meaning that was not intended for pure political purposes.  For that, I apologize to my colleagues.”

The email was sent as the Republican majority in both the House and Senate have debated fiercely with the Black Caucus over redistricting. In January, a federal appeals court ruled that the state of Alabama unconstitutionally gerrymandered based on race. Because of the ruling, nine House districts and three Senate districts must be redrawn. Democrats, led by the Black Caucus, have used filibustering rules and motions to read the bills at their full length to disrupt the GOP plan for redistricting.