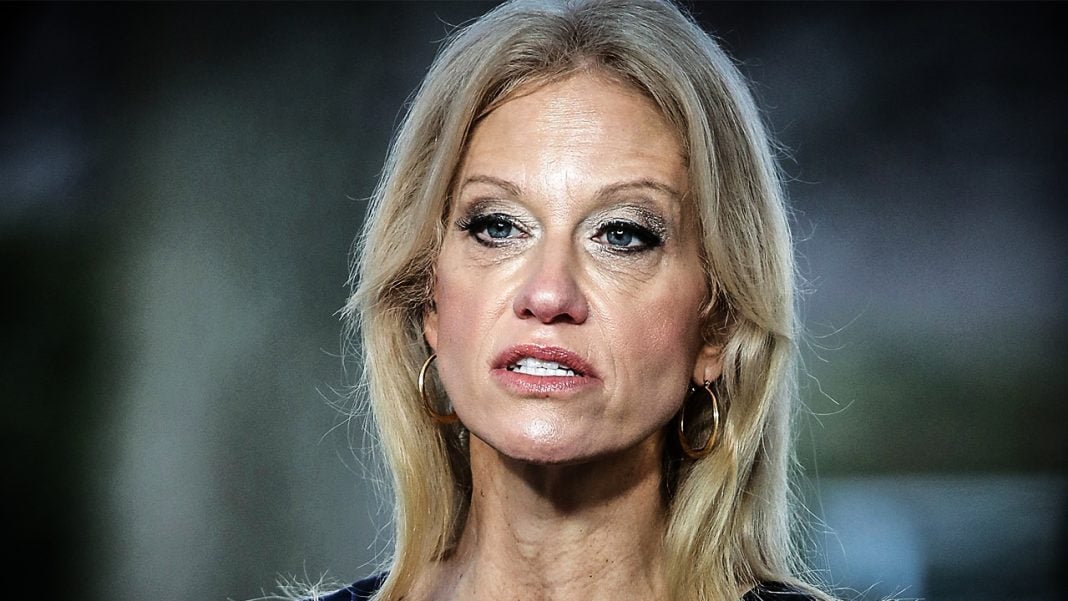 Kellyanne Conway was scheduled to appear on Tucker Carlson’s Fox News program Wednesday evening, that is until news broke that a special prosecutor had been selected to investigate Trump. After that announcement, she abruptly cancelled her appearance. I guess even Kellyanne knows that there’s no defending Trump anymore. Ring of Fire’s Farron Cousins discusses this.

On Wednesday evening, White House counsel, White House advisor, her title changes quite frequently, anyway, Kellyanne Conway was scheduled to go on Fox News’ Tucker Carlson program, but shortly before the program aired, Kellyanne Conway pulled out. You know what else happened shortly before that program aired? It was announced by the Department of Justice that Special Prosecutor Robert Mueller had been called in to take over the investigation into Russian interference with the United States election, and collusion with the Donald Trump campaign. Kellyanne Conway pulled out of her appearance on Tucker Carlson because she didn’t want to talk about those things, and to be honest, there’s no way you could go on a news show yesterday without talking about that.

But this story’s a little more than Kellyanne Conway saying, “Nope, nevermind, I don’t want to go on.” The reason she was booked on Tucker’s Carlson’s show in the first place is because the White House reached out to them and requested it. This wasn’t Tucker Carlson’s producers calling Kellyanne Conway, saying, “Hey, do you want to come on?” This was the White House reaching out, making that connection, securing that appearance, and I guarantee you the decision to pull out was not necessarily made by Kellyanne Conway, it was made by higher-ups at the White House who are sick and tired of having their people go out there and say things that aren’t necessarily true, especially now that we have a special prosecutor. But building off everything we have learned about Kellyanne Conway from the last week or two, I do believe that she did have some say in withdrawing from that particular appearance.

I think, at this point, Kellyanne Conway realizes, there is no good way to defend Donald Trump anymore. When you have somebody who has been as loyal as Kellyanne Conway who finally just says, “I can’t do this,” you know you’re having severe problems within your administration. Your biggest cheerleader is having to pull out of appearances on Fox News, but not just Fox News, on the friendliest Trump show on Fox News, which is Tucker Carlson. If she can’t even handle that kind of interview, if the White House is scared of what Tucker Carlson might ask them about this, how are they going to handle it when CNN makes a call, or NBC, or ABC, or CBS? When you’re too scared to even talk to your friends who you know aren’t going to ask you any tough questions, you’re in a real predicament, and that’s what the White House has found itself in today, and that’s why Kellyanne Conway had to pull out of that appearance on Tucker Carlson’s program.

They can’t even trust, and to be honest, Fox News can’t even ignore the mounting disaster coming out of the White House, at this point, literally on a daily basis. We’re not going a single day without some new WTF story coming out of the White House, and I know people like Kellyanne Conway and Sean Spicer, they’re probably getting tired of it. There’s only so many times that you can put your own morals aside, your own credibility aside, in order to go out there and defend this childlike administration when they commit yet another atrocity, yet another potential crime, that you have to go out there as Kellyanne Conway or Sean Spicer, and whitewash for the America public, and tell them, “No, don’t worry, this is no big deal.” As Tucker Carlson said the night before, “Things aren’t always what they seem in these kinds of stories,” but at this point, Tucker and Kellyanne and Sean Spicer and all the rest of you, I hate to say it, but things are exactly as they seem at this point.