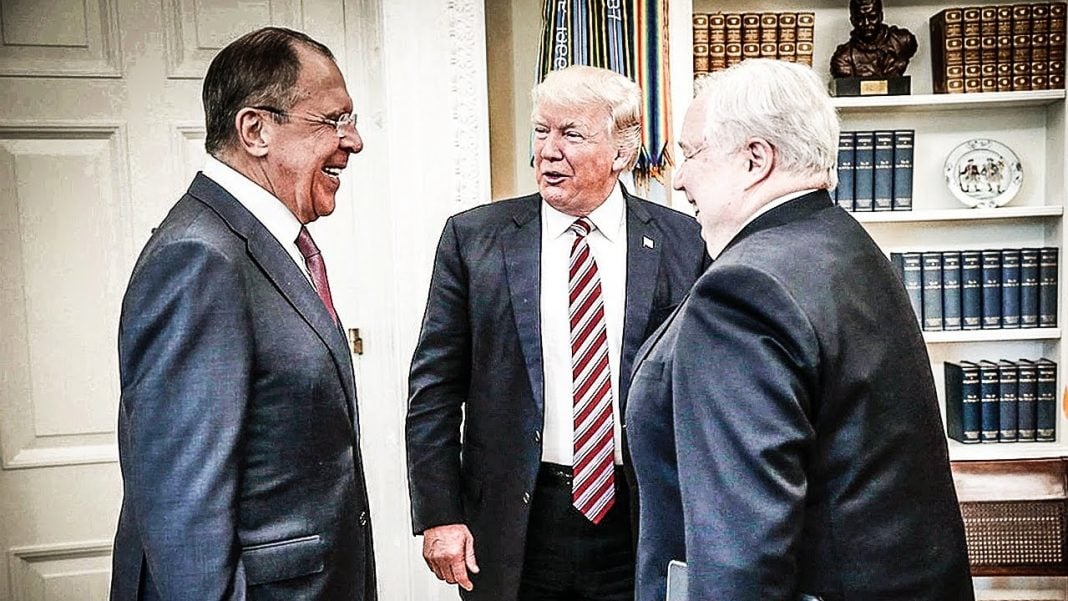 Monday’s big story was about “the Donald” flapping his gums, bragging to high-ranking Russian officials about how he gets “great intel” – then proceeding to leak highly secretive information obtained from an unidentified “U.S. partner.” Today, that partner has been revealed as one of America’s closest Middle East allies in the “War on Terror” – the state of Israel.

Leaking this information to representatives of the Russian government may be tantamount to treason, but betraying the trust of the only real friend the U.S. has in that part of the world is equally inexcusable – and could prove to be an unmitigated disaster. Not only has Israel been a close and reliable ally, Israeli intelligence has been invaluable in ongoing efforts to contain and defeat ISIS.

On the other hand, Russia has been good buddies with Iran since the old Soviet regime was the first to extend formal diplomatic recognition to the Islamic Republic in 1979. Iran is also a nation that has vowed to destroy Israel more than once. It doesn’t take a genius to see the possible dire consequences here – and loss of the bond of trust between the U.S. and Israel isn’t the worst of it.

Putting further strain on U.S.–Israeli relations is National Security Director Gen. H.R. McMaster’s refusal to acknowledge the Western Wall as part of Israeli territory. Also known as the “Wailing Wall,” this structure is a remnant of the Second Jewish Temple built under King Herod the Great around the year 19 CE – and is considered to be the second-holiest site in Judaism after the Temple Mound itself. Earlier this week, a U.S. official charged with planning Trump’s impending visit to Israel ruffled feathers when he commented that the Western Wall was part of the West Bank, and therefore located in Palestinian territory. Although the White House claims the official was not speaking for the Trump Administration, McMaster has dismissed the controversy, saying “It sounds like a policy decision.”

Returning to the subject of intelligence breaches, Israeli officials were warned earlier this year in a closed meeting by those in Washington D.C. to be careful of what information was shared with the incoming Trump Administration, due to its alleged ties to the Kremlin. Now that Russia has information on Israel’s espionage methods and sources, there is a high probability that it will make its way into Iranian hands.

Meanwhile, as Trump’s enablers defend his indefensible actions here at home (or at least attempt to deflect attention from them), Russian officials are dismissing all of it. Dmitry Peskov, a Kremlin spokesman, told the Israeli news agency Haaretz, “This is not even an issue for us…we want nothing to do with this nonsense.”

At the same time, Israel neither confirms nor denies being the source of the leaked intelligence. Israel’s U.S. ambassador Ron Dermer assured Washington that “Israel has full confidence in our intelligence-sharing relationship with the United States and looks forward to deepening that relationship in the years ahead under President Trump.”

Whether or not that confidence is warranted remains to be seen.