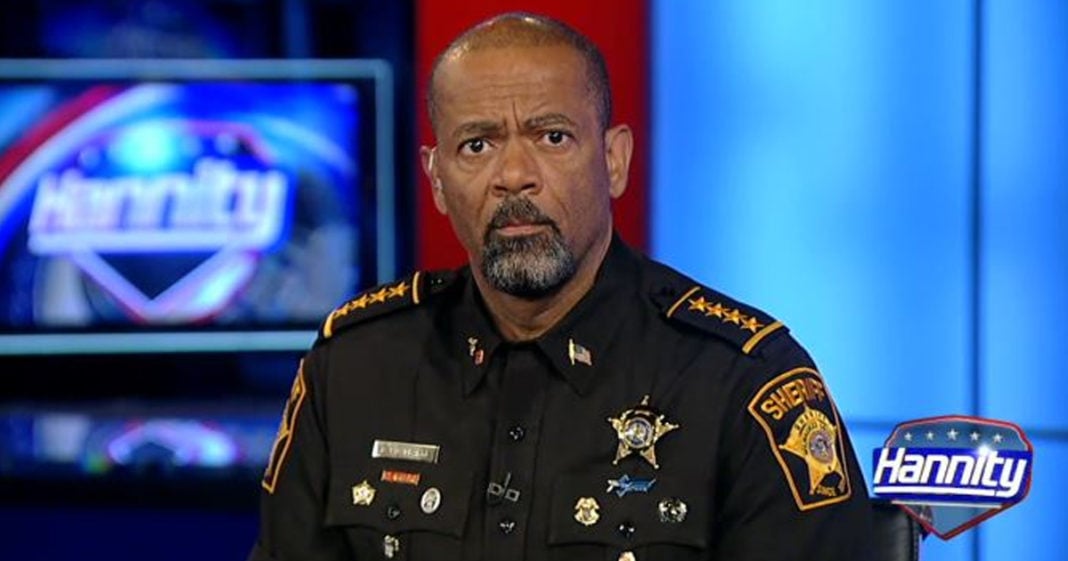 Sheriff David Clarke, a man who should be sitting in a jail cell facing trial for murder, announced on Wednesday that he has been offered a key position in Trump’s administration instead.

BREAKING: @SheriffClarke announces he will “accept an appointment as an assistant secretary in the Department of Homeland Security.”

According to the Sheriff, he will serve in the DHS as an assistant secretary, a position for which he is wholly unqualified.

The news broke Wednesday afternoon, and the general opinion was clear: this is a bad, bad decision. The Trump administration has made it a habit to appoint grossly unqualified individuals to high-level positions, but this one is at the top of the list.

Under Clarke’s leadership, four people have died in the Milwaukee County Jail, including a newborn baby. One of the inmates was beaten to death by a correctional officer. Another, a schizophrenic man, was denied water for over a week before he died of dehydration.

Some blamed Clarke’s political ambitions for the increase in deaths, noting that the Sheriff was too busy making media appearances and trying to flatter President Donald Trump to properly manage his jail.

Outside of his criminal managing of jails in his county, Clarke’s horrific political stances should have been enough to keep him far from any political appointment. Clarke is strongly opposed to Planned Parenthood, referring to them as “Planned Genocide.” When it comes to Black Lives Matter, Clarke, a black man, refers to the political activist group as a “hate group.” Clarke is an unwavering defender of police officers and police departments and has viciously attacked any official who is critical of the job police officers do, even when police brutality is clearly a factor.

Despite all of this, Clarke is technically a registered Democrat. Along with being a black man who actually likes Trump, Clarke has positioned himself to be used by the Trump administration at will. He may be a crook who deserves to be imprisoned for the deaths happening under his watch, but as long as he makes Trump look good, he will have a happy spot in the crumbling administration.