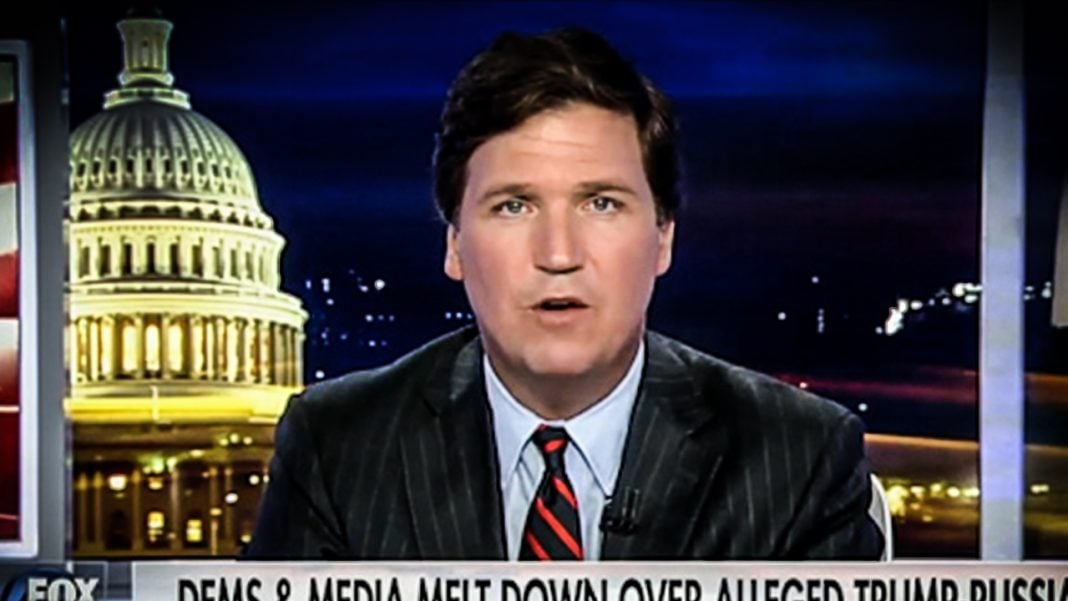 Tucker Carlson knows how to change the subject, and as news was breaking about the Comey Memo that threatens to take down the Trump administration, Carlson spent a few minutes talking about Comey, and then went right into other topics as if they mattered.  Topics included the sudden cancellation of Tim Allen’s ABC show Last Man Standing, and several segments on what Hillary Clinton is doing these days. Ring of Fire’s Farron Cousins discusses this.

Farron Cousins: Due to the Comey memo being released and every outlet basically being forced to address the issue of the Trump administration completely imploding, it was actually a relief last night to see Tucker Carlson on Fox News come out and actually talk about this story in a real meaningful way. Take a look.

Tucker Carlson: It alleged President Trump encouraged him to drop the investigation into former National Security Advisor Mike Flynn. In other words, to obstruct justice. The White House says this did not happen. It’s the biggest story in the world right now. There’s one problem with it, though. Excuse me. The FBI Director did not notify the Justice Department about this, so if it was an attempt to obstruct justice, what do we have? Watch this, a clip from earlier today on another network as someone tries to raise that question. Watch.

Carl Higbie: Who? Yeah, but who? Who are the sources?

Carl Higbie: Who are the sources?

Tucker Carlson: “Be skeptical,” says the retired Navy Seal. “Be quiet,” screams a 33-year-old news anchor, clapping her hands in rage. “How dare you question the authorities?” in this case the news media, quote, “You cannot attack the stellar reporters of CNN,” she says, as if this settles the debate.

Farron Cousins: Okay, maybe that actually wasn’t a meaningful way, but it kind of gives you an idea of how people at Fox News are attempting to handle this monstrosity of a presidency that is falling apart further and further by the day. He starts off by telling us that this is the biggest story, the biggest story in the United States. Nothing bigger. Then, he cuts to a clip, then he comes back and starts attacking CNN, attacking the media, trying to misdirect his audience saying, “Don’t be mad at Trump because things aren’t always what they seem.” That’s what he said about the Russian investigation, about the Comey memo, “Things aren’t always what they seem.” Instead, look how horrible CNN is. Look how horrible the media is. Look how horrible everybody that’s not Donald Trump is. Whatever you do, just for the love of God don’t pay attention to Donald Trump right now.

Now, Tucker Carlson is proving to be one of the most loyal people on Fox News to Donald Trump, and I’m sure that’s probably one of the reasons that he got the time slot taking over for Bill O’Reilly, but you can see from that clip, and if you watch even further into that episode, how he misdirects the Fox News audience. It becomes completely clear why the Fox News audience is consistently rated as one of the most misinformed in this country. He could have discussed the facts. He could have attempted to spin it in a way that didn’t bend reality, but instead he chose to go after CNN and the media and everybody else talking about this story instead of actually talking about the story.

Then, after he covers this issue and then he talks about Russia, saying again, “Things aren’t always what they seem, so don’t get bent out of shape.” He then spends far too much time, several segments of that episode, talking about Hillary Clinton. He talked about the Clinton Foundation. Where is it now? He talked about Hillary Clinton starting a new political group. He wanted his audience to focus on a woman who’s currently not an elected official, not running for anything, according to her, ever again. But, he cannot let go of the Hillary hate and address the fact that the guy he’s been supporting in office is falling apart. Instead, he wants to drum up his conservative viewers to get them to continue hating these liberals who are out there doing things.

Oh, and it’s also worth noting that he spent a little bit of time last night talking about the fact that Tim Allen’s show on ABC, Last Man Standing, was suddenly canceled, as if that’s the biggest story in the world. I mean, Tucker, you literally began your program talking about the fact that this Comey memo was the biggest story in the US, possibly the biggest story in the world right now. Yet, you end your show with a segment on Tim Allen just because he happened to play a conservative churchgoer in this TV show and suddenly it’s canceled, and that’s the worst thing in the world. Maybe we need the FBI to investigate this, right? Tucker, get a hold of yourself. You are destroying your own audience’s ability to think, their ability to reason, by misdirecting, by lying to them, and by talking about things that don’t matter.

There are big things happening in this world right now, Tucker Carlson. I know you have been a faithful Republican cheerleader the last few years, but sometimes you have to put down the pom-poms and understand that you’re doing very real damage to this country. The man that you supported is doing things that are going to end up getting him impeached. You have to be honest with yourself about what’s happening. I know that’s not how your personality is, may not even be what your audience wants, but I can promise you it’s what that Fox News audience deserves.