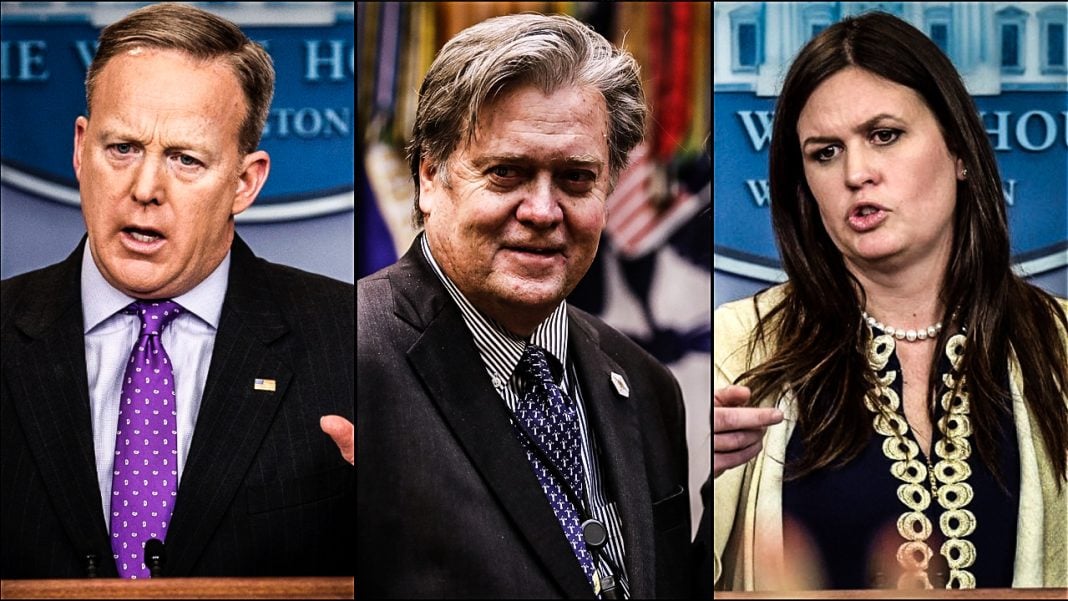 Following the news that the president leaked classified national security information to Russian officials during a meeting, reporters said that Sean Spicer, Steve Bannon, and Sarah Huckabee Sanders entered a room and began screaming at each other.  Reporters said that the TVs in the area were turned up to full volume to drown out the shouting.  Ring of Fire’s Farron Cousins discusses this.

Monday evening after The Washington Post story broke about how Donald Trump revealed classified information to the Russians during a White House meeting last week, Steve Bannon, Sean Spicer and Sarah Huckabee Sanders went into a room together away from the press. The press was right outside, and suddenly reporters in the next room began hearing screaming from the three people who just entered that little separate room trying to get away from the reporters. The screaming was between Bannon, Spicer and Huckabee Sanders because they were so furious, so upset about The Washington Post reporting that Trump had released classified information. In response to the shouting match that was going on behind that closed doors, White House staffers came out and turned all the TVs in that room up to full volume to try to drown out the yelling between the Trump staffers.

Here’s why the this is so hilarious. At this point, we don’t know what exactly they were shouting about. We do know that the reports in the other room were tweeting about this, talking about this, reporting on this. We know it happened but we don’t know if Spicer, Bannon and Huckabee Sanders were mad about The Washington Post story, whether they were mad about what Donald Trump did or whether they were just tired of constantly having to defend this idiot president that we have. To me, that’s what so fun because at this point since we don’t know, we can just use our imaginations and pretend they’re yelling about any one of those things because, to be honest, they probably were.

When you have three people all shouting at each other, it’s a pretty safe assumption that they’re all yelling about something different. Bannon probably mad about The Washington Post. Spicer probably mad about the fact that he knows he’s going to have to come out and face the reporters again on Tuesday, and he’s going to be asked nonstop about this Washington Post story and Trump releasing classified information. Sean Spicer clearly hates his job. Huckabee Sanders clearly wants his job. And, according to reports, both Spicer and Bannon might soon lose their jobs.

You know what? At this point, for the three people in that room shouting at each at other, they really need to ask themselves is it worth it? Is it worth getting this worked up about because you have to constantly defend a man-child president who can’t stop himself from screwing up? I mean, this is what this White House has turned into, a constant shouting match. Nobody trust one another. Nobody enjoys their job. They don’t trust their boss. We’ve had reports that staffers’ cellphones have been searched trying to find the leaker. It turns out it’s probably actually Donald Trump. But, these people aren’t getting along. They’re not happy. The White House has descended into chaos, and it is all because Donald Trump cannot be trusted to keep his mouth shut about important issues when he needs to keep his mouth shut. He is essentially a giant child, and I think at this point that Bannon, Huckabee Sanders and Spicer are all getting tired of playing babysitter to the president.