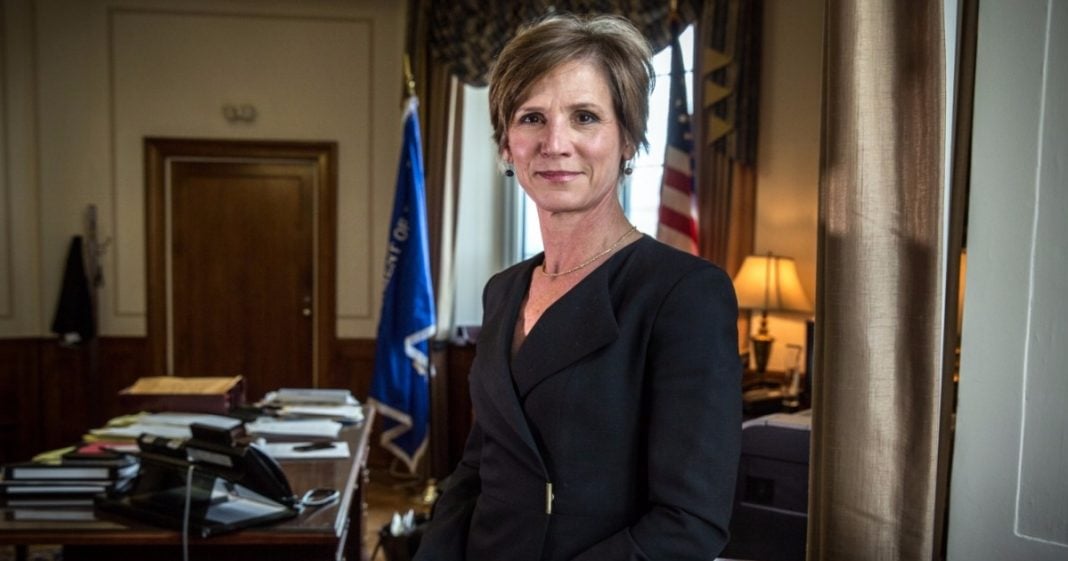 Former acting Attorney General Sally Yates may be riding the wave of her newfound notoriety all the way into elected office.

According to sources in Yates’ home state of Georgia, while the former appointed official claims she is not at all interested in running for Governor of the state, some say that she may consider a 2020 Senate race.

Yates told the New Yorker in an interview that she is completely against becoming Governor of her home state.

“I am totally ruling out the governor’s race. I am not running for governor.”

But that doesn’t mean she’s done with politics altogether.

“I recognize that I may have a voice that I didn’t have before,” she said. “And part of what I want to be able to do is to figure out how I can responsibly use that voice in a way to impact things that I think really matter. I just don’t know what form that takes.”

It’s easy to see why; with Yates’ refusal to uphold Donald Trump’s unconstitutional travel ban, coupled with her fearless and unwavering testimony before the Senate, the former A.G. has shown that she has what it takes to fearlessly lead.

Women in search of a real feminist heroine in a time of Ivanka Trump’s style of pretend feminism can now look to Yates’ unwavering strength and competence as a real example of what it means to be a strong woman. As she was pelted with insolent, outrageous lines of questioning from men of the GOP, Yates never appeared unsure, and she ran circles around even the most aggressive opponent.

In a time when most politicians are willing to bend to whomever is in power, Yates’ refusal to bend is precisely why almost anyone now knows her name. In this time, we can’t let potential and leadership like that fade away.

If the sources are true and Yates really is headed for a political run, she will have monumental support behind her for her strength against this corrupt administration.