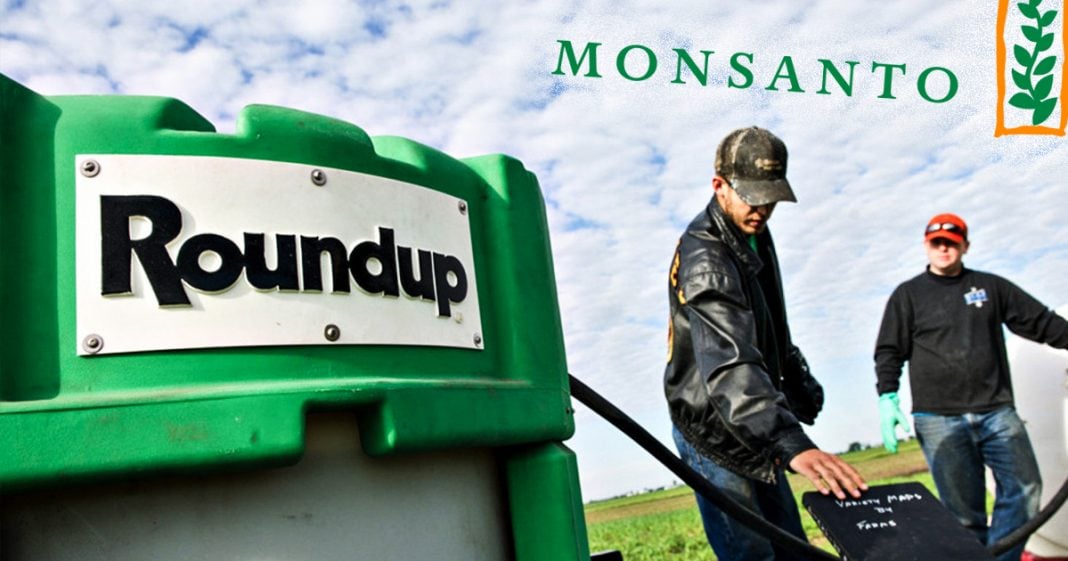 You have probably seen that The Ring of Fire and Mike Papantonio of America’s Lawyer have covered Monsanto extensively lately for newly exposed court documents detailing the chemical giant’s dastardly efforts to deceive the public about their deadly products, especially Roundup, the best-selling weed-killer in the world. While Monsanto continues to face harsh allegations, their products continue to fly off the shelves. However, Roundup is hardly the first time Monsanto has come under fire for their products. The company has a long history of churning deadly chemicals out to the masses and has gone to extreme lengths to cover up their misdeeds.

In February, San Francisco’s Northern District Court ruled that Monsanto had to unseal embarrassing communications related to the cancer-causing chemical glyphosate. Plaintiffs are coming forward in a class action lawsuit claiming that using the popular weed-killer Roundup, which contains glyphosate, has had carcinogenic effects. Gardeners, nursery workers, landscapers, farmers, and agricultural workers have seen a rise in both Hodgkin’s and Non-Hodgkin’s Lymphoma, as well as Hairy-Cell Leukemia, Chronic Lymphocytic Leukemia, and Multiple Myeloma.

The State of California has already ordered Monsanto to place labels on Roundup, telling consumers that using the product may cause cancer. In 2015, the International Agency for Research on Cancer (IARC) of the World Health Organization (WHO) declared that glyphosate likely caused cancer. In the wake of these revelations, hundreds of lawsuits have been filed against Monstanto.

During one lawsuit, it came to light that Monsanto conducted “ghost-written” studies which painted their products in a favorable light. The company would then pay researchers to sign their names to the research to dupe the public. Papantonio describes these bought-and-paid-for scientists as “biostitutes.” (story continues after video):

Monsanto then hired armies of internet trolls to spread the fake research on Facebook, Twitter, and Reddit. Social media users even started to intentionally misspell the company’s name as “Monsant0” to thwart the provocateurs, when discussing the cancer-causing chemicals.

Monsanto even went as far as to cozy up to federal regulators to influence the outcome of investigations. In April 2015, Jess Rowland of the Environmental Protection Agency (EPA) bragged in a phone conversation that he deserved recognition if he could halt an investigation that was being conducted by the Agency for Toxic Substances and Disease Registry, which is part of the US Department of Health and Human Services (HHS). Rowland told a Monsanto executive, “If I can kill this I should get a medal.” Judge Vince Chhabria, who is overseeing the case, said that he may call Rowland for questioning in the cancer suit. Petitions are now circulating calling for a wider investigation into Monsanto’s collusion with the EPA.

Mike Papantonio is ready to take on the chemical giant, saying:

“Monsanto has hidden behind lies for too long. I’m going to devote the next few years to uncovering those lies.”

Papantonio has set up a website for those that have been hurt by Monsanto’s deceptive measures. You can find out more information on the legal fight against Roundup at the following link: ROUNDUP Lawsuit

Of course, this is hardly the first-time Monsanto has had to answer for its deadly chemicals. In 1984, Monsanto paid the bulk of a $180 million settlement in a class-action lawsuit that linked Agent Orange to Vietnam veterans’ medical problems. In 2013, the company had to pay $93 million to the town of Nitro, West Virginia for contamination resulting from an Agent Orange manufacturing plant in the town.

The company, along with their corporate spin-off Solutia, has also paid out hundreds of millions of dollars for health issues related to polychlorinated biphenyls, or PCBs, which also has been shown to cause Non-Hodgkin’s Lymphoma. A trial in West Anniston, Alabama, found that Monsanto and Solutia were liable for “negligence, nuisance, wantonness, and suppression of the truth.” The resulting settlement cost Monsanto and Solutia over $700 million.

Additionally, Monsanto was found guilty in a French court for the chemical poisoning of a farmer that used the very popular herbicide, alachlor, which is marketed as Lasso. The farmer complained of headaches, memory loss, and stammering after using and inhaling the weed-killer.

Monsanto has also spent millions of dollars fighting legislation that would require genetically modified foods to be overtly labeled. The company has bought plenty of support for their genetically modified organisms (GMOs) within the government. (article continues after video)

It is important to note that Monsanto has also been forced to pull many advertising campaigns for spreading false information in them. New York’s Attorney General, the UK Advertising Standards Authority (ASA), and the French Supreme Court all have ruled the Monsanto’s marketing of Roundup as safe, non-toxic, and biodegradable has been misleading. Additionally, a Brazilian Regional Federal Court and the South African Advertising Standards Authority have ruled that Monsanto made “unsubstantiated” claims about genetically modified crops.

Their campaigns to sell the public on their deadly chemicals have been utterly shameless. A scientist, Dr. Patrick Moore, even went as far as to claim that Roundup was perfectly safe to drink. But refused to drink the herbicide when a French TV host challenged him to do so. (article continues after video)

After losing out on a bid to acquire the controversial company Syngenta, Monsanto now has its sights set on a $66 billion merger with the chemical company Bayer. The companies are hoping that the Trump administration will help push through the complex merger. Farmers are fearful that the merger will raise seed and pesticide prices while also halting innovation. Small to medium farms will be squeezed to the brink of survival. Meanwhile, newer and safer products will have a hard time coming to market.