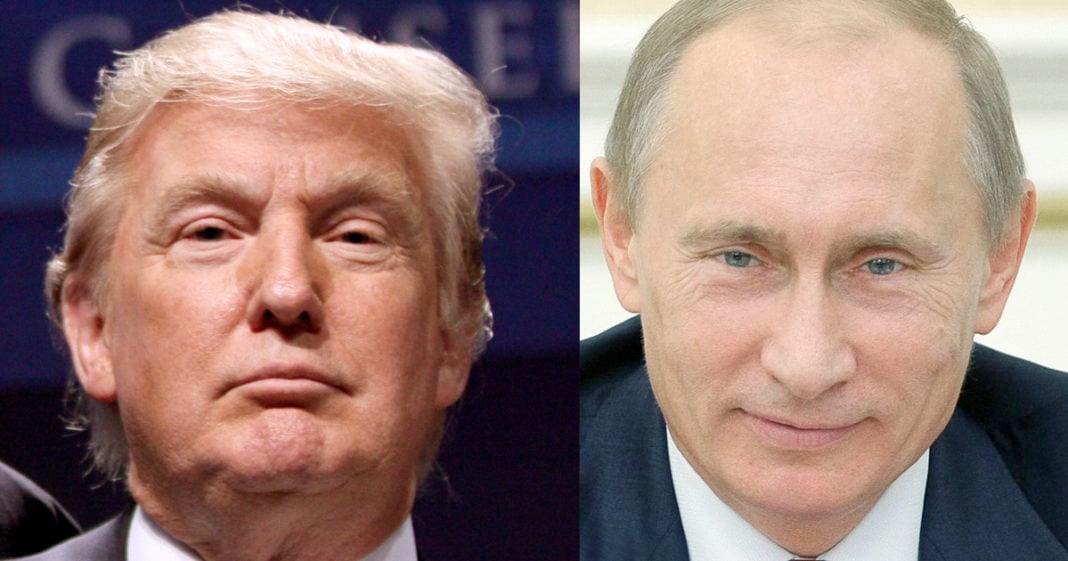 Let’s see “the Donald” worm his way out of this one.

Late last night, numerous media outlets broke the news that Donald Trump, the man-child who would presume to “lead” the Free World, revealed “highly classified” information on ISIS to Russia’s ambassador Sergei Kislyak (who figured prominently in the recent controversy surrounding former security director Michael Flynn) and foreign minister Sergei Lavrov. This willful and deliberate breach of sensitive intelligence by our so-called “Commander-in-Chief” was committed during a meeting at the White House, a meeting in which Kislyak’s presence was not even disclosed.

According to the Washington Post, Trump gave the high-ranking Russian officials details of an ISIS plot involving the use of laptop computers aboard aircraft. In March, Britain and the U.S. banned passengers from ten predominantly Muslim countries from carrying such electronics aboard commercial flights.

WaPo reported that the classified intelligence consisted of “code word” information that came by way of an intelligence-sharing agreement between the U.S. and an unnamed “partner.” Details of this arrangement are sensitive enough to be restricted to those in government holding the highest security clearances.

According to a U.S. intelligence official who was privy to the details, Trump “revealed more information to the Russian ambassador than we have shared with our own allies.”

The leak has now put cooperation from at least one of those allies – which has inside information about ISIS – at risk. One of the basic reasons: the intelligence did not belong to the U.S., and neither Trump nor anyone else in the intelligence community had authorization to share it with anyone else. Rules of espionage clearly state that governments and individual intelligence agencies retain full control over such information, even after it has been passed on to a trusted ally.

Thanks to Trump’s stupidity and recklessness, that trust between the U.S. and its allies is now at risk. The unnamed partner providing the intelligence in the first place has expressed frustration in the past at the U.S.’s inability to keep secrets on ISIS activities in Syria and Iraq. The anonymous source in the State Department said, “If that partner learned we’d given this to Russia without their knowledge or asking first, that is a blow to that relationship.”

Details of what was actually leaked have not been released, but numerous sources report that the intelligence included information on military operations in the region and what steps are being taken to contain terrorist activities. Trump may just as well have broadcast it to ISIS over the airwaves.

Why did he do it? To feed his own bloated ego. According to a report in the U.K. Daily Mail, Trump was bragging. To Russian foreign minister Lavrov, he remarked, “Can you believe the world we live in today? Isn’t it crazy?” then said, “I get great intel. I have people brief me on great intel every day.”

It’s not the first time Trump has gone “off-script” when communicating with foreign leaders or bragged about his so-called “prowess” as a leader. In February, Trump alienated Australian Prime Minister Malcolm Turnbull, criticizing his country’s refugee policies, then boasted about “the magnitude of his electoral college win” while neglecting to mention that he lost the popular vote by a wide margin. Trump also drew fire for discussing classified reports on North Korea in front of dinner guests at Mar-a-Lago about a week later.

Unsurprisingly, White House damage control has gone into overdrive. H.R. McMaster, who has replaced Michael Flynn as National Security Adviser, denies the story altogether, telling the media that “The president did not disclose any military operations that were not already publicly known.”

That is debatable. One thing is abundantly clear, however: Trump is a loose cannon – and an ignorant and stupid one at that.

The National Security Council prepares detailed briefings for the President every day, and part of the job of the Executive is to study those briefs carefully. Trump’s simple mind is incapable of absorbing this information; he demands that this complex information be boiled down to a single page with bullet points.

“[Trump] seems to get in the room or on the phone and just goes with it –  and that has big downsides. Does he understand what’s classified and what’s not?”

Apparently, he does not. And what is even of greater concern is the price our servicemen and women, and even civilians in the U.S. and elsewhere, will pay because of Trump’s “loose lips.”