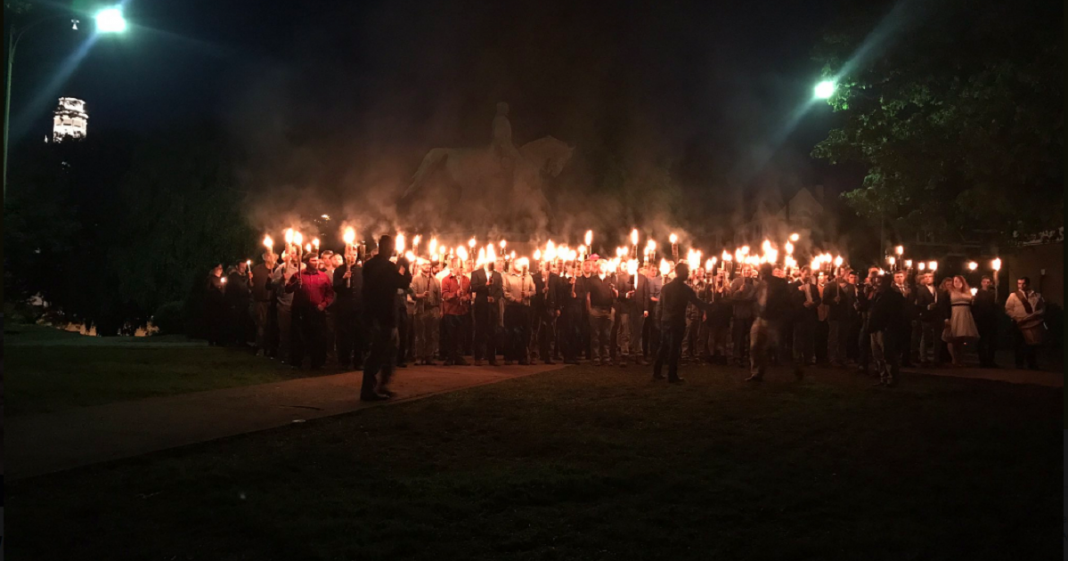 While the rest of the world concerned itself with important issues like global warming, the erosion of the Constitution, psychopath President Donald Trump, and the rising inequality gap between the rich and the poor, a motivated group of pro-confederate activists gathered to protest the removal of confederate monuments from Charlottesville, Virginia.

The demonstration occurred on Saturday night and was in response to the planned removal of a confederate monument in the city. The city plans to remove a state of Robert E. Lee, the continuation of a growing trend in many Southern cities.

Led by white nationalist and self-proclaimed “alt-right” leader Richard Spencer, the group milled about while holding burning torches for approximately 10 minutes on Saturday evening. The group was confronted by counter-protesters, though no one was arrested.

Mediaite reports that the crowd had several chants including “Russia is our friend,” “blood and soil,” and “we will not be replaced.”

The protest was condemned by the Charlottesville mayor Mike Signer who compared the event to a KKK rally. Indeed, the assembly of torch-bearing, white (mostly) men, appeared to many to be KKK inspired, if not a full revival of the historic atrocities.

Of course, the simple presence and sanctioning by Spencer was proof enough that the group was not demonstrating in the interest of American history, but rather in the preservation of white supremacy and its idols.

Spencer responded to the comparison by saying that the use of torches was an attempt at communicating with the dead rather than association with the Klan.