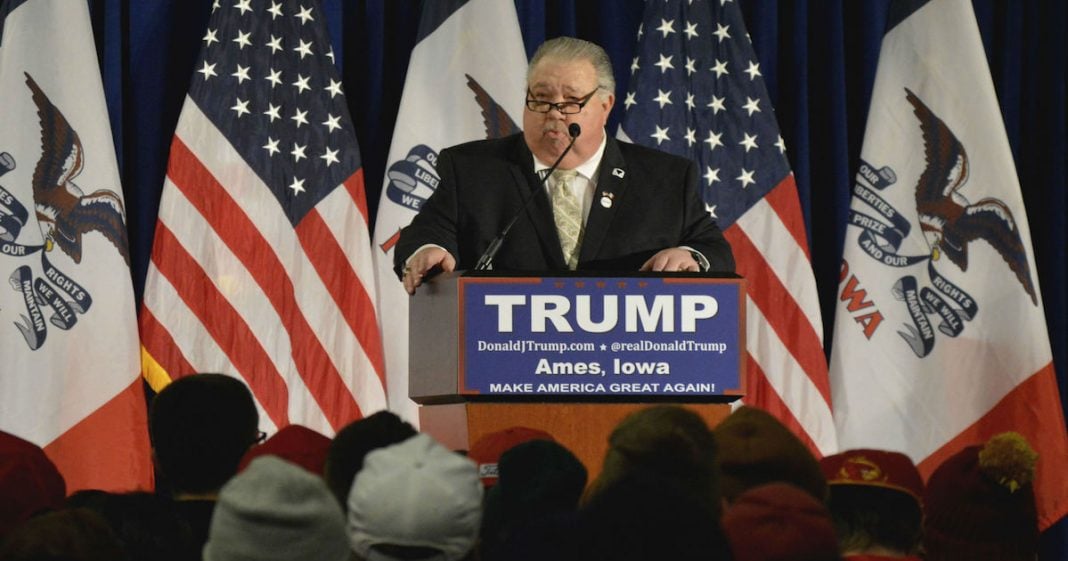 Several outlets, including ProPublica, are reporting that Sam Clovis will be President Trump’s pick to be the USDA’s undersecretary for research, education, and economics. The Farm Bill of 2008 spells out that the position’s nominees are to be picked “from distinguished scientists with specialized or significant experience in agricultural research, education, and economics.”

Clovis, who was a key advisor to Trump during the campaign on agricultural issues, has none of those qualifications. Instead of the necessary background in agriculture, health, nutrition, or any other related field, Clovis considers himself an expert when it comes to homeland security. He was a professor of business and public policy and his only published works center on foreign policy and terrorism. Clovis is far more notable for being a conservative radio talk show host and vocal Trump supporter, appearing on various cable news outlets. He has published no scientific papers and his doctoral work at the University of Alabama apparently required no scientific courses.

Perhaps his lack of scientific background is why he is a climate change denier. ProPublica’s report on Clovis highlighted his disbelief in climate change:

Clovis has repeatedly expressed skepticism over climate science and has called efforts to address climate change “simply a mechanism for transferring wealth from one group of people to another.” He has indicated the Trump administration will take a starkly different approach at the USDA. Representing the campaign at the Farm Foundation Forum in October, Clovis told E&E News that Trump’s agriculture policy would focus on boosting trade and lessening regulation and not the impact of climate change.

“I think our position is very clearly [that] Mr. Trump is a skeptic on climate change, and we need more science,” he said. “Once we get more science, we are going to make decisions.”

In 2001, then-President George W. Bush appointed to the post Joseph Jen, a comparative biochemistry PhD who had previously headed the University of Georgia’s Division of Food Science and Technology and served as the dean of the College of Agriculture at California Polytechnic State University in San Luis Obispo. Bush later nominated Gale Buchanan, a plant physiologist, to the post in 2006.

When Barack Obama took office he tapped Rajiv Shah, who holds both a medical degree and a master of science in health economics from the University of Pennsylvania, for the post.

Catherine Woteki, who earned her doctorate from Virginia Tech and held senior positions at USDA, Health and Human Services and the White House Office of Science and Technology, served as Agriculture’s chief scientist from Sept. 16, 2010 until Jan. 20, 2017. A food nutrition expert, Woteki served as Iowa State University’s dean of agriculture for five years between Bill Clinton’s and Obama’s time in office.

The current acting undersecretary, Ann Bartuska, is described as an ecosystem ecologist who’s served on multiple scientific councils and panels, including the United Nations Intergovernmental Panel on Biodiversity and Ecosystem Services.

Forbes contributor and the Bloomberg Distinguished Professor of Biomedical Engineering, Computer Science, and Biostatistics at Johns Hopkins University, Steven Salzberg believes that Clovis’ appointment will be disastrous, leading to corruption within the USDA:

“Trump’s intention to appoint Sam Clovis as the chief scientist of the USDA isn’t the first demonstration of his incompetence, and I don’t expect it to be the last. What’s most dangerous about this appointment (and others like it) is that incompetence enables and even encourages corruption, because the appointees don’t understand or respect the mission of their own agencies. Instead, they follow their own agendas, whatever those might be.”

Currently, Clovis serves as an advisor to Trump on agriculture and has been responsible for overseeing the administration’s transition team within the USDA.