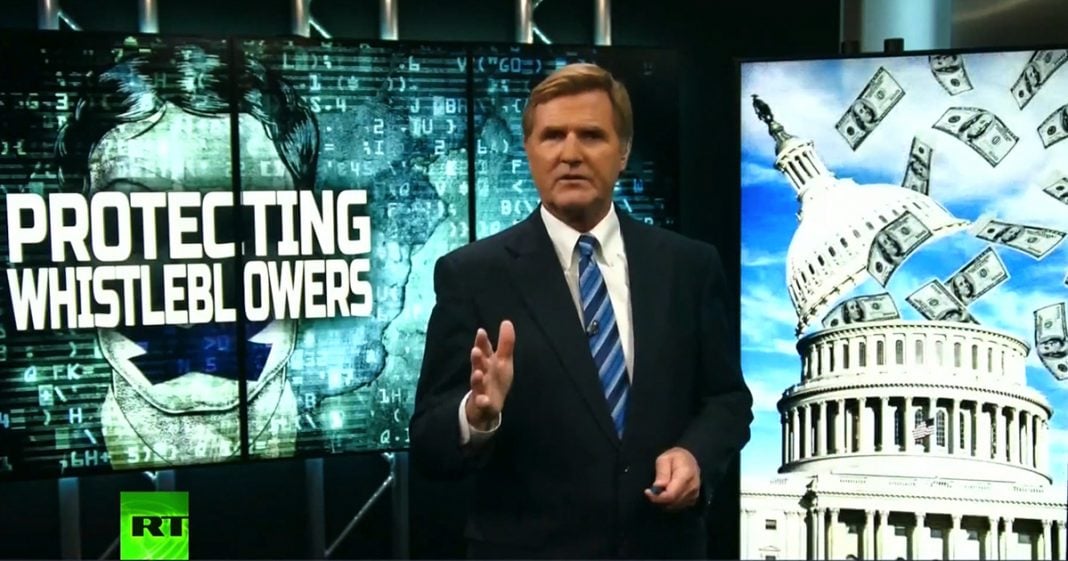 Via America’s Lawyer: Mike Papantonio discusses the process whistleblowers must go through to expose companies that are defrauding the U.S. government and speaks with attorney, Chris Paulos, about some of the biggest cases involving the False Claims Act.

Papantonio: Edward Snowden, Chelsea Manning, Daniel Ellsberg – those are the names that most people think of when they hear the term “whistleblower.” These names have been in the news for years as they helped uncover massive corruption within our own government. But there are other types of whistleblowers that deserve just as much recognition, and those are the people who help uncover the fraud and corruption of massive corporations that do business with the federal government. These whistleblowers receive far less attention in the media, but they are attacked just as viciously as people like Snowden and Manning.

America’s whistleblower story actually begins around the time of the Civil War. As the war began, contractors lined up to get lucrative government contracts to provide supplies for the troops – a trend that continues today. And just like they do in modern times, contractors in the 1860’s wanted to get as much money as possible while providing the lowest quality of service. The government soon began receiving sick horses and mules, shoes that were falling apart, food rations that were rotten, and rifles that wouldn’t fire. This is what their contractors were sending them after getting those lucrative government contracts.

In response to the massive amount of corruption in that contract system, Congress passed in 1963 the False Claims Act that allowed the government to sue companies who failed to uphold their part of the deal when they receive federal contracts. But the law also included a Qui Tam provision, and this provision has proven to be one of the most powerful in that piece of legislation. This provision allowed employees at these companies to sue the company on behalf of the federal government if they discovered the company was trying to defraud the government. This Qui Tam provision is still in place today, and the results have been tremendous.

In 2015, the federal government was able to recoup more than $3.5 billion dollars from corporations in cases brought under the False Claims Act, with more than 70% of that coming directly from Qui Tam cases. In 2016, that number rose to $4.7 billion dollars. Most of this money would have never been recovered had it not been for whistleblowers coming forward to expose the conduct of these corporations.

And that’s why we see corporate media attacking whistleblowers like Snowden and Manning – it isn’t because they think these people harmed our democracy; it’s because they want to discourage all forms of whistleblowing, especially when it could result in huge lawsuits against corporations. They do that by attacking one kind of whistleblower relentlessly, and by that, they are hoping others will be too afraid to come forward.

Joining me to talk about the struggle that corporate whistleblowers face, as well as how they help hold corporations accountable, is attorney Chris Paulos. Chris, tell us a little about the history of the False Claims Act and this thing called Qui tam. Tell us about it.

Paulos: Well, Mike, your intro was pretty spot on in terms of the reason why this law was enacted during the Civil War. The law has evolved over time and during certain periods of time in our history, sometimes it’s been more active or not. For example, FDR pretty much dissolved the Qui tam Statutes and the False Claims Act during World War II, and there was rampant fraud during the ramp up into World War II. However, in 1986, the law was revived and, at that point in time, the teeth were put back into it, providing for rewards and awards to whistleblowers; to those brave folks that stepped forward and report this conduct. They can actually participate in the prosecution of the case with the government and then are rewarded for disclosing the fraud based on the recovery that is realized.

Papantonio: Chris, this is your specialty. Tell us how would a person initiate a Qui tam lawsuit. I mean, they catch the corporation doing something they know is illegal; they’re selling goods to the government; the government taxpayers are paying huge money for faulty goods. How does that person who knows what’s going on initiate this kind of false claim to where they get paid for that claim, and the government, actually we find out who the corrupt corporation is and what they’re doing. How does that happen?

Paulos: That’s a very important question to ask and I’m glad you asked it Mike. It’s because there is a procedure, a very precise procedure of reporting fraud against the government that one must take in order to actually participate in the suit and to stand in the shoes of the government and bring the case, and in order to receive their bounty or their reward for bringing it. And, you should seek the advice of a qualified and experienced lawyer because the way that you disclose the information to the government, and the timing of that disclosure with the filing of your lawsuit, needs to be very precise. And, if someone does that inappropriately, if they tell the government something at one point in time, and then don’t disclose it through the proper procedural framework in the U.S. Courts, they could destroy or ruin their claim. If they run to the media before they file their lawsuit, they could destroy or ruin the chances of them being successful in their claim.

The type of disclosure and the way it’s disclosed, it needs to be done precisely and the law governs that, and the assistance of a qualified lawyer is key in a whistleblower doing that. My first advice would be, contact a lawyer; make sure that you are protected; that you have legal advice; and that you are guided appropriately through the procedural framework of the Qui tam Statutes.

Papantonio: Okay. A couple of things Chris. First of all, we’re seeing a lot more of these cases; we’re seeing more because there are more government contracts that are being given away out there. But, at the same time, we also see huge recoveries where people that are whistleblowers are paid several hundred million dollars sometimes, and people read that story and they say, ‘Well, gee whiz, that sounds easy.’ But the truth is that whistleblower goes through an awful lot; personally, the fight that they have to wage against that corporation usually is huge. Give us some examples of the most impressive Qui tam cases that we’ve seen in recent years.

Paulos: Well, recently, I think one of the poster children cases of a whistleblower award is that of the UBS Whistleblower Award; that was a $780,000,000 fine that was levied against UBS for some tax fraud and other fraudulent conduct. The whistleblower in that case received $108,000,000 award, but that was not without risk. That whistleblower actually went to prison for his participation in the scheme that he reported. Now, granted he was given a significant award, but he also had to serve time, so there are significant risks to blowing the whistle and you need to be aware of those risks when you do it and have proper guidance and counsel when you go forward and report these things to the government.

Other cases that we’ve seen, GlaxoSmithKline, pharmaceutical company that’s on the list of recidivist fraudsters, they paid a $2,000,000,000 fine for multiple different types of fraud that they were doing in the pharmaceutical industry that bilked hundreds of millions, and if not billions of dollars, from the federal coffers through the Medicaid and Medicare Program.

You’ve got Actavis; they were hit with a $202,000,000 settlement after a verdict when a jury found that they had committed fraud against the government. And, you have companies, again, like Bristol-Myers Squibb, half a billion dollar fine levied against them for off-label marketing, and that is inappropriately marketing their prescription drug, Abilify, to patients for uses it was never indicated for.

Papantonio: Chris, let me ask you this. The whistleblower does take a huge risk, but the whistleblower, if they bring the type of evidence that uncovers this kind of fraud that you’re describing right here … By the way 4.7 billion dollars recovered for the government from whistleblowers. If they do their job, what percentage do they get for what they recover; how does that work?

Paulos: Well, the range according to the statutes, the federal statute, is anywhere between 15% and 30%, and that will depend, that range will depend on the type of information that’s disclosed; the role that the whistleblower plays in the prosecution and the presentment of the claims to the government. If they have independent insider knowledge that the government had no access to but for their involvement, then the award will be increased. If they were complicit; if they did not help the government very much or maybe even frustrated the investigation, the DOJ or the government maybe just decide on a lower award. There’s a range and that range is typically 15% to 30%; on average, you’ll see about anywhere between a 17% and 20% award go to just your average whistleblower.

Papantonio: Okay. Chris, you talk to whistleblowers every day. I mean people are always calling you cause this is your specialty, and they want to talk to somebody who has experience. What do you find … What kind of pressure from the company do you see these people usually facing? What’s a typical pressure?

Paulos: Well, oftentimes, you’ll see a culture inside a company that discourages the trickle up of information; or you’ll see a corporate structure that provides for plausible deniability. Oftentimes, people will be discouraged from simply reporting to their superiors something that they see because they fear retaliation, and retaliation in fact is taken against these squeaky wheels, so to speak, inside these corporations. You’ll see folks being terminated, or you’ll see their job being assigned to corporate Siberia, when they start to complain or become vocal about things that they may be seeing on the manufacturing floor, or in the sales practices of a corporation, or in how that corporation conducts business with the government. Internally, you’re seeing companies that don’t foster an environment where disclosure of something wrong is done and that, of course, is an improper type of environment.

Now, the law does provide for protection against those retaliatory actions. The Qui tam Statute will allow you as a whistleblower to include retaliation claims, along with the government claims that you’re bringing, so that certain conduct that you do to report wrongdoing is protected by the federal law.

Papantonio: If I look at these cases, they seem to come from the pharmaceutical industry; they come from the defense industry; they come from hospital corporations; they come from Wall Street in a big way, where we have Wall Street scammers scamming the government for various things. But, I think every time I’ve looked at one of these cases, the thing I’ve seen about that person that’s coming forward, is it takes a great deal of courage; it takes commitment, but in the end, if they do their job an if they really do recover money for the government, they end up getting compensated for it.