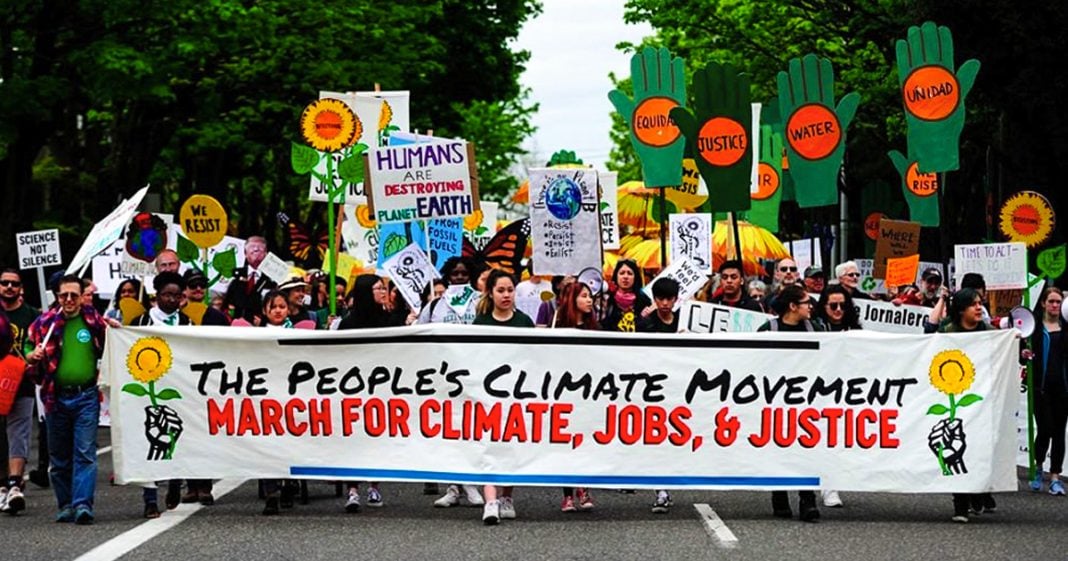 Via ROF Podcast: On Saturday, we had People’s Climate March, which was a wild success except for the fact that we now have a president and administration that does not believe that climate change is real, and a chief of the EPA who is all but a fossil fuel executive. Ring of Fire’s Farron Cousins & Sam Seder discuss how the EPA is doing the business for Big Oil.

Sam: We had pretty sizable climate marches over the past weekend, or last weekend I should say. On Saturday, we had People’s Climate March, which was a wild success except for the fact that we now have a president and administration that does not believe that climate change is real, and a chief of the EPA who … is all but a fossil fuel executive, right?

Sam: I mean, you couldn’t … never mind about getting the diploma from that school … he would be sitting in those boardrooms, if he wasn’t at EPA, doing the business of those boardrooms. We also have 180 climate denying members of Congress, includes President Trump. They have received and this is a total coincidence, more than 82 million dollars from fossil fuel industries. This is according to Center for American Progress Action Fund.

Pretty stunning. And also, not surprising. A little bit of both, in some respects. But this is the one thing that as much as the EPA budget doesn’t get cut, in this latest budget, this is the one thing where the Trump administration has been successful at. And that is, particularly at the EPA, other regulatory agencies, destroying our regulatory state. It just so happens, when you’re talking about the EPA, you’re talking about the future of the planet in a way that you aren’t with any other topic. And frankly, it’s terrifying. It’s enough. They don’t have to be doing any damage anywhere else, they’re doing enough right there at the EPA.

Farron: Absolutely. And you know, the only people who benefit from any of this deregulation within the EPA are people who own stock in fossil fuel companies. Those are the only people that have any benefit whatsoever, and I know they’ve already tried to sell several of these as benefiting small businesses, benefiting home owners and farmers. They have no benefit whatsoever. If any of these regulations are cut, which the Trump administration obviously is moving forward with plans to do that, it’s dirtier air, dirtier water, dirtier soil for all of us, and I did a report last week that outlined that children are the ones who are going to suffer the most out of all of this environmental pollution by a major factor.

I mean exponentially, due to the fact that their bodies are smaller, they consume more air, more water, spend more time generally outdoors. We’re poisoning an entire generation for a handful of fossil fuel shareholders and CEOs.

Farron: You’ve got a couple hundred people that get money off of this, while hundreds of millions are being poisoned just for their benefit.

Sam: Farron Cousins, always a pleasure. Thanks for your time, man.