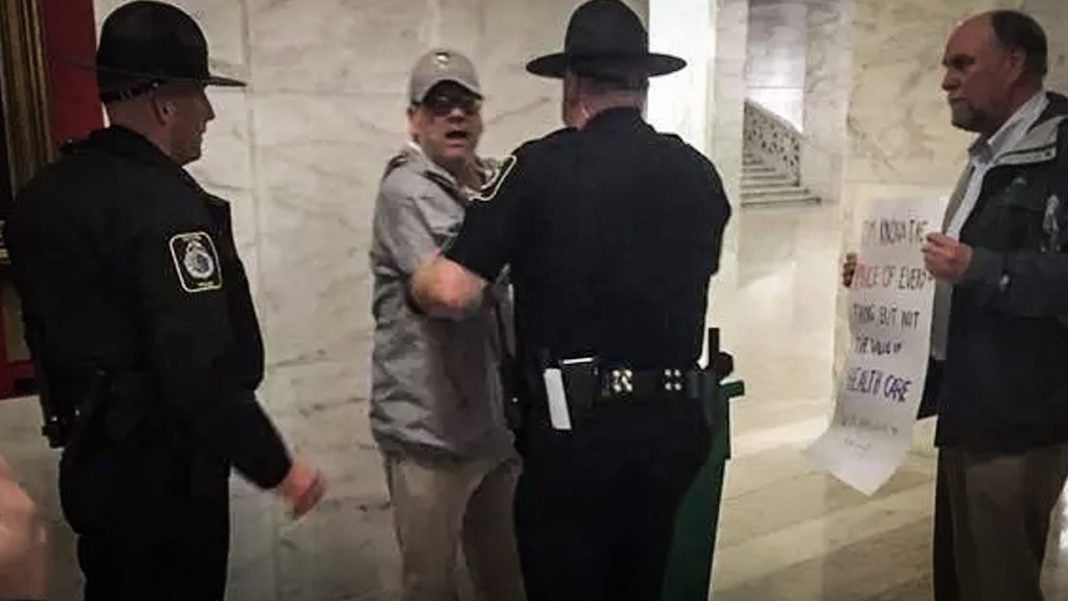 Tom Price, the Secretary of Health and Human Services, was in West Virginia earlier this week where a journalist confronted him and asked if domestic violence would be considered a pre-existing condition under the Republican healthcare plan.  The journalist was soon arrested for pursuing an answer, and that’s about all you need to know about the state of the free press in America in 2017. Ring of Fire’s Farron Cousins discusses this.

Tom Price, the Secretary of Health and Human Services appointed by Donald Trump, was in West Virginia earlier this week, where he was set to address the folks at the Capitol there. During his time at the Capitol, he was approached by a reporter, Dan Heyman with Public News Service, who asked him point blank, “Will domestic violence be considered a pre-existing condition under the Republican Healthcare Plan.” Well, Price refused to answer, so Heyman kept following him, asked the question, had his phone out to record the answer, so that he could print a story on it, yes or no, figure out what’s going on, but instead of ever getting an answer, Capitol police arrived, arrested Heyman, took him to jail, booked him for interfering with processes of the government, and then he was finally released on a $5,000 bail.

Apparently in the United States today, that’s a crime. If you’re a journalist, and you’re trying to do your job, that’s illegal in the eyes of the Republican party. That’s the only way to spin this story about why Andrew Hey- Dan Heyman, excuse me, was arrested. There was no reason to take this man to prison, he wanted an honest answer from the Republicans, and unfortunately, he didn’t get one because he was thrown in jail for exercising his First Amendment freedoms.

That’s what we’re looking at in this country today. Heyman is not the first journalist jailed since Donald Trump took office, and he sure as hell won’t be the last. We saw dozens of journalists arrested at Donald Trump’s inauguration, we found out later on that the FBI is now investigating these people, combing through their social media trying to find something to pin on them, as far as charges go. These arrests aren’t just one and done, “Wow, that was a minor inconvenience, I’m going to move on with my life.” Their lives are still being affected by it, some of them could go to prison because of this, for doing nothing more, than reporting on what’s happening in the United States.

Think of it this way. How often do we hear stories about a journalist arrested or killed say, in Saudi Arabia or Iran, or Russia, or North Korea? Those stories come out all the time, and we in the United States act like that is the biggest deal we’ve ever heard of, “It’s atrocious, it’s disgusting, we’ve got to help those people.” Well how about we start looking in our own back yard here? How about we understand the fact that journalism, the press under Donald Trump, is under attack. He doesn’t like them, he doesn’t like what they do. He doesn’t like that they dare print something critical of him, so we’re rounding them up and throwing them in jail, and trying to come up with as many bogus charges as we can, to put them away for as long as we can. That’s what’s happening.

Again, Heyman’s arrest certainly wasn’t the first, and it absolutely is not going to be the last. When you have an administration like the Trump administration, that is so hostile towards the press, that they’ve even considered doing away with the First Amendment, or re-writing it, or changing libel laws so that they can sue any journalist that dares say something negative about a Republican in the US.

This is 1984 mixed with Mad Max mixed with Dr. Zhivago at this point. That is the America that we live in today, because our government has reached the tipping point of corruption. There was always corruption, there always will be corruption, but at this point, it’s hard to throw a stick in DC and not hit somebody who is absolutely fully corrupt, and it’s the job of the media, these journalists like Heyman, to go out there and report on it, so people in this country understand the truth, so that just maybe in the next election, we can make an informed choice. Well, I can tell you, it’s going to be a helluva lot harder to make informed choices when the people out there, who are trying to educate us, all end up in prison.