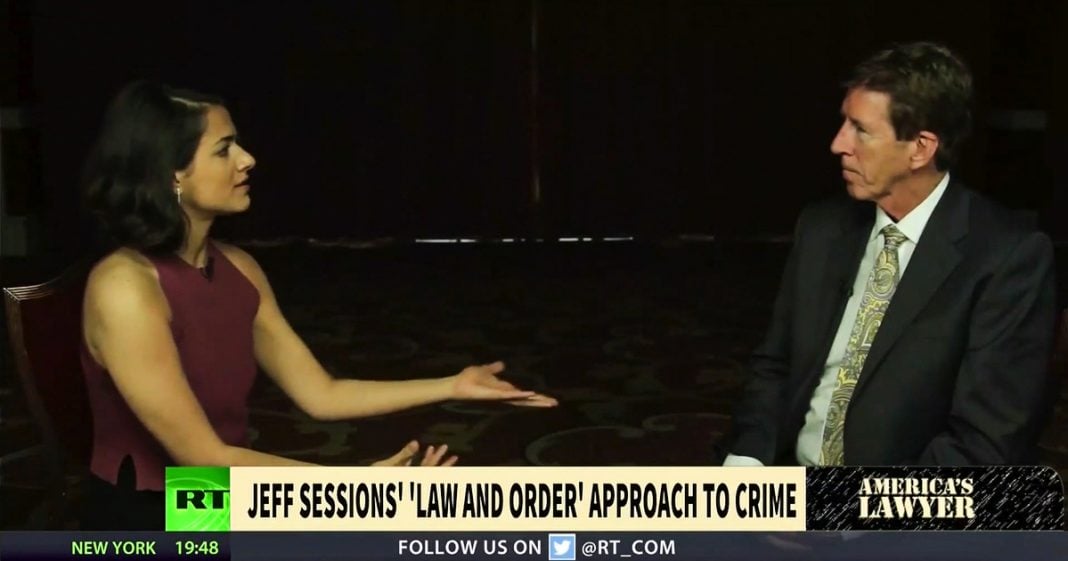 Papantonio: Attorney General Jeff Sessions raised eyebrows last month with his comments on police reform. According to Sessions, the agreements between the federal government and many cities across America to reform corrupt and dysfunctional police departments are reducing the morale of police officers and leading to an increase in crime. As a result, the Justice Department has ordered a review of all consent decrees reached during the Obama administration to examine whether these pacts are undermining the Trump administration’s goal of fighting violent crime.

RT America’s correspondent Anya Parampil sat down with Mark O’Mara to discuss his views on this issue. Take a look.

Anya: Attorney General Jeff Sessions announced a major review of all existing or contemplated police consent decrees. Can you explain for viewers what exactly that even means?

O’Mara: Sure. When there is a problem with a police agency … Discriminatory practices, failure to properly deal with there community … Then there is a possibility that the Department of Justice will come in, look at the police department, look at the frailties of it, and then say, ‘We’re going to help you fix it.’ That ‘we’re going to help you fix it’ is somewhat voluntary. They enter into what is called a consent decree, which says as long as you do these things, and fix your problems, then we’ll leave you alone. That really is what consent decree itself is.

Anya: It sounds almost so basic in itself. It’s not even that overbearing. It’s not as if the federal government is coming in and exercising extreme control over these departments as is.

O’Mara: No, at that point it really is advice and some input. Certainly, they may help them with increasing their diversity within their police department. Like you only have 3% of blacks or minorities. You should have 30%. Let’s get it up to 10 or 15. That type of stuff.

Anya: In making this announcement, Sessions actually said that consent decrees increase crime. Is that true?

O’Mara: I don’t understand what his basis for that would be. A consent decree occurs when the Department of Justice looks at something and says, ‘This is bad enough where it needs some federal oversight.’ Granted, Attorney General Sessions’ perspective, the administration’s perspective, seems to be get the federal government out of everything they can, and that includes law enforcement, which, generally speaking, I’m okay with local agencies and local governments governing themselves, but when it becomes a problem, just like with Board of Education back in the days of Brown v. Board of Education, when there are problems that the federal government has to step in, then they should have the authority to do so.

Anya: Another major announcement Sessions made recently, one of many … It seems that there have been endless policy changes daily coming out from Sessions. He was on the border and announced that he directed prosecutors to charge undocumented immigrants caught crossing into the country unlawfully for a second time with felonies. How has the Trump administration changed the definition of what it means to be criminal?

O’Mara: The problem that we have is we have federal laws that exist. I wouldn’t even call it a problem. We have federal laws that exist that allow for strict immigration enforcement. He didn’t create a new law by saying second time in is a felony, but the reality is most of those people who are coming across, most, are coming from the southern border and they’re coming here generally for decent reasons. They’re coming here to work. They’re coming here for a better life, and I understand that they are violating immigration law. But the idea of further criminalizing an event that is based, generally speaking, on poverty and need doesn’t seem to make sense. If you want to have a stricter border control, let’s do that, but we don’t need more created felons. It’s just a way to, in my opinion, be less sensitive to the realities that we have to deal with rather than more sensitive.

Anya: What do you do in a situation like with our immigration laws? As a lawyer, you’re sitting here saying that they are basically impossible to enforce, and that’s what we hear. What do you do when the law doesn’t match with reality and the situation that we have in the country? The administration can come forward and say, ‘Well, we’re just enforcing law here.’

Anya: We’re already seeing in the administration’s attempt to enforce some of these laws local revolt, especially in the case of sanctuary cities, I would say, is an example of cities saying, ‘Well, we’re going to make this decision, even if the administration is coming in and saying that we have to enforce these laws.’

O’Mara: Again, it’s a difficult razor’s edge because those sanctuary cities are getting some federal funding. We all know that purse strings help maneuver behavior, but the idea that the administration is going to walk in and say ‘You won’t have money for roads,’ or ‘You won’t have money for this because you, as a local government, have decided that you’re going to spend your police dollars on other matters than enforcing federal law.’ It’s a little bit, not only antagonistic between the two, but senseless.

Anya: Finally, looking back at the first day of the Trump administration, remembering Trump’s inauguration speech, something that stuck out to me was when he said ‘We’re living in an era of American carnage.’ That phrase … To hear a president say that in an inauguration speech was insane, but then he said that we were going to respond to this era by creating a law and order society. Judging from the first 100 days of this administration, what do you think that society is going to look like?

O’Mara: First of all, I’m not sure what he meant by carnage because I’ve done criminal defense for 35 years and I know it, quite honestly, better than most. I also know that violent crime is generally down in this country. We still prosecute people for crimes that we probably don’t need to, but generally speaking, crime is down. I don’t get the era of carnage to begin with, but, since that is a premise from now the most powerful man in the universe and leader of the free world, if that is his perspective and the response to that is law and order, I’m very troubled because I’m very troubled by an administration that is going to say to us ‘We are in such dire straits, virtual national emergency, that we’re going to have to react to it.’ Quite honestly, those are the same words said by people in the past that have led us into martial law. I’m very concerned. We have problems with crime in America still. It’s not perfect, but there are much better ways to deal with it than consider it carnage.

Anya: It sounds like the Trump administration’s solution so far is to put all this decision-making in the hands of police themselves at least.

O’Mara: That is a problem. I represent police officers. I like police officers. They do a great job. I would not want to risk my life every day protecting us from ourselves, which is what cops do, but systemically, we have problems with law enforcement. Implicit bias exists and it exists within police departments, and they need to be better trained for community policing and how to interact properly and more collaboratively with the community rather than this law and order, because that doesn’t work. The cops are here to help, let’s let them help, not become militia.

Anya: Mark O’Mara. Thank you for your time this afternoon.

O’Mara: Great to be here.