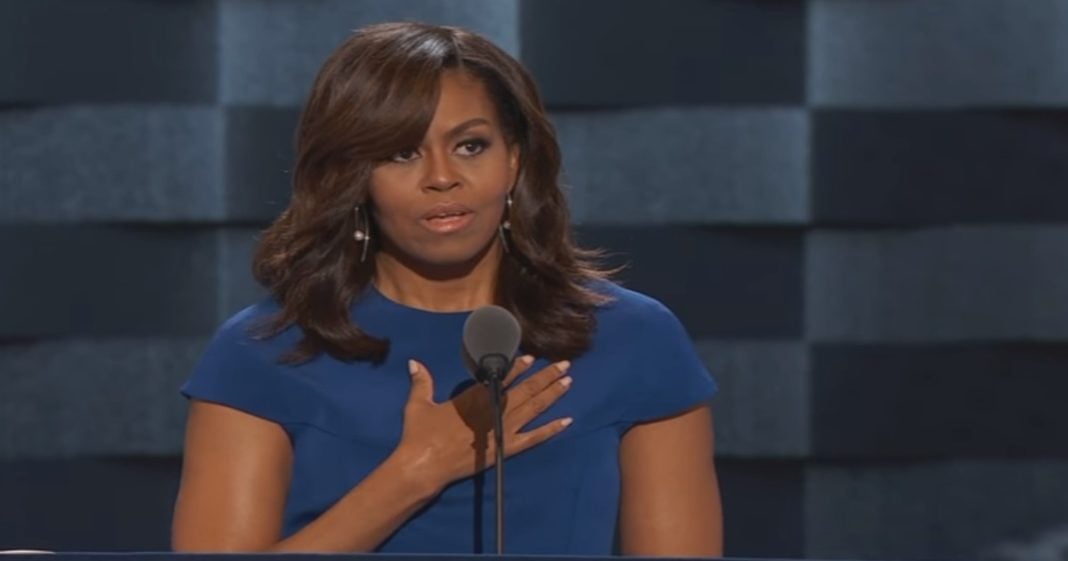 While Barack Obama’s return to the public eye has been largely without waves, Michelle Obama rocked the boat a bit during a Partnership for a Healthier America summit when she became visibly upset at recent rollbacks surrounding school lunches and restaurant food labeling.

This includes not only the first lady’s healthy school lunch initiative, but also Obama-era regulations which calls on restaurants to clearly label their food’s nutritional facts like calories and ingredients. Simply, Mrs. Obama argues, this administration doesn’t care about you or your children, and they’re showing it all the time.

“This is where you really have to look at motives, you know. You have to stop and think: why don’t you want our kids to have good food at school? What is wrong with you?”

Mrs. Obama was referring first to a decision by the Trump administration to revoke the oft-mocked school lunch initiative put into place by the first lady.

“And why is that a partisan issue? Why would that be political? What is going on? You know, now that’s up to moms. Moms, think about this. I don’t care what state you live in. Take me out of the equation. Like me, don’t like me, but think about why someone is OK with your kids eating crap. Why would you celebrate that? Why would you sit idly and be OK with that?

“Because here’s the secret: if somebody is doing that, they don’t care about your kid, and we need to demand everyone to care deeply about kids. That’s all we have. So we should be driving this and every elected official on this planet should understand: don’t play with our children. Don’t do it.”

But the issue isn’t just about her own personal project involving school lunches. No, Mrs. Obama’s frustration reached further, into a grander picture about consumers’ rights and transparency.

“We need to look our neighbors in the eye and kind of go: ‘What is going on?’ Because this just isn’t that complicated, you know. Just tell me what’s in my food. Why is that a problem? So you have to ask yourself, what’s going on, because I don’t get it. I don’t understand it.”

As the Obamas were readying themselves to leave the White House, many called on the First Lady to make her own political run, a call that Michelle readily ignored. Seeing her fired up and caring so much about American families brings those same yearnings to the surface again.