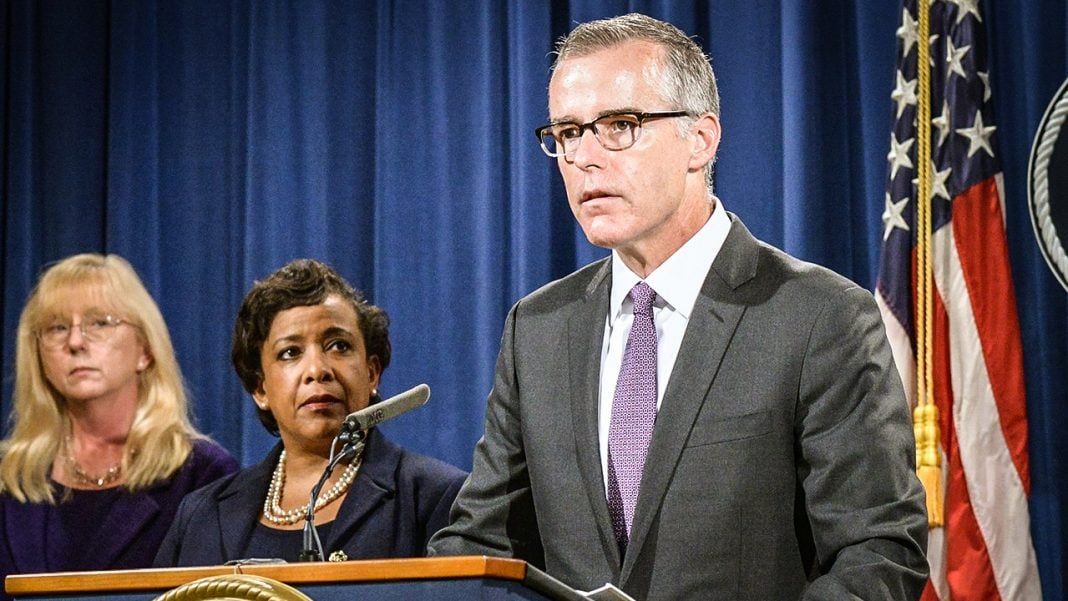 Andrew McCabe, the man who will be running the FBI until Donald Trump names a replacement, is currently under investigation for his political ties to the Clinton campaign and other Democratic campaigns that he was supposed to be investigating.  Is there anyone in DC that we can trust anymore? Couldn’t we get someone that isn’t currently under investigation or possibly doesn’t have a conflict of interest to do this job? Ring of Fire’s Farron Cousins discusses this.

Andrew McCabe is the man who is currently acting as the Director of the FBI in the interim between the firing of James Comey and from whenever Trump decide to put a new person in there. Here’s the problem with Andrew McCabe. He is currently under investigation because his wife took money from Clinton ally, Terry McAuliffe, while she was running for office in Virginia. Now, not such a big deal, right? I mean, you know, he was part of the group that had to investigate Hillary Clinton, but here he is taking money from her friends at the DNC. His wife was, at least. To his credit, he did let the people at the FBI know this before he was given the promotion that he’s been given. But the fact of the matter is that this man, who’s currently acting as the Director of the FBI, is under investigation for potential conflicts of interest because of the money his wife received from McAuliffe.

The problem I have with this is why in the hell can we not find someone in Washington, D.C., someone in the FBI to act as Director, who’s not under investigation or currently facing some kind of conflict of interest. That’s the problem with what’s happening in Washington, D.C. Unfortunately, it’s not a problem that only affects the Republicans because, clearly, it affects the Democrats as well. Is there anyone left? I mean, anyone in D.C. that’s still pure? Or has anyone who’s ever gotten any kind of position within the federal government just become corrupt upon walking through the door? Constant conflicts of interest, constant investigations, and that’s all we’re getting.

Now, what McCabe did here, again, he did disclose this but they’re still investigating because they’re not sure he disclosed everything, he thought maybe he was doing the right thing or maybe he was trying to hide something. It doesn’t matter. The man is still under investigation, just like we’ve got other investigations going on all throughout the damn government at this point. Isn’t there somebody we could pick to maybe show that the government isn’t this collapsing, disgusting, corrupt center of the country? Anyone? I mean, hell, pull somebody off the street if you have to. They’re only going to have this job for a couple of days. That is, until Donald Trump decides to put Rudy Giuliani or that Fox News sheriff or, hell, maybe even George Zimmerman as Director of the FBI. God knows who Trumps going to appoint, but we know it’s going to be somebody horrible. But in that meantime, was there no one at the agency that wasn’t under investigation? Nobody at that agency that didn’t have some kind of conflict of interest?

You’re not showing the American public a hell of a lot of hope at this point. When we get rid of one guy because he screwed over Hillary and was investigating Donald Trump, and replace him with another guy who took money from Hillary’s friend, who’s also currently under investigation, it’s a whole frigging tangled web of disgustingness right now in Washington, D.C.

To be honest, I don’t see a cure for it in the near future. I don’t see a non-corrupt person coming out and taking the lead, saying, “Whoa. Okay. The agencies right now are really screwed up. We’ve got to get in here, weed these people out, replace them with honest, decent people, and then maybe move forward.” No, I’m not talking about the House and the Senate. I know we’ve got a couple of good senators. We got a few good people in the House. I’m talking about within these agencies. I mean, for the love of God, everybody that Trump has come in contact with, Democrat or Republican, ends up under some kind of investigation. Is there no one left in D.C. that we can trust at this point? Because, honestly, I don’t think that there is.