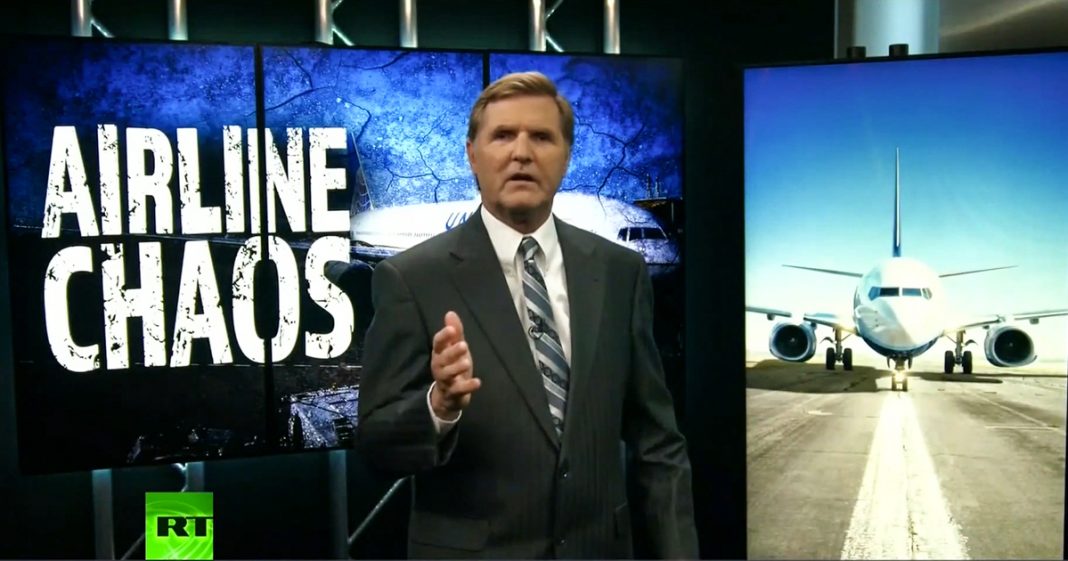 Via America’s Lawyer: Mike Papantonio discusses how deregulation has allowed airlines to consolidate power over customers and speaks with attorney, Dan Soloway, about the infamous United Airlines video showing a passenger being forcibly dragged off the plane.

Papantonio: By now most people are familiar with the story of Dr David Dao. You’ve seen the video of him being forcibly removed from a United Airlines flight, his face bloodied from the encounter, all because he refused to be a volunteer as the airline likes to put it, to give up his seat for a United employee. Just a few weeks ago, before this incident, two young women were denied entry onto a United Airlines flight because they were wearing leggings. Stories of people being denied entry to onboard an aircraft are all too common. The Dr Dao situation was especially appalling, due to the fact that he was violently removed from an airplane that he had already boarded, and this is typically reserved for people who pose a threat to the safety of other passengers.

But here’s the uglier side of the story. Most people don’t realize this part, and that is that the airline industry is set up in such a way that they can remove anyone, anytime, for virtually any reason. According to Airlines Contract of Carriage, a document that’s several dozen pages long, and typically about 40,000 words, the airline has ultimate authority to prevent you from boarding a plane for anything ranging from how you’re dressed to a lack of personal hygiene. When you buy your airline ticket, you’re essentially signing an agreement saying that you accept these terms and you’re going to abide by those terms.

The story really begins in the late 1970s when the airline industry was able to convince Congress and former President Jimmy Carter to deregulate their industry, under the guise that deregulation would lead to lower ticket prices. In fact, the bill Carter signed into law in 1978 was literally called the “Airline Deregulation Act,” and while ticket prices did decline over the next few decades, the Government Accountability Office found in a 2006 study that it’s not clear if deregulation or other factors such as technology improvements are the reason why. After the Deregulation Act was passed, authority to regulate airlines shifted mostly to the industry itself, with federal laws covering only a few simple items related to air travel.

For example, the no smoking laws for airlines are from the federal government, and the government supposedly makes sure that the airlines don’t engage in deceptive practices or fraud, but that’s about the extent to which they interfere with business of airlines. When it comes to denying admission or raising prices or even reducing the width of a seat, those decisions are decisions the industry makes themselves. But one of the biggest gifts that the airline got from deregulation was that they were able to buy and bully small airlines out of business. Since the 1950s, more than 150 airlines have sought bankruptcy protection or gone out of business.

As a result, we’ve gone from 10 airlines controlling 90% of the market to just four major airlines that now control 85% of all air travel in the US, according to 2013 figures. When you hear people talking about boycotting United Airlines over their behavior, you have to understand that in many instances, that simply isn’t an option. The airlines have made it to where they can have the monopoly on air travel and there’s nothing we can do about it until Congress acts. For more on airline deregulation, I’m joined now by attorney Dan Soloway. Dan, let’s start with United. Can you tell us exactly what happened in this recent incident? What went on there?

Soloway: Sure, Mike. Dr David Dao is a 69 year old Vietnamese American. He’s a medical doctor practicing internal medicine. He’s a father, he’s a grandfather. In fact, four of his children are medical doctors as well. He lives about 40 miles South of Louisville and he boarded the United Airlines flight from Chicago’s O’Hare Airport to Louisville, in order to be there the next day to treat his patients. What happens is United didn’t oversell the flight, which is what we’re used to.

They in essence, had a sold out flight, but what they did is they learned that they had to accommodate four crew members who had no seats, and after everyone was boarded, they decided to kick people off. That is something that is allowed under the Contract of Carriage, that 40,000 document you mentioned, 40,000 words that say basically all the rights are with United and not with Dr Dao.

Papantonio: Lawyers for Dr Dao have said that they’re certain that they’re going to sue the airlines. How strong of a case does he have? You’ve been handling cases against the biggest corporations in the world for so long. How do you evaluate his case?

Soloway: I think we have a very strong case. The lawyer who represents him can argue two things. One, that United had the right to remove somebody, but not with excessive and violent means. The other is, of course, they utilized the services of the Chicago Police who used excessive force. The breach of the duty is not that they didn’t have a right to kick him off, but they had to use reasonable means, nonviolent means, and they went beyond that, they injured him, they caused a concussion, two broken teeth, a broken nose, and septum problems that are going to require surgery. They injured him badly by body slamming him, by bloodying him, by dragging him off the flight to the horror of the passengers.

Papantonio: Let me ask you this. This story really begins in the 1970s with the deregulation of the airlines. Tell us how deregulation has put us in this situation that we’re in? By the way, I’ve talked about Jimmy Carter signing this and Ronald Reagan made it worse, and then of all people, Bill Clinton made it even worse as far as deregulation. What’s your take on the deregulation story?

Soloway: Deregulation removed the Civil Aeronautics Board from controlling airlines and while they gave them a fair profit, they had problems with routes and things of that nature. They were a little slow. In came the deregulation folks, and since then, while the airlines control the routes and the fares and all that, what they’ve done is totally destroyed any services that were once wonderful for the passengers. Now the passengers have absolutely no rights. They’re allowed to reduce the size of the seats and the legroom, and then say if you don’t fit in that seat, you’re not allowed in. They’re allowed you to kick you off if they don’t like how you act, how you dress, how you smell. If the alcohol content goes above what they think is appropriate, they have all the rights and the passengers have no rights at all, other than a cap on the damage they can recover if you’re bumped from a flight.

There, you get the maximum of $1350. What you don’t get is your real damages. You don’t get the right to go to court, and if you miss something, if you lose your job because of their desire to bump you off, you don’t get any remedy. You get what they say you deserve, which is very little. In addition, we’ve seen the deregulation result in baggage fees …

Papantonio: Dan I think if people actually read this, they’d be pretty horrified to see what this Contract of Carriage actually means. When you read the details of what it talks about, who in their right mind would ever say, “Yeah, this is good. I’m going to allow arbitration,” which as we know, the arbitration clause simply allows the airline to pack a panel, usually three members in arbitration panel, pack that panel with two people they’re directly somehow connected to the industry, and then you have the airline deciding on behalf of themselves. This arbitration clause, we really can’t do much about it if we want to fly. Doesn’t this have to be handled congressionally if we’re going to get away from this whole scam that’s called arbitration?

Soloway: Well, you are exactly right. These are contracts of adhesion. There’s no bargaining power. The airlines are in a superior position, you take what they give you, or you don’t fly, and that’s it. They don’t guarantee anything. They guarantee their best effort, as they define it. Even worse, when they decide to bump somebody, you have to deal with almost an arbitrarian, capricious decision on their part. Who are they going to bump? Why are they going to bump you? The only ones who have some measure of argument there in the ticket are people who are disabled or unaccompanied minors. Other than that, if they want to bump you, and put somebody who has a more elite status under their frequent flier program, they can do it.

Put another way, they can play favorites, they can be arbitrary, and you have absolutely no rights whatsoever. It is a contract of adhesion, and you have no court right to get actual damages for what you lose. It’s not fair.

Papantonio: I think you hit it on the head. It is arbitrary. The law is what they determine the law is, and all of your rights simply are out the door. I think the American public is looking for a quick answer here, saying, “Gee whiz, the airlines will react. The airlines will change.” The truth is, airlines like monopolies. The idea they like to have these monopolies where they can call all the shots. That’s one reason you have these hubs, as you know, and you’ve seen this developing all across the country, where you have these hubs across the country that you have to fly into before you can make your connecting flight.

That’s part of the scam. We have to take you to Atlanta before you can go to Topeka, and that extra cost rather than going directly from where you are to Topeka, the way they used to run things. Right now, the airline industry is completely in control. Quickly, got about a minute. What should passengers know how to protect themselves, quickly? What is your take on all this, Dan?

Soloway: If they’re bumped off a flight they’re entitled to four times the one way fear, or $1300. Unfortunately, it’s whichever is less. Second, don’t accept vouchers. Demand cash. Vouchers have stipulations, restrictions, and that’s what they want you to take. Don’t take it. And you can demand it right after they bump you. If they delay more than two hours, you have a right to a similar thing. You can get four times the cost of a one way ticket. You can demand all these things. Above all else, if you refuse to get bumped and they use violent means, get to an attorney immediately. They are not allowed to use force to bump you from the flight. It seems ridiculous that they would do this in a moneymaking enterprise when they would have such terrible publicity, but they will do dumb things in order to use their arbitrariness and get you off the flight.

Papantonio: Dan, thank you. I appreciate it. Thanks for joining me.