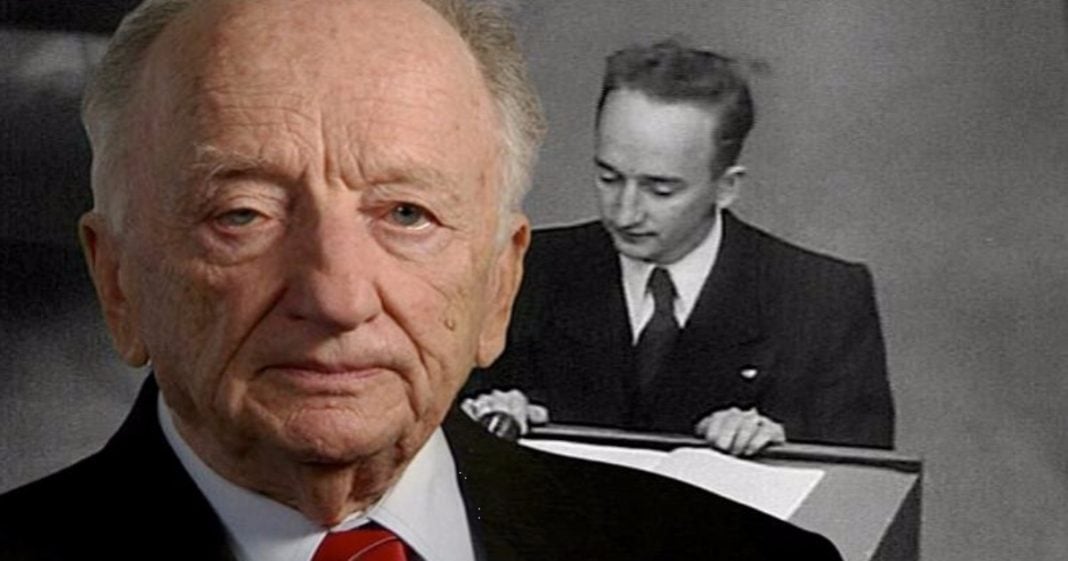 At the age of 97, Romanian-born American lawyer Benjamin Ferencz has seen a great deal – including the worst of humanity. Today, with the rise of right-wing extremism around the world, virulent racism, capitalism run amok and religious fundamentalism of all stripes, it’s easy to lose heart.  However, in a recent interview on CBS “60 Minutes,” Ferencz shared some perspective that helps us realize that as grim as things are now, they have been far worse – yet the world has survived (and even thrived).

Ferencz was born in the Transylvania region of present-day Romania in 1920. His family fled  to the U.S. when the Romanian government began persecutions of Jews and eventually settled in New York City. A true American success story, Ferencz went on to graduate from Harvard Law School with a degree in criminal law in 1943. Afterward, like many young men during the Second World War, he signed up for military duty, initially serving with an artillery unit. However, the Army eventually determined that his true skills and talents were going to waste in that position.

In 1945, he was assigned to a unit tasked with collecting evidence of war crimes. His assignments took him to the Third Reich’s infamous “death camps,” where he saw firsthand the results of Hitler’s “Final Solution” –  which included revenge by surviving victims. In a Washington Post interview sixty years later, he recalled seeing displaced persons beat an SS officer, strap him to a gurney, put him into an oven used for cremations and burn him alive. He admitted that he could have stopped it – but was “not inclined to do so.” He added, “Someone who was not there could never really grasp how unreal the situation was.”

Eventually, Ferencz went on to become a prosecutor at the Nuremberg Trials, the postwar tribunal in which Nazi war criminals were brought to justice. Years later, he went to work for the International Criminal Court (ICC), where he spent the remainder of his career. He has been outspoken on war crimes committed by despots like Saddam Hussein and Thomas Lubanga Dyilo. However, he has also called for the prosecution of George W. Bush for illegally starting the Iraq War.

In 2011, following the killing of Osama bin-Laden under the Obama Administration, Ferencz wrote a letter to the New York Times criticizing the action, arguing that “illegal and unwarranted execution – even of mass murderers – undermines democracy.” He has said – and rightly so – that “use of armed force to obtain a political goal should be condemned as an international and a national crime,”  and that the law should apply equally to everyone, even U.S. leaders.

Today, despite having seen and experienced horrors most of us cannot even imagine, Ferencz continues to maintain an optimistic outlook. Echoing a quote attributed to Athenian general and statesman Pericles, Ferencz  acknowledges that “war makes murderers out of otherwise decent people…all wars, and all decent people.” And yet, he reminds us that as bad as things have been, and despite the backsliding into fascism that appears to be happening around the globe, the course of human social evolution has been generally in an upward and forward direction.

In his interview with Leslie Stahl, he said,

“The progress has been remarkable. Look at the emancipation of woman in my lifetime. You’re sitting here as a female. Look what’s happened to the same-sex marriages. To tell somebody a man can become a woman, a woman can become a man, and a man can marry a man, they would have said, ‘You’re crazy.’ But it’s a reality today. So the world is changing. And you shouldn’t…be despairing because it’s never happened before.”