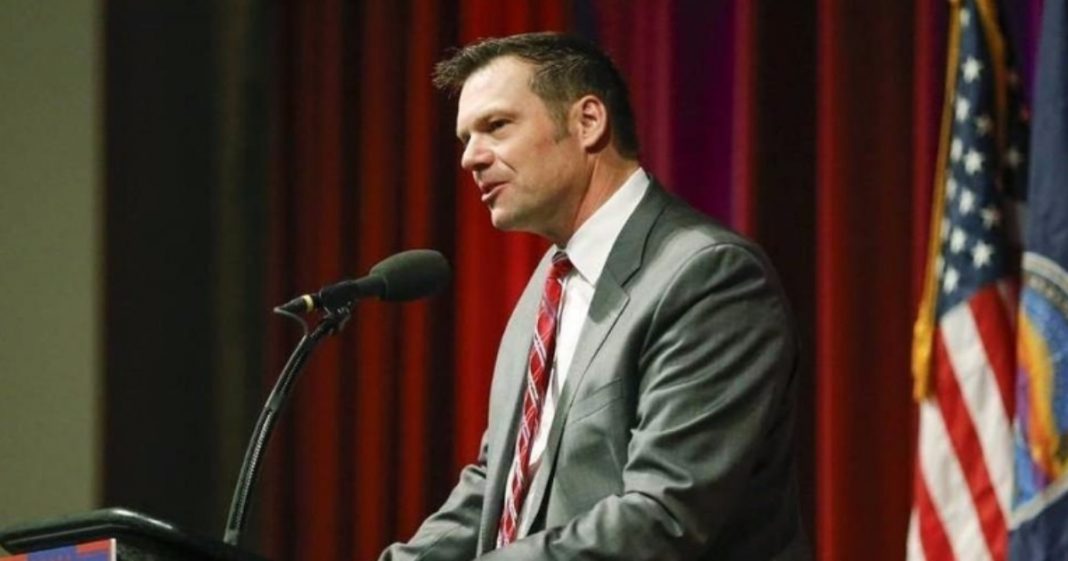 President Donald Trump is set to sign an executive order on Thursday in order to establish a commission to review and investigate current election laws in order to look into voter fraud and voter suppression.

While Trump is hoping the second part about suppression will be enough to please Democrats, already we are seeing that the commission is yet another anti-minority witch hunt intent on establishing more precedent for more extreme voting laws which disenfranchise low-income and minority voters.

The most flagrant evidence of this nefarious intent is the man who is being appointed to head the commission: a rabid anti-immigration advocate who has authored several anti-immigrant bills across the nation.

But though Kobach has been instrumental in a wave of anti-immigration legislation, he claims that he is not at fault for their outcomes. The law expert claims that he is not the author of the bills, but rather is brought in after the bill is constructed in order to clarify and clean up the language.

From a Mother Jones profile on Kobach:

“[A]dvocates on both sides of the immigration debate agree that Kobach’s influence has been far-reaching. Rosemary Jenks of NumbersUSA, an anti-immigration group, calls Kobach “instrumental in helping states and localities deal with the federal government’s authority.” Vivek Malhotra, a lawyer who worked for the American Civil Liberties Union when it tussled with Kobach in court, says, “What Kris Kobach has done as a lawyer is really gone out to localities around the country and really used them as experimental laboratories for pushing questionable legal theories about how far states and local governments can go.”

But outside of his direct role in drafting anti-immigration legislation, Kobach has remained in the public eye thanks to his controversial views on voting rights and immigration as a whole. Kobach believes that one strategy of eliminating undocumented immigrants is to make life so hard for them in the U.S. that they “self-deport.”

Kobach has also argued that one should have to show their birth certificate at the polls in order to be allowed to vote. He also spoke at a White Nationalist conference, because that’s an unspoken prerequisite of working for the Trump administration.

Finally, as Secretary of State in kansas, Kobach has engaged in his own personal suppression of voters in the state, creating a two-tiered system of registration in order to complicate the voting process. the system was so flawed that a state judge put an end to it.

This is yet another instance of not being able to take the President at his word – while the EO may claim to care about voter suppression, with Kobach at the help, one can be assured that the only thing he will be investigating is how to keep minorities and low-income voters as far away from the polls as possible.