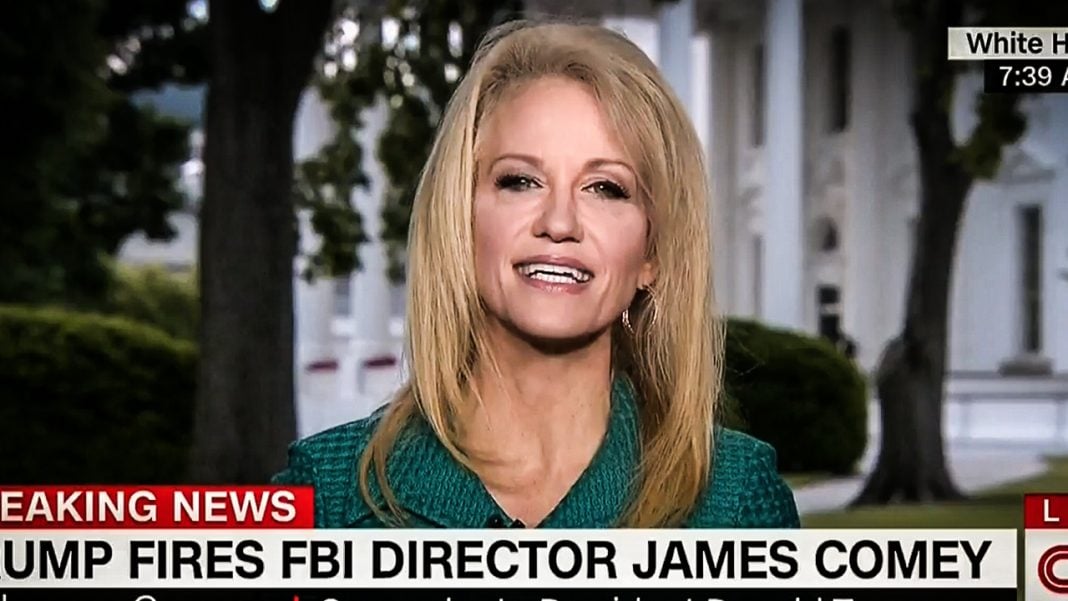 After news broke that Donald Trump had fired FBI director James Comey, Kellyanne Conway took to the airwaves to explain to CNN that it is completely inappropriate for their network – or any reporter – to question the timing of Comey’s firing, and that the president is essentially free to do whatever he wants. Ring of Fire’s Farron Cousins discusses this.

Farron: Immediately after Donald Trump fired James Comey as the FBI director, Kellyanne Conway, a counselor to the president, decided to go on media and go ahead and put out all the fires that Donald Trump has caused, and judge for yourself on whether or not she did a good job. Take a look.

Cuomo: I get the talking point on this, but let’s be very clear. Everybody who-

Conway: It’s not a talking point. It’s a seven-month distraction.

Conway: It’s not a talking point.

Cuomo: That’s what you want it to be, I get that, but anybody who has been around-

Conway: No, you want it to be real.

Cuomo: No. Look, what I want is the truth, that’s all we should all want here.

Cuomo: You’ve been misrepresenting … The White House … What James Clapper said when he said he had seen “No collusion proof,” that’s accurate. He also said, it’s because he “Didn’t know anything about the investigation.” Comey had been quiet about it. He wasn’t privy to the record. He doesn’t know the facts.

See, that’s very different. You don’t like that part because you want, as the President says, for this to be “A hoax.” I get it, and that’s why Comey being ousted, just when that is heating up, not back when he started his tenure, he didn’t need anybody to tell him that Comey had been divisive within the agency.

Cuomo: He knew all that.

Conway: Do you want me to ask the questions? Because you’re giving all the answers.

Cuomo: Kellyanne, I’ve got to check what you saying.

Cuomo: I’ve got to provide the context for it.

Conway: Well, this will go-

Cuomo: Because you’re creating an image that doesn’t reveal itself in fact.

Conway: Let me know when I can answer.

Cuomo: Knock yourself out.

Conway: Well, I’m going to knock this out-of-the-park by telling you that I’m sure it will go viral now that you’ve used the words “Naïve” and “Deceptive.” People think you used those words about me, although you were talking about a state of mind, I’m sure.

Cuomo: I’m talking about this narrative coming out of the White House.

Cuomo: Why move on it so quickly? Why do it now?

Conway: Okay, let me ask you the question: Why not? Is it too quick for people? Did it catch the wrong people flat-footed?

Cuomo: Because you’re being investigated by the FBI and that is what’s in the air.

Conway: Which is a big place-

Conway: No, I’m not being investigated by the FBI-

Cuomo: You’ve let everybody know you think it’s a hoax-

Conway: And the President is not being investigated by the FBI.

Cuomo: And that you don’t like that it’s happening.

Conway: You know, you want to question the timing of when he fires, when he hires, it’s inappropriate. He’ll do it when he wants to. Just like he fired FBI Director Comey when he was faced with evidence.

You see, Kellyanne, the actions of a sitting president have effects all over the country. To be honest, beyond our own borders, all over the world. Yeah, we kind of have to hold them accountable. We kind of need answers about things, and we need more honest answers than just, “Oh, well, he didn’t like the way he handled the Hillary Clinton email thing.” As if Donald Trump is suddenly some kind of hero, sticking up for poor old Hillary Clinton. That’s a total lie, and you know it Kellyanne. That’s why you kept bouncing around on what you actually gave as the reason for Comey’s firing.

Kellyanne is out there for a specific reason … And Chris Cuomo’s show is not the only one that she went on after the firing … She is out there to be the distraction, to be the useful idiot, to get attention away from Donald Trump. That’s what she always does, it’s what she does best, it’s probably the only thing she does well. Reporters know, the media knows, the Trump administration knows Kellyanne Conway is going to go out there, say something incredibly stupid and that’s going to distract people. Well, not this time, though.

There are plenty of people out there going after Kellyanne Conway. In fact, the people interviewing her didn’t let her get away with this nonsense. They understand, now, how to deal with a bully administration, like we have with Donald Trump, and that is to keep fighting back, to keep asking the questions and to not give up.

They can parade Kellyanne Conway out there in the media all they want. It’s not going to distract us, and it sure as hell isn’t going to stop us from asking the questions to which the American public deserves answers; and there is nothing inappropriate about that.