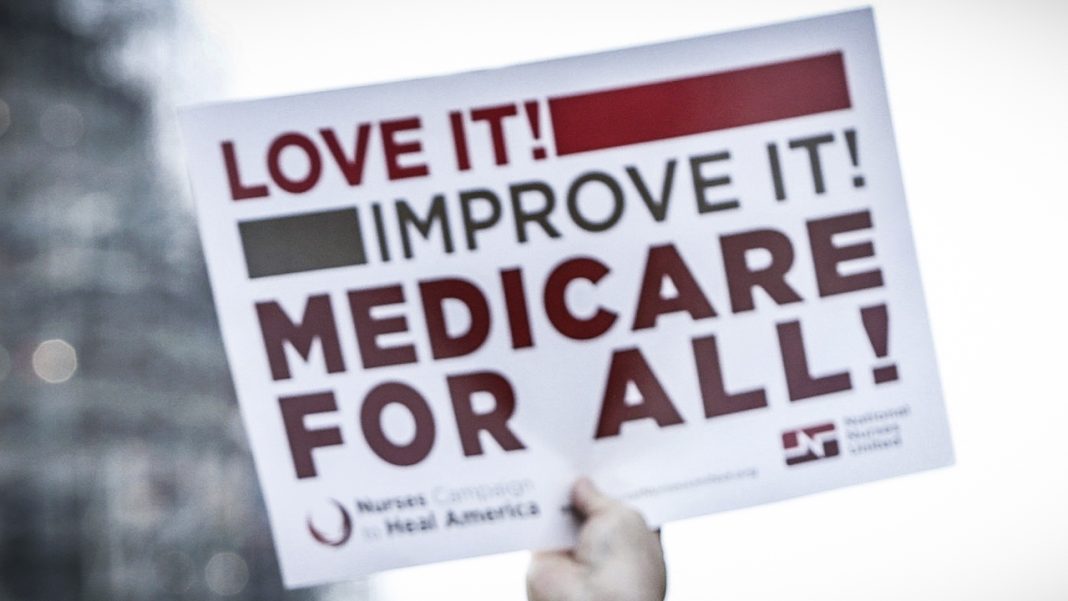 Democratic Senator Chris Murphy issued a warning to the GOP: If you pass your disastrous healthcare bill, you’ll lose your power and then we, the Democrats, will be ready to push legislation granting Medicare for All.  The only question is whether the Democrats can maintain this anger and momentum for another 18 months until we hit the midterms. Ring of Fire’s Farron Cousins discusses this.


Transcript of the video:

Democratic, Chris Murphy, from Connecticut, issued a strong warning to the Republican party in a recent interview with New Republics, Brian Beutler, where he said, “If you enact this disaster of a health care bill that you think you’re going to enact, then the Democrats are going to end up pushing for Medicare for all.”

Now, on the surface, ti would appear from this generic statement, that Chris Murphy is simply using Medicare for all, as a threat. Like, if you do this, we’re gonna do this. But, that’s not actually what he meant.

At first, when I saw that, I was a little angry, I said, “Why not just do that?” But, read further.

Chris Murphy was talking about the fact that if Republicans go forward with their healthcare bill, which they’re planning to, it’s going to cost them the 2018 mid-terms. And, when the Democrats regain power, this is what Chris Murphy was talking about, then they immediately are going to push a Medicare for all bill. He’s basically warning the Republicans, you’re about to commit political suicide and once you do that, everything you’ve built will be destroyed and we’ll finally have a functioning country again.

Now, he may not have obviously said those words, and he may not have expressed it as eloquently or as clearly as that, but that’s what he’s talking about. And to be honest, that really is the reality that Republicans are facing right now.

Approval for this American Healthcare Act, continues to drop by the day. Very few people actually support it. Less than 1/3 of the country still waiting on that CBO score, as of right now. And nobody wants it, they understand that 24 million people are very likely to be kicked off of their health insurance plan, forced into another high risk pool, where they will pay higher premiums that they can’t afford, so they simply won’t have insurance.

And, since the Trump administration, the Republicans have stripped the penalty for anybody that doesn’t get healthcare, that is not included in this bill, so the penalty would be gone. So, they have no reason to buy insurance if they don’t necessarily need it. They’re not gonna be penalized, so they could just go on without. And, it’s gonna be fine, until they get sick. Until they get into an accident or they get that horrible diagnosis that everybody dreads.

Then, suddenly, they’re gonna need it and they’re not gonna be able to get it. That’s the problem here. Republicans have designed a system that offers absolutely no penalties for people who don’t buy in, but makes it too expensive for them to be able to buy in, if they have any kind of pre-existing, like diabetes or asthma, or being a woman. And that’s the reality that the Republicans are faced with.

They’ve worked for six and a half, seven years to create this bill and they came up with, quite possibly, the worst piece of legislation imaginable. Chris Murphy understands that. The rest of the Democrats in the House and the Senate understand that. Unfortunately, at the moment, they don’t have the power to do anything about it.

So, they’re looking forward to 2018, because they know, if the public anger sustains itself, and if they, the Democrats can just keep this message alive, and come out with a more populous message. More populous legislation, then they will take back the House and they have the chance to gain more seats in the Senate. Not very many in the Senate, but enough.

And that’s what they’re looking forward to. But, at this point, it’s all on them. It’s all on people like Chris Murphy, because it’s one thing to capitalize on the public’s anger less than a week after the bill passed the House. It’s another to sustain it for another 18 months before we hit those 2018 mid-terms.