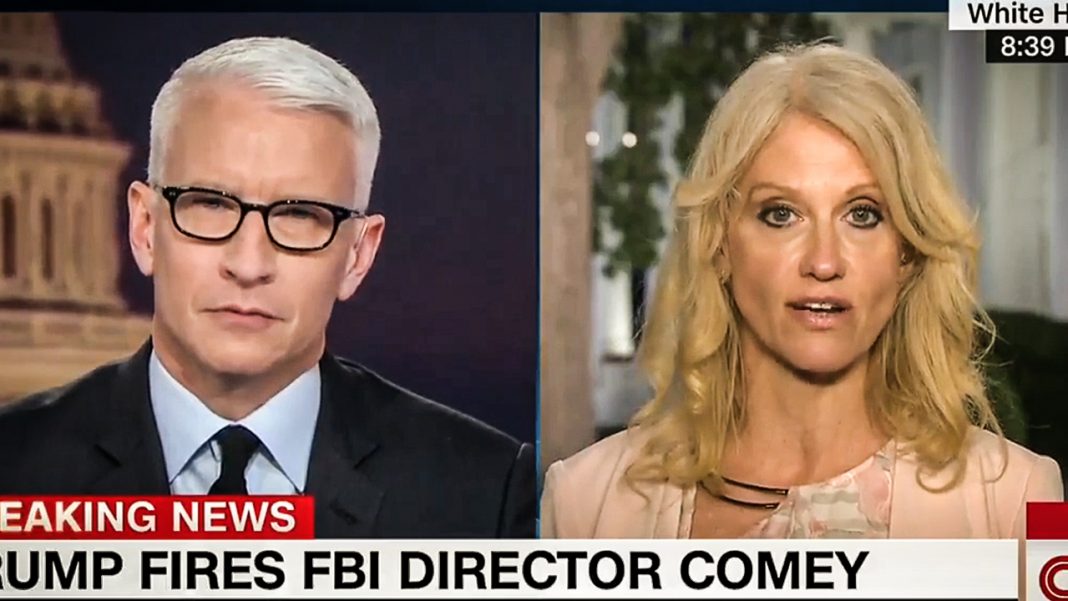 Anderson Cooper invited Kellyanne Conway on his show immediately after the firing of FBI director James Comey, and that was a decision that he regretted almost immediately.  Conway proceeded to lie her way through the interview, but Cooper was quick to point out every false statement that Conway tried to give. Ring of Fire’s Farron Cousins discusses this.

Farron: Kellyanne Conway is probably the best distraction that the Donald Trump administration can deploy. Shortly after they fired FBI director James Comey, Kellyanne Conway goes over to CNN, does a couple of interviews. She did one with Chris Cuomo that ended badly for her, but then she also sat down with Anderson Cooper who wasn’t about to take any of her nonsense during the segment. Take a look.

Kellyanne C.: No, it’s not all of a sudden, but there are many things covered in this letter. It goes to the fact that there’s a lack of morale that people are-

Anderson C.: The first thing is all about, that main, big paragraph-

Kellyanne C.: The first thing is all about the “FBI’s reputation and credibility.” It’s right in the first paragraph if we’re reading the same paragraph.

Anderson C.: The director was wrong to usurp the attorney. The third paragraph.

Kellyanne C.: That is true.

Anderson C.: To usurp the Attorney General’s authority on July 5th. Why now are you concerned about the Hillary Clinton email investigation when, as a candidate, Donald Trump was praising it from the campaign trail?

Kellyanne C.: I think you’re looking at the wrong set of facts here. In other words, you’re going back to the campaign. This man is the President of the United States. He acted decisively today. He took the recommendation of his deputy attorney general who oversees the FBI directory.

Anderson C.: That makes no sense.

Anderson C.: He said one thing as a candidate, and now he’s concerned as president.

Anderson C.: You want this to allegedly be about restoring confidence in the FBI-

Anderson C.: … but many people believe this doesn’t restore confidence in the FBI. In fact, a lot of people are raising questions, saying it destroys confidence in the FBI about whoever the president may appoint is now going to be in charge of an investigation into people who have been close to the President during the campaign. Any potential collusion with Russia.

Kellyanne C.: And today’s actions had zero to do with that.

Farron: You can find the full interview link in the description of this video. Here’s the thing about Kellyanne Conway, and I’m loving that some people in the media are finally taking her to task for it. This woman is almost incapable of telling the truth. It’s like she has some kind of mental defect to where her brain takes the truth, twists it into something else, and then spews it out of her hate filled mouth. Luckily, Anderson Cooper has learned a thing or two in the last few months, that you cannot just let this woman get on TV and say whatever the hell she wants to say, because it’s not going to be true.

Especially at a time like this, when everybody in this country, Republican and Democrat alike, want some answers. You’re not going to let that slide, you’re not going to let her get on there and give three different accounts as to why they fired FBI director James Comey. She couldn’t even keep her story straight in just a few minutes. It kept changing from one thing to another. She said this had nothing to do with the campaign, yet that’s literally what her boss said when he fired him. This woman is the most ill-informed person probably in the Trump administration. Maybe Sean Spicer has an edge on her. I don’t know.

I do know that it is finally refreshing and pleasant to see people like Anderson Cooper, like Chris Cuomo, hold her accountable for this and not just let her walk off the set after she finishes thinking that she fleeced the American public. When Kellyanne Conway finishes a TV interview, she needs to think, “Wow, I screwed up,” not, “Wow, I really got them,” and that’s how things all right going now. People are starting to hold her accountable. People are starting to call her out, and once that distraction that the Trump administration always sends out in the form of Kelleyanne Conway, once that crumbles, the administration will have nobody left to hide behind.

Trump Being Sued For Misusing Inaugural Funds At His Hotels

Trump’s White House Has Been 3 Years Of Pure Chaos