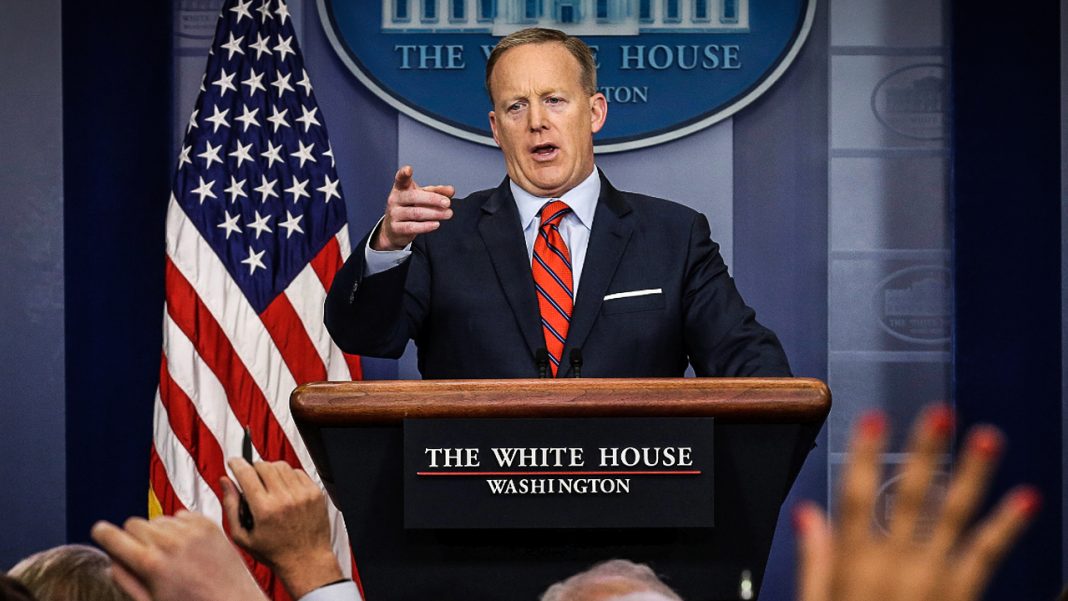 Sean Spicer told the White House press pool that it was actually former President Obama’s fault that Donald Trump hired Michael Flynn as his national security advisor, because even though Obama warned them about Flynn, they thought it was joking.  In the brain of a Republican, everything will always be Obama’s fault. Ring of Fire’s Farron Cousins discusses this.

Farron Cousins:
By now, I’m sure everybody’s familiar with Sally Yates’s testimony in front of the Senate with the new information that President Obama had warned Donald Trump against hiring Michael Flynn as his national security advisor, specifically on the grounds that Flynn is a guy who could easily be blackmailed by the Russians. Now, I tell you all of that because Sean Spicer, White House Press Secretary, yesterday told the press pool exactly how this whole Michael Flynn debacle even began. Take a look. It’s a longer clip, but you need to watch it all.

Kristen Welker: Sean, thank you. Former President Obama warned then President-elect Trump against hiring Mike Flynn as his national security advisor. Why did he ignore that warning?

Sean Spicer: Well, the president doesn’t disclose details of meetings that he has, which, in this case, was an hour-long meeting, but it’s true that President Obama made it known that he wasn’t exactly a fan of General Flynn’s, which, frankly, shouldn’t come as a surprise to anyone that, given that General Flynn had worked for President Obama, was an outspoken critic of President Obama’s shortcomings, specifically as it related to his lack of strategy confronting ISIS and other threats around that were facing America. The question that you have to ask yourself really is, if President Obama was truly concerned about General Flynn, why didn’t he suspend General Flynn’s security clearance, which they had just reapproved months earlier. Additionally, why did the Obama administration let Flynn go to Russia for a paid speaking engagement and receive a fee? There were steps that they could’ve taken if that was truly a concern, more than just a person that had bad blood.

Kristen Welker: I want to follow up on a couple points because you raised the security clearance, but before that, if a sitting president raises the name of one individual, why wouldn’t that give the president-elect pause? I understand what you’re saying, the caveat of the fact that he campaigned against Hillary Clinton, etc., but wouldn’t that give the incoming president pause?

Sean Spicer: Well, I don’t know that I agree with your characterization. You made it clear that he wasn’t a fan of his, and I don’t think that should’ve come as a surprise, considering the role that General Flynn played in the campaign, criticizing his-

Kristen Welker: It didn’t give him any pause at all?

Sean Spicer: No. Again, I think if you know what we knew at the time, which is that the security clearance that he had had been reapproved in April of that year, and not only did they reapprove it, but then they took no steps to suspend it. The question has to be what did they do if they had real concerns beyond just not liking him for some of the comments that he made.

Kristen Welker: It’s our understanding … and if you could clarify this … did Mike Flynn not need upgraded security clearance in order to serve as the national security advisor?

Sean Spicer: He had been the head of the Defense Intelligence Agency. That’s the same-

Kristen Welker: You vetted him, as well, correct?

Sean Spicer: That’s the same clearance that … The security clearance … We went over this a while ago. It’s the same clearance at any level. Once you get it, you get it. For the time that he had … He had had his reinvestigation in April of 2016, and the Obama administration took no steps … Not only did they reaffirm that security clearance, they took no steps to suspend it or take any other action.

Kristen Welker: Did you not vet him yourselves?

Farron Cousins: That’s right. In the mind of Sean Spicer and probably everyone else at the White House, and probably most Republicans, the whole Michael Flynn debacle, his ties to Russia, his compromised security, was all because of Barack Obama, the man who, 48 hours after the November election, warned Donald Trump to not hire Michael Flynn. Somehow it is all President Obama’s fault at this point. Now, some reports say that the White House actually thought that President Obama was just joking around about not hiring Michael Flynn. They thought he was joking. They didn’t know he was being serious at the time. Well, only a complete moron would think that a sitting president would joke with the incoming president about hiring somebody whose security might be compromised, but that’s what the Republicans are telling us. That’s what Sean Spicer tells us. That’s what Donald Trump tells us. Everything is Obama’s fault.

Now, we saw this in early 2009, back when Barack Obama first took office. Within his first month, Republicans were daily going on Fox News saying that no, no, no, this is Obama’s economy now. This is Obama’s economy. The fact that we’re still in a recession means that he’s failed and should be impeached. That’s what they were saying on Fox News less than a month into President Barack Obama’s first term. Now, any good thing that happened they were saying, well, that’s just remnants of George W. Bush trickling over there. All the bad stuff that Obama had no control over yet was all his fault still, and everything that happened for those eight years was Obama’s fault. Now everything that’s happening now that he’s off giving speeches to Wall Street is still somehow his fault.

Now, I was never a huge Barack Obama fan as a politician. I like him as a human being. I think he’s a very good man. I also understand that there are some things that he put in place that are still in effect today, namely the budget. Any gains that we see with the economy right now are a result of the Obama budget and financial policies. Trump doesn’t get to make one of those until about September, October. That’s when his goes into effect, and that’s when this truly becomes the Trump economy. Donald Trump cannot take credit for creating jobs right now. He can’t take credit for any economic upturns. Those are Obama’s gains.

Something as silly as this Michael Flynn sideshow, that’s all on you, Trump. You were warned several times by several people. You got Sally Yates going into the Senate making people like Ted Cruz look like whiny children, and you’re still fighting it. There’s going to come a time when the Trump administration is going to have to accept some responsibility for some of the horrible things that this administration has already done. Now, just because the time comes for it doesn’t mean they’re going to do it.

Eventually, we may see someone from the administration, probably someone we haven’t really heard from yet, take the blame for something, but I guarantee you it’s not going to be Trump. It won’t be Spicer. It won’t be Kellyanne Conway. It’ll be a fall guy. Then everybody will blame that guy or that woman for whatever horrible things the administration has done because God knows Donald Trump will never take the blame for being a piece of crap.