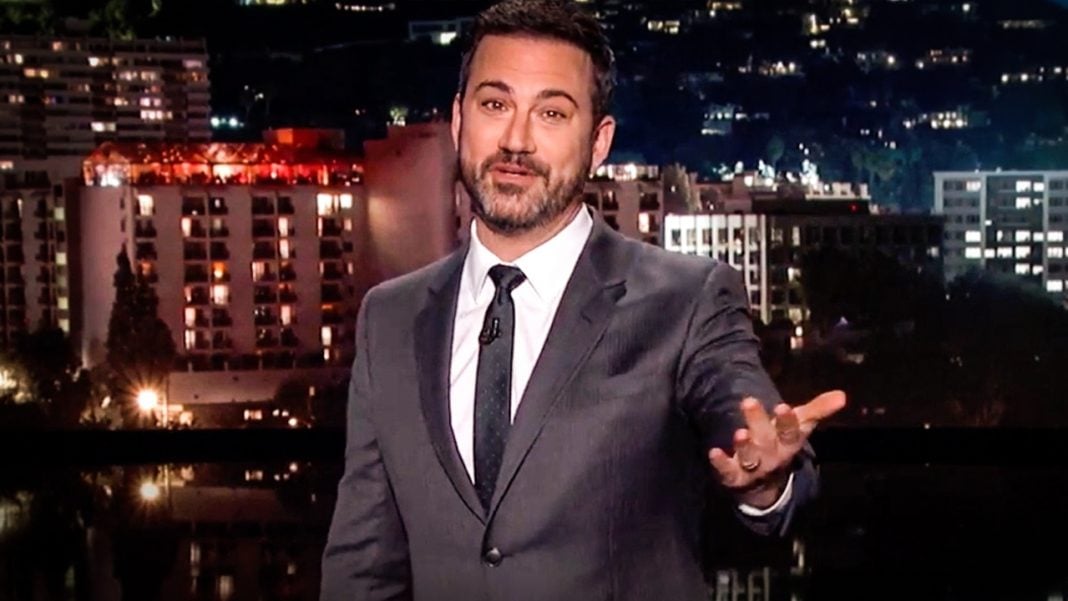 Late night talk show host Jimmy Kimmel was hit with a barrage of attacks from conservatives following his heartfelt monologue about healthcare and his son’s heart problems last week, but he wasn’t about to go down without a fight.  He hit back at Republicans this week by apologizing for believing that we should take care of one another as human beings. Ring of Fire’s Farron Cousins discusses this.

Last week, Jimmy Kimmel, on his late night talk show, gave a heart felt monologue about his newborn son, who had undergone heart surgery, and he talked about the need for health care, strong health care, dependable health care, in the United States. He told the story about his son to kind of bring it home, to humanize it, for the Republican party who doesn’t seem to want to look at the victims of substandard health care. They only want to look at dollars and cents. So Jimmy Kimmel did his best to show them a face, what could be the face of the American health care movement, and pleaded with them to please save American health care.

Well, the very next day and since then, Kimmel has been attacked by right-wing media outlets, right-wing newspaper, Washington Times, The New York Daily News, telling him, shut up. You’re a Hollywood elitist. What do you know? Well, last night, Jimmy Kimmel fired back at the Republicans and explained to them that, you know what, being a Hollywood elitist was always his dream. He was being sarcastic, of course. He talked about the fact that he grew up, like a lot of people in this country, dirt poor. But he managed to make it out of that. He talked about the fact that when he was a child, they had to drink powdered milk. They drank orange juice that came out of a can in the freezer, like most low-income Americans have to do. Republicans can’t relate to stories like that. So Jimmy Kimmel fired back and said, “Look, I am so sorry that I decided to go out there and say that it is our responsibility to provide health care for our citizens. That was very offensive of me.” Again, being very sarcastic. The entire clip of this monologue can be found in the description of this video. I encourage everyone to watch it. It is very powerful.

To be honest, that’s the kind of voice we need right now. I know Republicans don’t like these Hollywood types coming in and talking politics to them, but you kind of have to remember they’re the idiots who elected a reality TV star to be the President. So you kind of threw that argument out the window. Not to mention the fact that the idiot in the White House recently invited Sarah Palin, also a former failed reality TV star, Kid Rock, and Ted Nugent to come visit him. He’s got Omarosa, from The Apprentice, working on his staff. So, no, Republicans, you have no ground to attack any celebrities for getting a little too political when it doesn’t suit your specific ideology. Guess what? That’s perfectly allowable in the United States. I’m sorry that some of the most talented people in Hollywood don’t side with you. But, hey, you always got Kid Rock and Ted Nugent. I mean, right? A-list celebrities right there.

The point is, Jimmy Kimmel is trying to explain to an audience that doesn’t normally get these political diatribes, he’s trying to explain to them the face of American poverty, the face of American health care, why we need these things. Because it’s not just the poor, it’s not just the wealthy, everybody is affected by these things and that’s what Jimmy Kimmel was trying to explain to his audience and to the country. I think he did a damn good job of it. I hope he continues to do this and explain to Americans, in very basic, simple terms, why it’s important that we actually care about one another, that we care about someone else’s child. That is what this country’s supposed to be. If you want to say that America’s a Christian nation, like so many Republicans do, then you have to believe those things. You have to believe that we have to take care of one another. Otherwise, you’re just a typical Republican hypocrite.